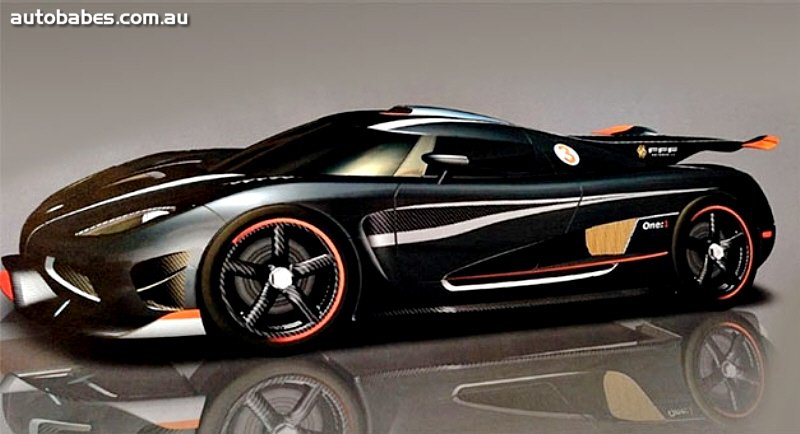 In an interview with Bloomberg’s News publication on September 30th, Supercar (actually HyperCar) manufacturer Christian von Koenigsegg discussed his passions for building the amazingly powerful and uniquely shaped supercars in his fleet and their individual inspirations.

What started it all, was a car in a Norwegian film von Koenigsegg first saw at age 5 called “Flaklypa Grand Prix.”

The film tells the story of a small-town bicycle repairman who builds a race car from nothing more than parts found in a junk yard, and despite ridicule from established automakers, goes on to win the 24 Hours of Le Mans.

Von Koenigsegg mentioned that he had watched the film a dozen times and was 100% certain that the hidden message for him was that “Anyone can make a great car!”

True to that belief and tradition, von Koenigsegg announced the new edition for his fleet was to be called a One:1 !

Possibly inspired by the Aston Martin name convention of 1-77 (in which only 77 cars were made and the buyer’s was a unique one of 77), the One:1 is named after its ambition to be the first assembly-line production vehicle,  to achieve a one-to-one ratio (hence one:1) of weight and horsepower.

This is a major leap over the 965 horsepower of the base-model Agera.

“Other cars have achieved this but by measuring dry weight — no oil, no water, no fuel,” said von Koenigsegg, and went on to say that the One:1 will take into account the weight of all required fluids and even the driver!

The concept is so advanced in the production schedule, that computer simulations have already been completed. We didn’t need a computer to tell us that the One:1 will be the fastest Koenigsegg yet, but the simulations to provide an astonishing capability figure of 450 kph or more !

Engineers expect the last number to be around 20 seconds. By comparison, it takes the Bugatti Veyron 45 seconds to achieve 400 kph.

If the current production timeline remains ion track, von Koenigsegg expects to have a prototype by the end of the year.

Should you feel that you have enough tucked away in the `super fund’, unfortunately you;re out of luck as von Koenigsegg says that the entire production run of One:1’s has already been pre-sold.

Although the sell price is not yet public, von Koenigsegg says it will be “substantially higher” than that of the current model Agera S.

Interestingly, despite the higher price, von Koenigsegg admits, that he’s almost certain he’ll lose money on the project, although that doesn’t concern him. He feels that the success of building a hypercar that sets new land-speed and acceleration records will only burnish Koenigsegg’s credentials, and future Koenigsegg cars will likely benefit from the trickle-down R&D originating with the One:1.

Although early renderings are only available, as below, the car is expected to share much of the style of the Agera S, with additional accessories and minor unique adjustments.

“No one needs a car like this,” he says, pauses and then smiles a cheeky smile;  “They just need to want one.”

For those in Australia, inquiries are welcome via Koenigsegg Australia’s official website ; http://www.koenigseggaustralia.com.au/

As Halloween approacheth, my spine shivers with delight as I recall our very first seductress ; Exotic Jewell from […]