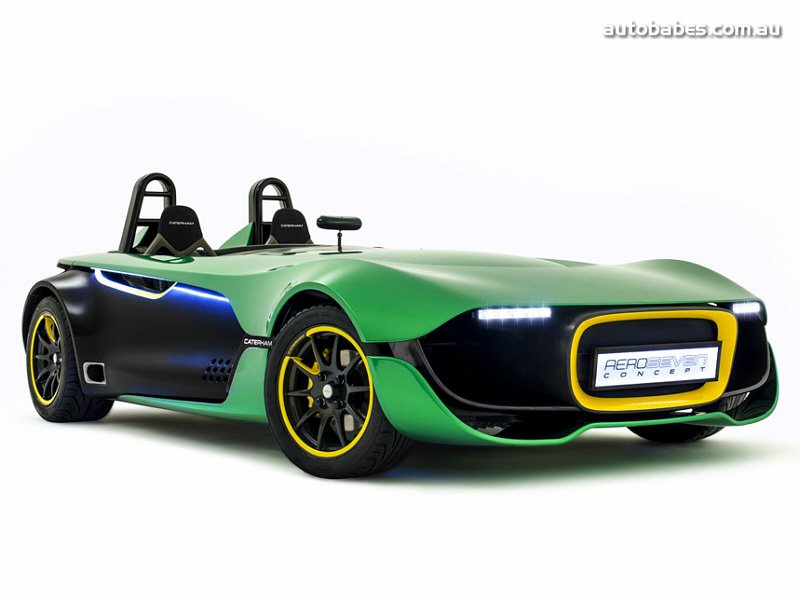 As the first model designed with significant input from all of the Caterham Group’s specialist business arms, the AeroSeven Concept signals the brand’s intentions in terms of product engineering processes, speed to market, as well as a hint to its styling direction for future models, including the all-new sportscar being developed in conjunction with Renault and due for release in early 2016.

The AeroSeven Concept, which draws heavily on methods used by the F1 team, will be the first ever Caterham model to be fitted with traction control. Thanks to a newly developed Caterham Engine Management System, drivers will be able to enjoy fully-adjustable traction and launch control functionality.

Based on an updated interpretation of the highly acclaimed Seven CSR platform, the carbon-fibre bodied concept vehicle, which will reach 100kph (62.5mph) in under 4 seconds, will initially draw its power from the normally-aspirated, EU6-approved, 240ps (237bhp) engine developed by Caterham Technology & Innovation for the recently launched Caterham Seven 485. Other engines are also being assessed for suitability.

Graham Macdonald, Managing Director of Caterham Cars, said: “Over the coming years, we will be expanding our range of sportscars as we look to meet the differing needs and desires of potential customers – from the lifestyle customer to the ultimate thrill-seeker. The AeroSeven Concept is the first model in that journey.”

Delivery of the production version of the concept model will begin in autumn 2014.

It is in the car’s full bodywork styling that the most striking differences to past Caterham products lies.

At each corner, the AeroSeven Concept will sit on Avon’s acclaimed CR500 tyres, the motorsport-inspired performance rubber that is also the OE fit on a number of Caterham’s high performance-orientated Sevens.

Achieving a delicate balance between inspiring performance and stringent EU6 emissions regulations, the 240ps (237bhp) Ford Duratec-based engine which will power the vehicle initially delivers its peak power at 8,500rpm, helping to propel the AeroSeven Concept to 100kph in under 4 seconds.

The engine – which also powers the European-homologated Caterham Seven 485 – is one of the world’s highest revving EU6-compliant engines. The two-litre unit is mated to Caterham’s six-speed manual gearbox driving the rear wheels.

Over the coming months, project engineers will be assessing a number of powerplant options for the final production version.

With expertise drawn from each corner of the Group to develop the bold AeroSeven Concept, the new car features a number of exclusive technologies and attributes not seen on any previous Caterham.

The Caterham Engine Management System is completely adjustable via steering wheel mounted controls. The system, which can be completely disengaged, has been developed by Cateham Technology and Innovation to enhance the AeroSeven Concept’s performance while giving complete control to the driver.

Inside, more innovations give a firm nod towards Caterham’s future ambitions.

The car’s default setting is ‘Race’ mode, the reverse of even the most track orientated vehicles. When the steering wheel-mounted button is depressed, ‘Road’ mode is engaged, altering the engine’s character by reducing peak power through a reduced rev limit.

The manufacture and tooling of components for the AeroSeven Concept will be split between Caterham Technology & Innovation in Hingham, Norfolk and Leafield, Oxon, Caterham F1 Team’s base. Production models will be constructed at the Caterham Cars factory in Dartford, UK.

– Sportsfan.com.au 27 May, 2014 – He knew he had the talent but Daniel Ricciardo says he never thought things would […]