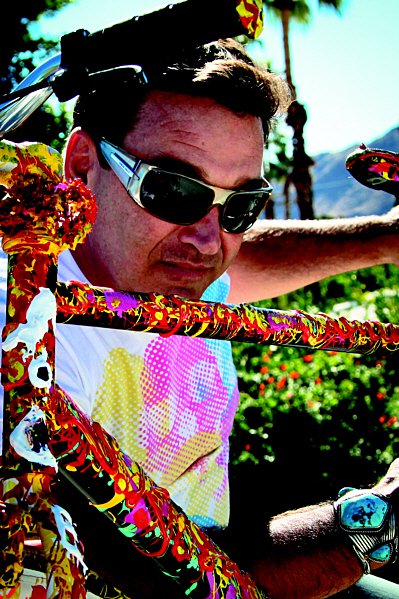 If you’ve never heard of him before, and strangely for someone so accomplished, very few people have, his name is Jack Armstrong.

No, he’s not related to Lance, but yes, he is related to Neil .. who walked on the moon.

Andy Warhol, who single-handedly created the  `Pop Art’ movement in the 1960’s, called him the `Last Wizard’, and his paintings and painted creations sell from $650,000 to $6 Million a piece !

Alice Walton, Paul McCartney and Michel Polnareff are three owners of Armstrong art and the list is growing. His works are some of the fastest appreciating artworks available.

Jack Armstrong is in fact, the number one Cosmic Artist in the world, and Master of Cosmic Extensionalism.

His major Wizardry is the ability to raise a substantial price tag from pretty much anything he places his trademark yellow and red paint on !

In these pics, is a bike that Jack painted over a period of 6 months in Palm Springs, California with Venice beach artist K-Fish (Kelsey Fisher).

On December 8, 2012, Jack debuted the worlds most expensive bike – the “Cosmic SuperCruiser ARTBike”, which is valued at $1 Million Dollars.