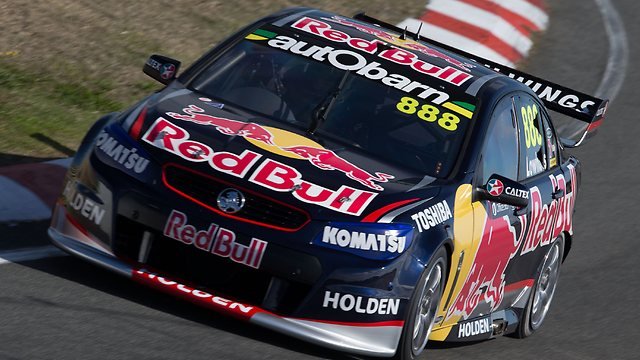 The sheer master class delivered by Jamie Whincup and Craig Lowndes in V8 Supercars’ US debut has left 26 other drivers scratching their heads on how to beat the most successful team in the sport.

Whincup and Lowndes ‘towelled’ the rest of the field in the first two races of the Austin 400 in Texas and while the racing was strong and a good spectacle, it was a domination reminiscent of a few years back.

For all the different winners that began the current season Whincup and Lowndes got it right in Texas. Just what the difference is between the pair and the rest is something rival teams appear to be struggling with.

The two teams that almost ran with Whincup and Lowndes were the Brad Jones Racing outfit with Fabian Coulthard’s Lockwood Commodore and the pair of Jonathon Webb and Shane van Gisbergen for Tekno Autosports. The rest were a good distance away from the front pace.

Coulthard was third in both races.

In both races the striking blue, yellow and red cars cleared out from the grid. Whincup made it look like a training session in the first race, as much as he denied it was an easy victory. Lowndes was not far off, challenging at some stages but not enough to strike.

For the first time in their history RBRA scored 1-2 finishes in successive races on the same day, having already scored a quinella this year but not in back to back races. Whincup said he won’t be taking the foot off for the rest of the weekend; or the year.

“I’m sorry that the podium was the same for both races, we would have liked to have spiced it up but that’s the way it goes,” Whincup said.

“We had a good run in Perth two weeks ago. We found a gain there and were going to see if it carried through until now, which it has. That wasn’t the case earlier in the season but now we feel like we can have a crack.

“But like last year and the year before we are not going to slow down; we will keep our heads down and keep improving the cars. It always tightens up.”

Whincup said the finite differences between the teams made it all that harder to stay on top.

“We are just able to fine tune the balance … all the other guys will no doubt make a step up. For sure it will be more competitive, we just hope we are at the next step when they get there.

“All sport all over the world is swings and roundabouts. Every team at the top plummets to the bottom at some point and then makes their way up again.”

He’s also taken 10 of the 22 pole positions in that time, with a total of eight drivers sharing the 13 other pole positions on offer between them, including Fabian Coulthard’s in Texas in race one.

But he says it’s all pure chance.

“It’s just a coincidence. I do like Abu Dhabi and most of that stat is down to the particular races in Abu Dhabi which I have always gone well at. There is no more to it than that.”

Despite the domination Coulthard holds hope that it won’t be a runaway year.

“We can still challenge. We can all beat them, we just have to have the right car on the right day,” Coulthard said.

A total of 57 races have been held offshore since the first overseas event at Pukekohe in 2001.

This was Whincup’s first overseas race victory in the debut race at an international venue.

Pic of the Day; Champagne

When POP musicians Arianna and Pitbull came together to advertise Fiat, you knew the video was going to be sexy […]