The 26 year old glamour model, is the 2009 Miss December `Playmate of the Month’, who broke off her previous engagement to the Playboy founder only a few days before their wedding in 2011. The pair reconciled soon after and have been planning the wedding since.

‘Having so much fun with friends and family’ .

Along with the change to her Twitter profile name, Harris has adopted the Hefner name as her own.

This was a very low key and private event in contrast to the lavish, 300 guest reception planned for the first wedding in 2011.

Harris, who also has a psychology degree, appeared on the July 2011 Playboy cover with a ‘runaway bride’ label across her lower half shortly after leaving Hefner before the wedding. She seemed more than comfortable and relaxed this time around though as she tweeted a picture of a room at the LA Playboy Mansion that showed an arch of white and pink flowers.

Only around 24 white chairs could be seen set out for the ceremony guests, which included KISS Bass guitarist Gene Simmons, comic Jon Lovitz and baseball star Evan Longoria.

The bride wore a strapless fishtail gown in soft pink, which she called her ‘mermaid dress’, while Hefner wore a characteristic black dinner jacket.

The glamour model, who was born in San Diego to British parents, said she asked for Christmas ornaments at her pre-Christmas bridal shower to help decorate Hefner’s famed mansion.

‘I was deciding what kind of shower I wanted, and I thought I didn’t really want a lingerie shower, since I have more than enough lingerie,’ Harris told Us Weekly magazine.

Hefner is no stranger to marriage, and has been married twice before; his first marriage to Mildred Williams of course ended in divorce in 1959 with the rising success of Playboy magazine, and his second wife Kimberley Conrad, who is also a former Playmate, divorced Hefner in 2010 after a lengthy separation.

Hefner has two children from each marriage. 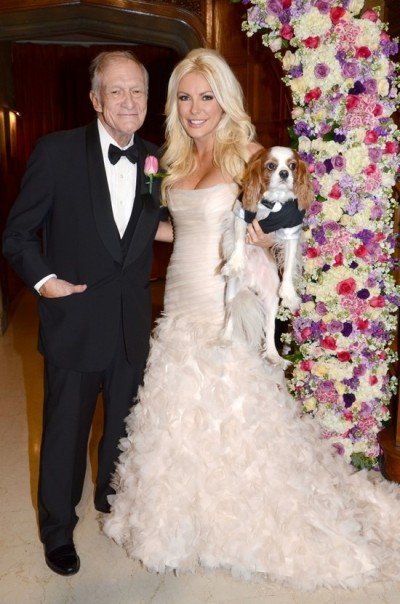 Jessa Hinton, a former Playboy Bunny at the Palms Playboy Club, also used to double as a hostess for Victory […]

Angela White for Playboy Plus – Getting Cosy

This is Angela White’s second collaboration with PlayboyPlus. This first set, Professional Confessions, can be see here. We bring you […]