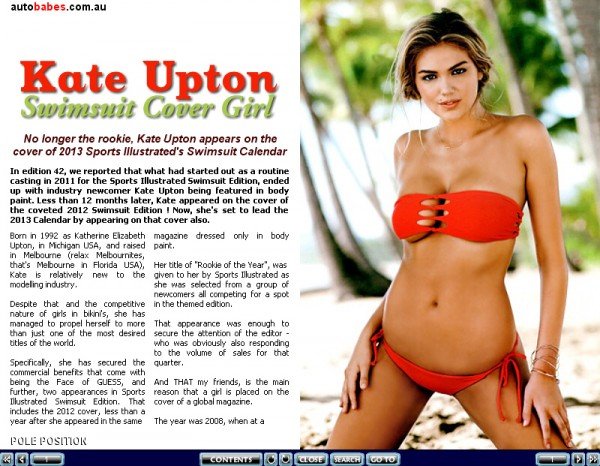 No longer the rookie, Kate Upton appears on the cover of 2013 Sports Illustrated’s Swimsuit Calendar

In edition 42, we reported that what had started out as a routine casting in 2011 for the Sports Illustrated Swimsuit Edition, ended up with industry newcomer Kate Upton being featured in body paint. Less than 12 months later, Kate appeared on the cover of the coveted 2012 Swimsuit Edition ! Now, she’s set to lead the 2013 Calendar by appearing on that cover also.

Born in 1992 as Katherine Elizabeth Upton, in Michigan USA, and raised in Melbourne (relax Melbournites, that’s Melbourne in Florida USA), Kate is relatively new to the modelling industry.

Despite that and the competitive nature of girls in bikini’s, she has managed to propel herself to more than just one of the most desired titles of the world.

Specifically, she has secured the commercial benefits that come with being the Face of GUESS, and further, two appearances in Sports Illustrated Swimsuit Edition. That includes the 2012 cover, less than a year after she appeared in the same magazine dressed only in body paint.

Her title of “Rookie of the Year”, was given to her by Sports Illustrated as she was selected from a group of newcomers all competing for a spot in the themed edition.

That appearance was enough to secure the attention of the editor – who was obviously also responding to the volume of sales for that quarter.

And THAT my friends, is the main reason that a girl is placed on the cover of a global magazine.

The year was 2008, when at a tender age of only 16, Kate cast for Elite Model Management and was signed on the spot.

She then made the move to New York City to benefit her modelling career and was signed by IMG Models with whom she is currently.

Among the first clients that she represented, were the retail clothing brand Garage, and later Dooney & Bourke who specialize in fashion accessories (handbags, jewelry etc).

Of course she soon after modeled for Victoria’s Secret and Beach Bunny Swimwear.

Besides the Sports Illustrated feature and cover, Kate’s management have kept her pretty much off the glossy pages of men’s magazines.

She has however appeared in Complex and Esquire as “The Woman of the Summer!”

A massive surge in her popularity came with a video that went viral in 2011 that showed her doing a hip-hip dance move called the Dougie (where you shake the body in a shimmy whilst dragging the hand through the hair).

Capitalizing on that popularity, Kate appeared in an American TV series called “Tosh O”, which is a comedy starring Daniel Tosh. On it she performed a slap stick gag where she appeared to be stabbed by a banana.

In July of the same year, Kate played in the 2011 Taco Bell All-Star Legends & Celebrity Softball Game at Chase Field in Phoenix, Arizona.

Her acting debut however, wasn’t until she appeared in the film Tower Heist as Mr Hightower’s Mistress. She followed that almost immediately with an appearance in the Three Stooges as Sister Bernice.

But it was during an appearance on the Late Show with Dave Letterman on February 13th 2012, that she announced her cover appearance for the 2012 Sports Illustrated Swimsuit Issue.

On February 18th, she appeared on Saturday Night Live in the sketch “What Up with That” where she appeared as the middle guest.

Further TV and some magazine appearances are planned for this year of course as her management secure her further branding power with each new found popularity spike.

As any manager would !

On the OnLine Media front, she has appeared on AskMen.com, FHM.com EquineChronicle.com, where she discussed her equestrian skills, and Complex.com amongst others.

With her appearance on the 2013 Calendar cover, Kate has a magnificent career ahead of her, and with beauty like hers, nothing stands in her way.<

This is an excerpt from Edition 46 – The West Coast Swimsuit Edition. See more of Edition 46 from January 4th 2013, and all back issues FREE after registration.