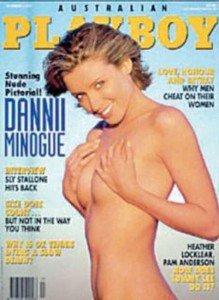 The X-Factor judge, Dannii Minogue has revealed to journalist Piers Morgan in an ITV interview, that she posed nude for Playboy Australia in 1995 in order to pay her insurmountable debt !

At that time, she had just separated from her actor husband Julian McMahon, and was in a great deal of financial difficulty, with a reported debt close to AUD$300,000 in today’s exchange rate.

She has admitted that she did this against her family’s wishes and in particular against the advise given by her father.

“My parents didn’t want me to do it.” She told Morgan, “My dad was saying, ‘Doing this is forever – you can never, ever change it’.”

“Kylie knew why I was doing it. I could have asked her for the money, but it wasn’t in my nature.”

“I never wanted to admit the trouble I was in. I should have been looking at my finances.”

However, Dannii says she never had any regrets and to this day is proud of her pictures.

” I feel relieved that people know why I did it – it’s a huge weight off my shoulders.”

” It was actually fun and I did feel liberated. I looked at the pictures and thought, ‘I look all right!’. “

She does however speak about the anguish in her father’s eyes, and mentions that the fee she was paid had to justify that. There was no disclosure as to how much she was paid though.

The 38 year old, who is currently dating former Rugby League player Kris Smith, 7 years her junior, says it took her a lot to get over the split with Julian.

She also revealed that she was not in any rush to re-marry again for fear of repeating any past mistakes.

When Piers Morgan asked if she would consider getting married to Kris, Dannii replied: “I don’t know, I guess he’d have to ask me.”

“And I’d want him to be the first person to hear the answer – not you, Piers.”

Pic of the Day; Harley Dean Features in Edition 93 – The Super Glamour Edition