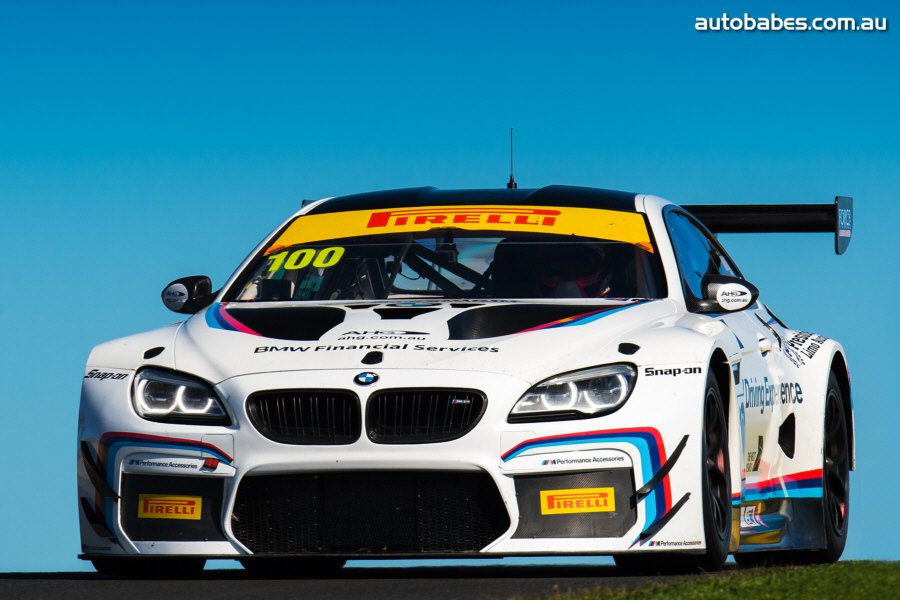 Six months ago BMW Team SRM unveiled the stunning new BMW M6 GT3 in Melbourne ahead of its competition debut on the streets of Adelaide alongside the V8 Supercars during the Clipsal 500. Since then, the team – run by four-time Bathurst 1000 champion Steven Richards – has been on a solid development program, a program focused around the Australian Endurance Championship for which the second event in Sydney showed the true potential of the twin-turbo V8 powered beauty from Munich.

“We always knew the great strength of the M6 would come as we embarked on the endurance events this year,” Richards admitted after qualifying third at Sydney Motorsport Park ahead of Sunday’s 101-lap three hour battle.

“Since the start of the year we’ve been on an aggressive development program in consultation with Germany, and what we’ve learnt in a very short time we’ve been able to apply to the car, and send back to Europe to assist in the ongoing development of the M6, development which has seen it winning now in Europe and the USA.

“The endurance race format is much kinder to us with my status as a professional driver, and the additional time penalty we receive as a result of that can really stall us during the Sprint races, but during the endurance races and with everything they bring, it’s much easier for us to stay with the lead pack, and this weekend we were able to achieve that.”

Both Richards and experienced team-mate Max Twigg were right in the mix during qualifying, Twigg an impressive 16th amongst a number of the categories leading drivers and just over two seconds off pole, whilst Richards was right in the fight for pole from lap one, ultimately stopping the clock in third position, just half a second shy of the top spot.

“That was fantastic,” he admitted afterwards. “It was only a matter of time before we were able to bring the car to the front of the field – our single lap pace is as good as the best of them now, it’s just the longer runs we need to work on, but I think that despite our starting position just outside the top ten (combined qualifying times for both drivers set the starting grid), we’re well placed to battle inside that group.”

Off the inside of the sixth row for the start of the 101-lap journey, Richard was quickly in the battle for the top six, moving to ninth very quickly, but as the session drew on, the #100 M6 GT3 began to drop back slightly suffering much higher tyre degradation than those around them.

“Again, it’s just experience with the car and experience with a new car on these circuits,” Richards admitted. “Tyre degradation (the drop in performance of the tyre from new to used) is quite high for everyone at Sydney Motorsport Park, but for us it has proven higher again, and that’s just down to time with the car under race conditions. It hasn’t affected us as badly elsewhere, but here it’s been a real battle, we’re as fast as the leaders for about seven laps, then we drop off half a second to a second a lap.”

Despite the challenge, Richards managed to work himself back inside the top ten ahead of the compulsory put stop where again they were delayed by the shared driver grading penalties that Richards and Twigg incur, dropping Twigg back down the order, but he too charged to be seventh again at the second stop, although by then the team were wearing a few battle scars..

“Both Max and I made contact with Audis and both suffered a little bit of panel damage – me trying to defend the inside line into turn four against a car that clearly hadn’t seen me, and that damaged the bonnet of the car, then Max got caught up in the typical GT3 corner apex contact that occurs in a big way because of the limited vision we have. Sadly that broke the front floor under the car and pushed the bonnet up, but in both cases we were able to push on.”

Ultimately the gorgeous white M6 GT3 crossed the line in position 16, and with more valuable data in the books from which to prepare for the coming two events in New Zealand.

“2016 was always going to be a year of learning and of developing the car,” Richards admitted. “We were prepared for that from day one, and I’m happy to say that at every step we’ve moved forward, but with any new endeavor, especially with a car from which little was known before the season started, it’s going to be about learning on the run and getting on top of things as quickly as we can.

“To be third in that second stanza of qualifying was significant, because it means we can dial in the pace, our next step though is to be able to manage the tyres to maintain that pace across a full race distance, and that really only comes under race conditions. So despite finishing outside the ten – and I think we’re a top ten car – we have gained immense knowledge which we’ll apply in New Zealand, and I’m sure you’ll see another significant step forward. Remember, the teams we’re competing against either have multiple entries from which to attract additional data, or they’ve been competing for more than a single season, so they have the jump on us – but we’re coming which is I am sure, why a number of them were looking over their shoulders at us quite a bit this weekend!”

For the BMW Team SRM operation that’s it for GT competition on Australian soil for 2016, now it’s off to New Zealand for the first of two events in a touch over two weeks, beginning with the first major event of the revamped Hampton Downs circuit to signal the third round of the Endurance Championship (28 – 30 October), ahead of the final round of both the Sprint and Endurance series’ at Highlands Motorsport Park during the second weekend of November.

Win for Aston and Ferrari at GT Asia Series Round 3

Against much resistance, and tough competition, the BMW i3 has become the first all-electric car to be awarded the Wheels magazine car of […]