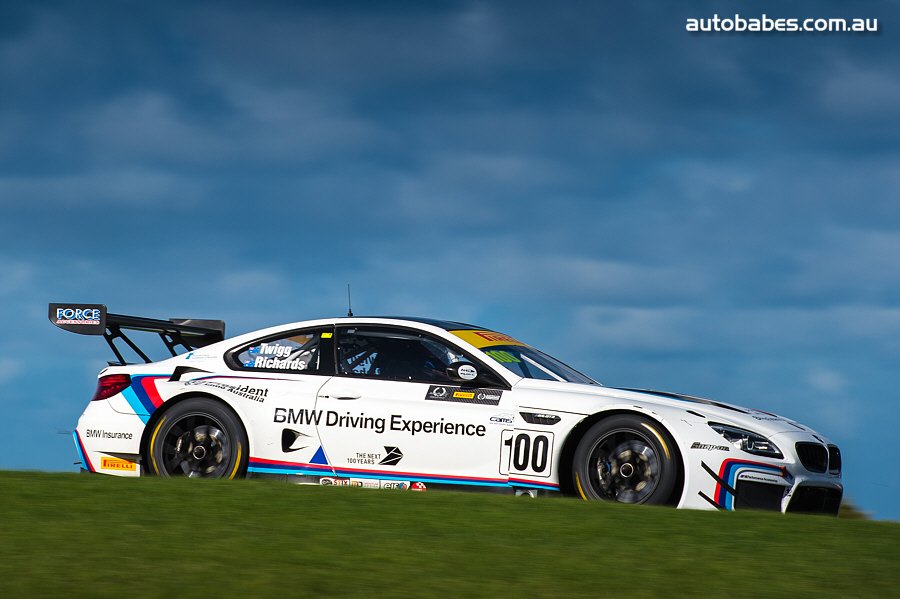 It’s hard to believe that this weekend the Australian GT Championship will contest it’s penultimate round on the streets of Townsville, after what has been a challenging debut year for BMW Team SRM, but carrying on the confidence of running with the leaders at Phillip Island last time out, team leader Steven Richards is full of confidence.

“Phillip Island saw us take a significant step forward and show that we were capable of mixing it with the leaders,” Richards admitted. “We always knew we’d get there, but with the way Australian GT is structured with it’s wide range of parity penalties, we were always going to be up against it in the shorter races, and starting the season with an unproven car also gave us some challenges to deal with, but I think Phillip Island was the turning point.

“Honestly this weekend will also be a challenge, because our driver gradings and resultant compensation times make it hard for us unless there’s a Safety Car intervention to allow us to close up some of that deficit, but I think importantly we’ve found some speed, and we’ve also uncovered some valuable data, something you only develop with time.”

Neither Richards nor team-mate Max Twigg are strangers to the Townsville circuit, in fact 12-months ago both figured prominently at the Series’ most northern venue, Twigg claiming an Australian GT podium finish, whilst Richards did the same in Carrera Cup, a feat he has managed regularly across the last four years on the demanding street circuit.

“I like the circuit, and have been going there every year since it first opened in 2009,” Richards added. “It’s a bit of a mix of street circuit and established circuit, with a couple of tricky sections which will challenge the rookies, so hopefully Max and I can exploit that and qualify further forward in the field.

“Regardless, we’re expecting a good weekend. The weather looks promising for us, not too hot, but dry, and the car has never been better, so we’re looking to take some big positives from the weekend before we turn our attention back to endurance mode next month with a three hour race in Sydney.”

For Twigg he carries the confidence of finishing on the podium 12-months ago on the 13-turn 2.85-kilometre circuit, and admits to being quietly confident..

“I love the circuit, so am more than happy to be back there, and I think with the large number of laps we turned at Phillip Island and the data we now have on the car, we’re definitely going to take a forward step this weekend. The big thing will be staying out of trouble across the opening laps, which means that qualifying will be important, but I think we might surprise a few people.”

The #100 BMW Team SRM M6 GT3 will turn its first official laps at Townsville in practice on Friday, 8 July with a single 20-minute practice session, ahead of the first of two 20-minute qualifying sessions which will determine the grid for the fifth round of the Australian GT Championship. The team then contests two 60-minute races with compulsory pit stops, one each on Saturday and Sunday.

Typically Townsville’s weather is beautiful this time of year with predictions of clear sunny days in the mid 20s, although cloud cover could change conditions slightly come Sunday, but otherwise it looks like being a dry weekend.

Every session from opening practice will be broadcast live on FOX Sports 5 (Channel 506), but you can also keep up to date with the BMW Team SRM team across the Townsville weekend by visiting; www.facebook.com/BMW_Team_SRM and get involved with the conversation on Twitter; www.twitter.com/BMW_Team_SRM

Much anticipated, spied upon and talked about, photos of the BMW M8 Series have been unveiled by BMW! Officially known […]

Australian GT; M-Motorsport looks for success on the streets of Townsville

A year on from the launch of the BMW M4 Coupe, BMW M Division is presenting an initial preview of […]