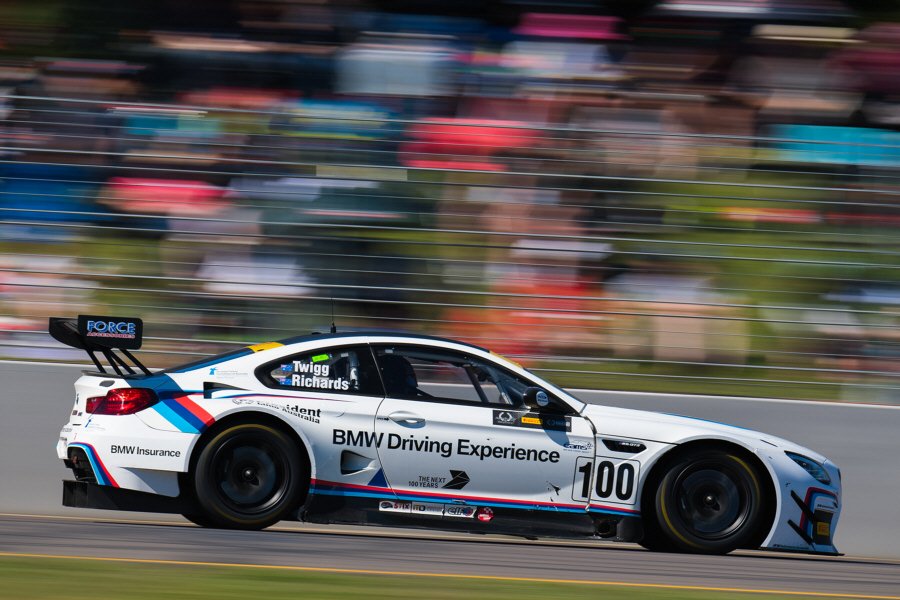 With the Australian GT ‘sprint’ series all but completed, BMW Team SRM has the opportunity this weekend to apply a lot of that knowledge to the endurance format during the second round of the Australian Endurance Championship at Sydney Motorsport Park.

Contesting the popular ‘101’ format (101-laps), reigning Bathurst 1000 champion Steven Richards and co-driver Max Twigg are looking forward to the opportunity to apply all that knowledge across the three-hour race scheduled for Saturday morning.

“Both Max and I have enjoyed our debut season with the new BMW M6 GT3, and despite the frustration of often finishing back down the order – in a big part due to my driver grading as a professional driver – we’ve been able to find some huge improvements because we’ve spent much of the season to date on a big development push, and this weekend we’ll have the perfect opportunity to apply all that knowledge,” Richards explained.

The Sydney event is the second on the program for the new endurance series, and Richards’ words are supported by the pace that the gorgeous white BMW had during the opening event at Phillip Island earlier in the year.

“That event proved that we were on the right path with our program after I’d qualified just four tenths off the pole-sitting car of Garth Tander, a car which had enjoyed more than a year of development, so we knew we were heading in the right direction.”

Frustratingly, despite running inside the top ten throughout the race, a string of tyre failures dropped the #100 BMW M6 GT3 further down the order than it deserved.

“I’ve said all along, our best chance with the car this year with our early season lack of development and my driver grading penalty [delivered to the team during the compulsory pit stop each sprint race as an extra time penalty], that our best chance would come with the endurance races, and Phillip Island showed that.

“One of our big challenges had been heat, but we’ve overcome that throughout the year through what we’ve learnt and with some upgrades from Germany. This weekend in Sydney we’re expecting cooler temperatures too, so that will play into our hands nicely with the twin-turbo V8. We also tested at SMP recently and applied everything we’ve learnt this year in the six prior events we’ve contested, and the results were encouraging, so keep an eye on the #100 BMW M6, I think we just might surprise a few people!

For Richards – a former podium place-getter in Australian GT at Sydney Motorsport Park – and Twigg, who admits that SMP is one of his favourite circuits, they get their first chance to test the BMW on Friday with a single 20-minute practice session ahead of two 20-minute qualifiers to set the grid, then the big race gets underway from 8:05am on Saturday.

Every session from opening practice will be broadcast live on FOX Sports 5 (Channel 506), but you can also keep up to date with the BMW Team SRM team across the Townsville weekend by visiting; www.facebook.com/BMW_Team_SRM and get involved with the conversation on Twitter; www.twitter.com/BMW_Team_SRM

Much anticipated, spied upon and talked about, photos of the BMW M8 Series have been unveiled by BMW! Officially known […]