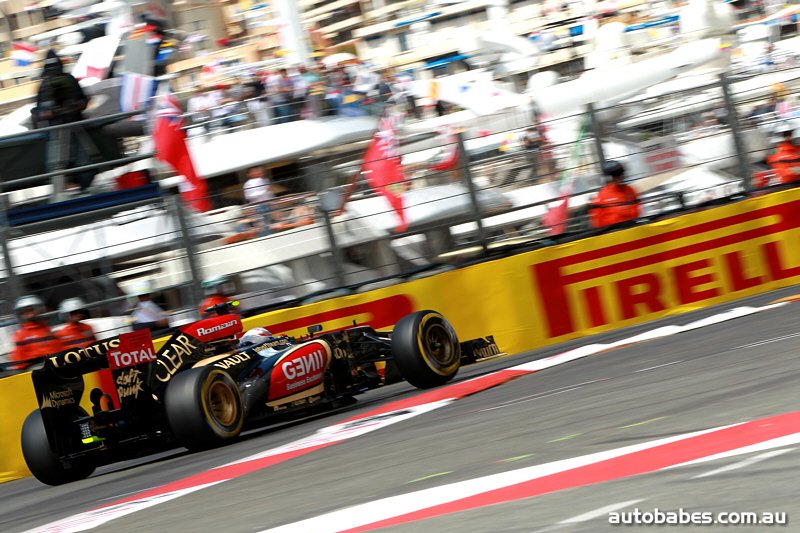 Kimi Räikkönen salvaged a solitary point on the final lap of an incident-rich Monaco Grand Prix after a late puncture forced him to pit from fifth place. Having re-joined the field in thirteenth, Kimi made back three places in the last two laps to take his tally of unbroken points scoring races to 23.

Romain Grosjean’s race ended early following damage to his car after making contact with the rear of Daniel Riccardo’s Toro Rosso on lap 62. Kimi remains second in the Drivers’ Championship, but is now 21 points behind leader Sebastian Vettel. The team remains in third place in the Constructors’ Championship, now eleven points from Ferrari.

“It was a really disappointing day. Because of one stupid move from Sergio [Perez] we’ve lost a lot of points to Sebastian [Vettel] in the Championship and you can’t afford to lose ground like that. He hit me from behind and that’s about all there is to it. If he thinks it’s my fault that he came into the corner too fast then he obviously has no idea what he’s talking about. It’s not the first time he’s hit someone in the race; he seems to expect people to be always looking at what he might do, then move over or go straight on if he comes into the corner too quick and isn’t going to make it without running into someone. Not the ideal weekend but there’s nothing we can do about it. At least we got one point back at the end.”

“Daniel [Ricciardo] seemed to be really struggling with his rear tyres and they looked to have a lot of graining. I’d been following him for almost all of the 61 laps but I was caught out by him braking early in the middle of the circuit and there was nowhere for me to go. It’s a frustrating end to the weekend, but the real damage was done in qualifying when I didn’t get through to Q3. That was Daniel again who I was held up by, but it certainly wasn’t my intention to end my race in the back of his car! Now we just press the reset button and head to Canada hopeful of a better weekend all round.”

“This is certainly not the weekend we wanted. Kimi was impeccable all weekend once more and his race was ruined by another driver making unnecessary contact with his car. This caused a puncture and basically ruined his race. Romain had a difficult weekend, but showed fantastic pace when he had a clear track in front of him. We’ve lost ground in both the Constructors’ and Drivers’ Championships this weekend so we’ll be pushing twice as hard when we get to Canada to make amends. On a more positive note, we were extremely proud to have Daft Punk – making only their third public appearance in twenty years – join the team for the race, and would like to express our gratitude to Columbia Records for helping make this concept a reality. The team has a truly unique brand image, and we’re keen to continue this unorthodox approach moving forwards.”

“A very frustrating race for us”

“A very frustrating race for us. Both of our cars were bottled up in traffic almost all of today, which is what you can expect in Monaco if you’re not leading. Romain was unfortunate to get caught out by the car in front, but he has received a ten-place penalty for Canada which will compound today’s woes. Kimi was running strongly in fifth position, but his race was completely compromised by the late pit stop we were forced to make. That he was able to make back three places in the last two laps shows just how hungry he is. We head to Canada wanted to return to business as usual.”

Ricardo Penteado, Renault Sport F1 Team Support Leader
“One point from that sort of race is ultimately disappointing, particularly as Kimi was in such a good position for 90% of the Grand Prix. From the engine side of things it has however been a good weekend. Both cars were using units for the third race to give us flexibility later in the season when the standings will be tight. Aside from the engine on Kimi’s car running a bit hot under safety car conditions there were no issues, which gives us a stable platform for the coming races.”

– Press Release Kris “Killa” Walton screamed to a Race 1 win in front of local partner Rentco, who are […]

–  Appears in Edition 3 CoverGirl – Kylie Prindesis – The Full Featured Gallery is available to Members Only. Register or Upgrade today for […]