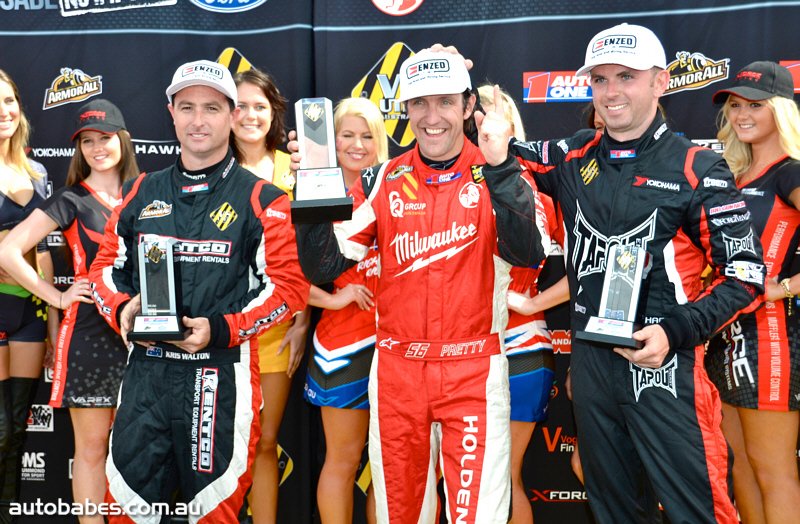 Nathan Pretty claimed Race 3 and Round 5 of the Auto One V8 Ute Racing Series – protected by ARMOR ALL, whilst Rhys McNally claimed Race 2 at Sandown Raceway, Sunday, 15th September.

Race 2 saw Thirsty Camels Craig Dontas start on Pole due to the top 11 reversed grid race and he had a great start, holding the lead until lap 6 when McNally saw a gap in his Stratco Holden and went for it. There was no stopping McNally once he was in front and the West Aussie sped home to victory.

“It was great to get the car back up the front, we had a shocker in Townsville and lacked pace, so it was good to have the Ute towards the pointy end and score some good points to try and keep the championship alive,” said McNally.

Dontas drove really well to hold second with mounted pressure from teammate Nathan Pretty, Kris Walton and Ryan Hansford. Teammates Walton and Hansford both had issues and forced out of the pack, Hansford struggled with a broken rim  and retired on the final lap, whilst Walton backed off, steering clear of any damage to avoid his 35 championship point suspended penalty he received from contact with Pretty in Race 1.

Pretty held on to third and Elliot Barbour fourth. Andrew Fisher had a great drive in his Jesus Racing Holden to hold out Walton to claimed fifth overall. Mike Almond had a great result on his debut to come home in sixth. Kim Jane, Ryal Harris and Tony Longhurst rounded out the top ten.

Gerard McLeod had a spectacular battle for eighth position with “The Assassin” Jane who took McLeod in lap 10. McLeod then had a tussle with Series leader Harris who started from position five but stalled on the grid with at least half the field passing him. He made up good ground into 11th but made a risky move on McLeod causing contact with the Macmahon Mining Ute. Harris finished in ninth for the race but was penalised with a 26 second post-race penalty (equivalent of a drive-through) for the incident.

Tony Longhurst rounded out the top ten for Race 2 in The Boat Works Holden.

Jesse Dixon received a post-race penalty of 15 seconds for contact with Jeremy Gray, which continued into the paddock, Gray having fierce words with the young Rookie.

Phonsy Mullan walked away with the SS Inductions Hard Charger Award and $500 cash for his impressive drive overtaking 10 Utes to finish his Hi-Tech Oils/ Ramjet Cold Air Inductions Holden in 15th overall for the race.

Pretty started his Milwaukee Ute on the front of the grid alongside Rhys McNally for Race 3, who had a ripper start in his Stratco Holden, however locked up going into turn one running wide off the track and handing his lead to Pretty. Once the local was out in front there was no stopping him, he drove to victory sealing the race and round win almost 4 seconds ahead of the rest of the field.

“It was awesome after my little spit yesterday, I calmed down overnight and all the rest of it and put my head down and it turned out really well, so pretty happy for all the guys,. They’ve been working pretty hard back at the workshop and we’ve actually been testing now for a change and that’s what’s paying dividends, actually getting out on the track prior, doing some miles and tweaking it and the results are showing that,” said Pretty.

The battle was on for second between Dontas and Elliot Barbour. The Guide Dogs Victoria bonnet of Barbour kissed the back of the Thirsty Camel Ute, sending Dontas off the track. The South Aussie was able to recover his place, however Barbour was penalised with a drive through penalty, which he took in a controversial fashion (4 laps after being called in).

“It was a good Race, a lot of fun. I ran up the front with the guys, I stuffed qualifying but it was good to get back up there. I’m a bit annoyed to get stuffed over by Elliot (Barbour) but good to be there, I had an absolute ball,” said Dontas.

Ryal Harris was now on the hunt for second and took Dontas on lap 7, which was enough to hand him 3rd overall for the Round. Dontas settled with third for the race and did well to hold off Almond’s Copyworld Racing Holden and Andrew Fisher who finished 4th and 5th respectively.

Andrew Fisher walked away with the Masters Award and Jeremy Gray the ARMOR ALL Best Presented Award in his JMG Racing Ford.

The V8 Utes will next hit the track for Round 6 of the Auto One V8 Ute Racing Series – protected by ARMOR ALL at the Bathurst 1000 event 10 – 13 October at Mount Panorama but to recap on all of the action from this weekend tune in to Network Seven next Saturday, 21st September to watch the post show.
.

Kass Dawson, who accepted the role of Facebook’s head of Automotive, Global Vertical Strategy, earlier this year, is scheduled […]