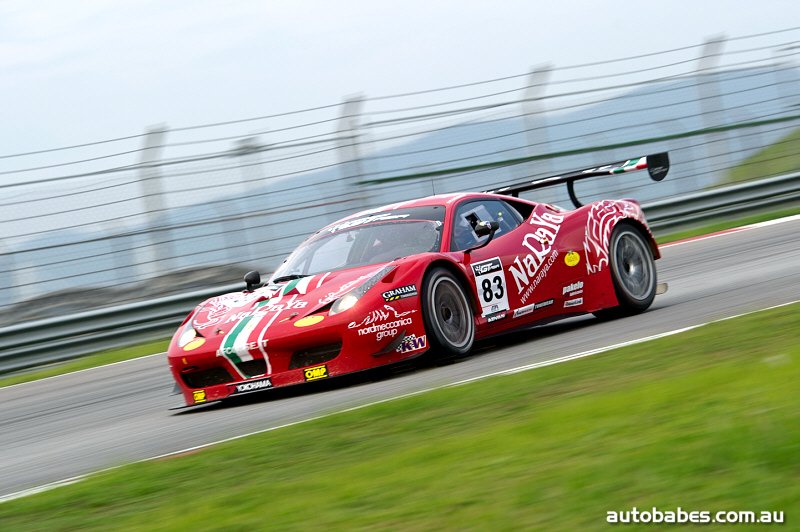 Thai driver, Pasin Lathouras claimed the win in a last minute overtaking effort on the lead Aston Martin in an exciting GT Asia Series Round 7 at Sepang International Circuit today.

Lathouras who started the race in seventh, behind the lead Aston Martin, three Audi R8 LMS Ultras, a Ford GT3 and a Porsche 997 GT3R, managed to maintain his position at the start and began to pick up the pace midway through the first half of the race.

Then eleventh placed starter, Hiroshi Hamaguchi in the McLaren 12C GT3, moved up the grid into position behind Lathouras and claimed sixth by lap 5.

As the pit-stop window opened, Lathouras followed the Porsche driven by Li Zhi Cong to pit in and thereafter proceeded to battle one another for a few laps before Lathouras found a way past the Chinese driver at turn 4 of lap 13.

“It was really exciting. But I didn’t really have a good start but the McLaren had a really good start that caught me off guard completely. I just tried to maintain my position and a consistent pace throughout.

“I then noticed the Porsche of Peter Li was in front and I was gaining him towards the braking so I kept trying to brake later and later. I caught up to him at turn 1 and by turn 2 he went a little bit wide, so I took the outside and then I tried to pressure him a little bit and by turn 4 I got the inside line and got the position.

From there, Lathouras then managed to catch up to the leading Aston Martin who was caught up behind a back-marker and was unable to find a way past. The duo then pressured the Audi R8 LMS Cup, driven by Benjamin Lee, and while Lathouras found a way past, Yu was stuck behind. Then as luck would have it, Yu spun at turn 5 allowing Li, who was running in third at that point, to take second place.

“After finding a way past Peter, I was chasing Frank (who took over driving duties from Darryl O’Young) in the last couple of laps, it was just a really unfortunate incident for him as they had a really good drive throughout the race.

“As for tomorrow, I have to watch the start because a lot of these drivers are experienced at the start and I am still learning. Even though I will start in P3, I will just have to try and secure it and hope I will have a result like today” ended a happy Lathouras.

“I didn’t have have a really good start and I managed to only maintain my P4 position. At the first part of the race I was having a good fight with the McLaren and I just tried my best to keep my car in the right line while pushing” said Li at the Post Race Press Conference.

“After the pit stop, I just tried to keep as small of a gap as possible to the cars in front of me. I think I had a good race today and I am really happy with the results. Tomorrow I start from pole so I will try my best to get the best result I can for the team” ended Li.

For O’Young and Yu, finishing on the podium was still a consolation of their hard drive today. O’Young took the ‘easier’ stint for the duo and said, “Its always easier to start from the front row. I had a good start and the car was perfect. I was really pushing hard to try and extend the lead as far as I could then my team came on the radio on the last three laps and said ‘okay, three laps to go, you can push now’ but I said ‘I’ve been pushing!’” he said with a laugh.

“It was getting a little hot on the brakes but besides that the car ran consistently and then I passed it on to Frank” he ended.

Yu then continued, “Darryl had a six second lead when he passed the car to me. We did a perfect pit-stop and when we came out we were still in P1. So it was not a difficult drive for me to start with. Then the team told me the Ferrari was behind, maintaining a 4 second gap, so I just maintained my pace.

“Then there was a back marker, in turn six I believe, he couldn’t decide what to do and bunched me up which cost me a lot of time and Pasin came right behind me. I think the two of us freaked him out and he went left, then right and back again which cost me the lead. Because of the lines, he pushed me on the grass in turn 6 and then at turn 7 I think I hit the curb a little too hard and spun, and then Peter passed me” ended Yu with a sad smile.

The McLaren had a great start, moving up the grid from eleventh to fourth by the end of the first half, Hamaguchi then passed the car to teammate, Mok Weng Sun at the pit-stop. Mok then dropped down the order back to eleventh and worked his way back up to finish the race in fourth.

The pairing of Earl Bamber and Samson Chan had a fantastic race battling at the start with the Audi of Alex Yoong and Francis Hideki Onda, the Craft Racing AMR drivers finished the race in fifth ahead of a trio of Audi led by Marchy Lee/Jeffrey Lee, Cheng Cong Fu/Philip Ma and Yoong/Onda.

Team Clearwater Racing’s Lamborghini LP560 GT3 driven by the pairing of Ro Charlz and Tunku Hammam finished the race in ninth after Hammam dropped down the order toward the end of the race after an incident that caused him to spin on turn 2.

Malaysian driver, Rizal Ramli and his Dilango Racing teammate, Dilantha Malagamuwa was given a drive through penalty for a pit-stop infringement, causing them to finish the race in tenth, ahead of Siu Yuk Lung in LKM Racing’s Porsche 997 GT3R.

Wayne Shen was the GTM Class winner after maintaining a steady pace throughout the race, in second for the most part. Luck was on his side as the pairing of Carlo Van Dam and Jacky Yeung in the Audi R8 LMS Cup was given a drive through penalty for a pit-stop infringement, propelling him to first for GTM. Van Dam/Yeung finished second ahead of John Shen in third.

“I had fun today. I knew that Carlo was very fast and then I had some compensation time to make up so I had a long day ahead but in the end it turned out fine for me. In the beginning I managed to keep up with the pack but by lap three they started pulling away.

“Pierre my team manager kept me informed throughout the race on the gap and I was just managing the gap and as long as I don’t give away too many seconds. I was also very lucky today because they had a drive through penalty so then I knew I had a chance” said W.Shen with smile.

Yeung was happy with the new partnership with Van Dam and despite the penalty, he was happy with the new car and the outcome, claiming his first podium of the season. “Its fantastic to get my first podium of the year, the best result was fourth I think in Fuji Speedway. I am loving the Audi as it reacts the way you want it to. As for having a driver partner, I have already proposed to Carlo to drive with me for the full season next year, so we will see”.

“It was a good race and was quite exciting and the weather was good with the dry track, so it was all good. Its quite a challenging 50 minute race so it was very tiring, at the end of the race you are just exhausted. I was actually hoping for rain since I seem to do better when it rains, so I am hoping it will rain in the next race so that it will be more fun” said J.Shen, laughing.

Newcomers Craig Liu and Benjamin Lee driving for JFly Absolute Racing in the Audi R8 LMS Cup was the last of the finishers while Asai Akihiro and Billy Fung was unable to finish the race.

The GT Asia Series continues tomorrow with Round 8 scheduled on Sunday, 15th September at 1.50pm.

The GT Asia Series Rounds 5 – 10, held at Fuji, Sepang and Zhuhai will mark the start of the AAMC Macau GT Cup, where drivers will also collect points for the Macau GT Championship.

Pic Of The Day: Jasmine Tai !