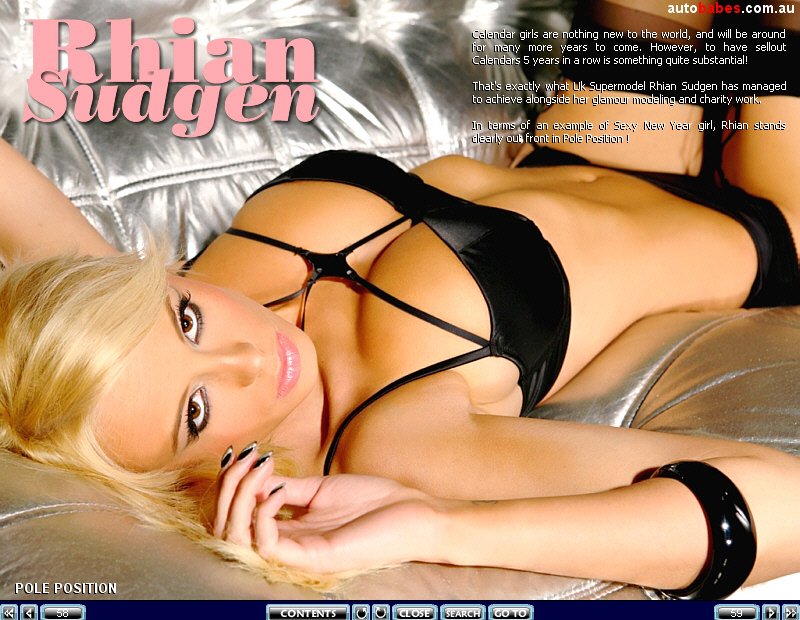 Calendar girls are nothing new to the world, and will be around for many more years to come. However, to have sellout Calendars 5 years in a row is something quite substantial!

That’s exactly what Uk Supermodel Rhian Sudgen has managed to achieve alongside her glamour modeling and charity work.

In terms of an example of Sexy New Year girl, Rhian stands clearly out front in Pole Position !

Rhian Sugden is one of the UKs top glamour girls.

Rhian has produced 5 years of best selling calendars and had countless appearances in men’s magazines across the globe. Being one of Britain’s top Page 3 girls for The Sun newspaper, she has become a popular face not only in publications, but as an international lingerie model, appeared in the hit film “Your Highness” along with James Franco, and was spotted on our screens in 2012 in Celebrity Big Brother.

Rhian entered the modelling world 5 years ago after being given the encouragement from friends to have some pictures done, due to being an “Ugly Duckling” at school.

Urged to get more confidence, and aren’t we glad she did, she got snapped up by a top London agency and was signed into contracts for Lads magazines and the biggest selling newspaper, The Sun.

After generating a huge fan base Rhian’s career has gone on to bigger and better things every year. Not only is she the face of underwear campaigns globally, and graces the pages of best selling magazines, she is also a brainy blonde, getting mainly A’s in her exams, which has led her on to be a talented writer, and currently writes for Loaded Magazine and Page3.com.

She has appeared in advertising campaigns for Lynx, Pot Noodle and Anne Summers and many more.

Rhian is also a keen supporter of charities and tirelessly works to promoted their causes. The list below are those she currently supports :

Rhian’s Page 3 and topless work is displayed in the gallery below also.

Jessa Hinton, a former Playboy Bunny at the Palms Playboy Club, also used to double as a hostess for Victory […]

It’s show time in the gamblers’ paradise Las Vegas: For the first time ever, Frank M. Rinderknecht, boss of the […]