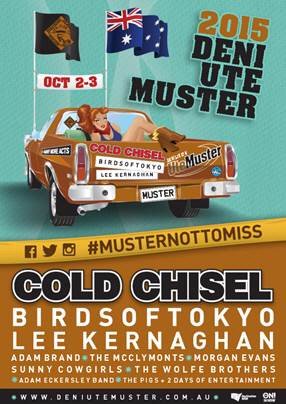 The 17th Deni Ute Muster saw heatwaves both on and off the stage over the past two days with temperatures over 30 degrees and massive sets from headliners Cold Chisel, Birds of Tokyo and Lee Kernaghan warming up Friday and Saturday nights and proving once again that Deni is the ultimate long weekend destination.

Friday night’s opening concert was a rock ‘n country heaven with The Pigs, The Wolfe Brothers, Morgan Evans, Birds of Tokyo and the legendary Cold Chisel closing the night with an almost two hour set of Australian classics including Khe Sanh, Bow River, When the War is Over and Flame Trees as well as songs from their new album, The Perfect Crime.

The little ones were also taken care of in Carnival Corner and the SunRice Family Centre with Bob the Builder making a special appearance across the weekend.

“We promise our patrons a “bucket list” experience and this year excelled on all fronts. The weather was spectacular as was the music and on ground entertainment” said Kate Pitt, Deni Ute Muster General Manager.

“We’d also like to acknowledge our Strategic Partner, Destination NSW, our Event Partners, Deniliquin Council and Conargo Shire Council and our major sponsors Holden, Bundaberg, Decentralised Demountables, IGA, XXXX Gold and Milwaukee Tools. It’s thanks to their continued support that we’re able to grow the event each year”.

Saturday night’s concert was pure country and headlined by Australia’s king of country music, Lee Kernaghan with Adam Brand, The McClymonts, Adam Eckersley Band and Sunny Cowgirls all keeping the 18,000+ crowd warm well into the night.

The Deni Ute Muster’s main arena was again filled with blue singlets and this year’s count was 3,959 and a new World Record! And what would a Ute Muster be without utes?! This year we had 5,988 utes on site, with the number of caravans, camper trailers and mobile homes exceeding 5,000 and for the first time, the Family Camping Zones were sold out months before the event.

The Muster also played host to two marriage proposals over the weekend – the first between Sheree and Pete from Seymour in Victoria, who took it to a whole new level with Pete proposing while in a helicopter hovering above the site and the words “Marry Me” spelled out in Utes on the ground below.