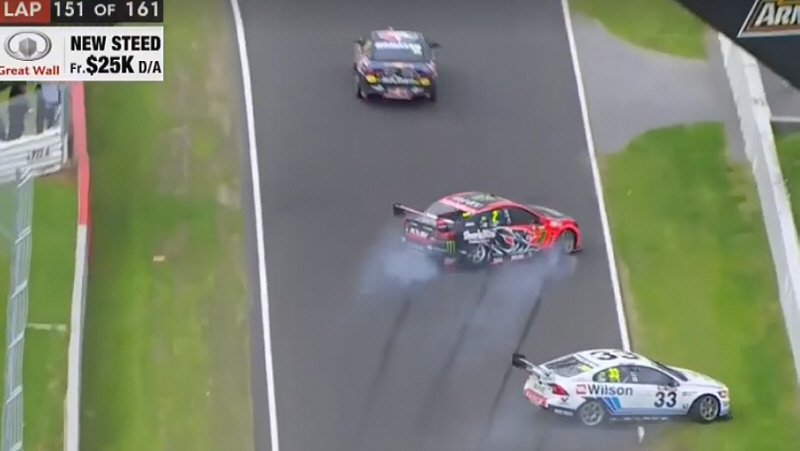 The incident on lap 151 of the Bathurst 1000 on Sunday 09/10/16 was a game changer for the Great Race. The `fortunes of race’ are just as un-predictable as the ‘fortunes of war’, however with the advantage of hindsight and video technology, it’s clear to see that all three drivers were caught up in the emotion of the race and under pressure to improve their position in the final 10 laps.

Jamie Whincup was following Scott McLaughlin with Garth Tander in hot pursuit having been passed by Whincup just a little earlier.

When Whincup saw what he determined was a gap on the inside of McLaughlin, he attempted to seize the opportunity!

Unfortunately however, you can clearly see the rear end of Whincup’s Holden lose traction as he enters the turn, meaning his approach was too fast at that point. The rear end slides causing Whincup to go wider than he expected and that of course shunted McLaughlin’s Volvo onto the green.

This was described by the Red Bull team as a Level 1 incident who say that Whincup was in the process of redress in order to correct the incident.

Tander on the other hand, continued to accelerate looking for an opportunity to overtake. No one knows what exactly was in Tander’s mind at that time besides Tander, but there did not appear to be opportunity in alignment with his continued speed as he approached Whincup.

Further, being at the rear, Tander was probably in the best position to see what was about to transpire and manage accordingly. He continued accelerating on his line however despite the fact that Whincup was still in his way, and attempted to overtake as McLaughlin was coming back in from the green.

When McLaughlin returned to track at full speed, his vision would have been limited making his re-entry more than reckless but mostly illegal. As he clipped Tander’s Holden, both drivers lost control and hit the wall on the right damaging both cars.

Whincup continued to finish the race, but was given a 15 second penalty that meant that although he finished first with a 6 second lead, his final number was 9 seconds behind that of Will Davison who won the race 0.14 seconds ahead of Holden’s Shane van Gisbergen in second position.

Reigning Bathurst champion Chaz Mostert has crashed out of practice during Bathurst 1000 qualifying with a fractured left femur. The V8 […]

Will Davison claims his second Bathurst 1000 at Mount Panorama

It’s called the Great Race for a reason, and everyone knows that Mount Panorama has it’s own spirit that keeps […]