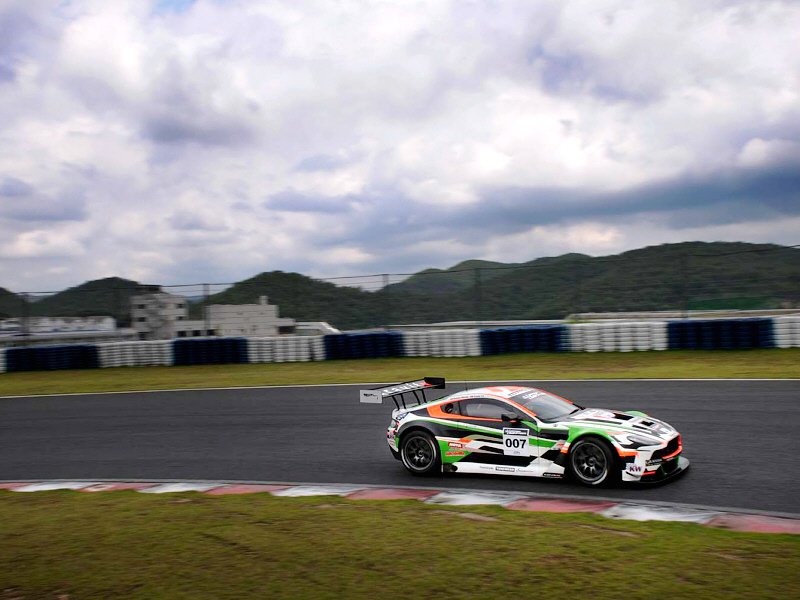 The Aston Martin V12 pairing Stefan Muecke and Frank Yu claimed their second win today during Round 3 of GT Asia Series, held at the tight and technical 3.7km Okayama International Circuit. The Craft Racing AMR duo maintained their advantage throughout the race despite a heavier weight as a result of a decision by the Organiser’s to add 30kg to the Balance of Performance, following their dominant form in Qualifying.

“It wasn’t an easy race for us, we had another 30kilos to the car before the start that made it harder for us. It’s getting a little unsafe for us especially on the brakes. I know I have to push in the beginning when the brakes are still cold and the tyres are new, so we tried to get a gap at the beginning.

Midway through the stint, Muecke indicated that the car was a little bit harder to drive, saying, “We had some problems with the rear and we started to oversteer a little bit and also we had to watch the brakes. Frank managed to maintain the speed and not to overdrive it and keep it on the track, which wasn’t easy and he really did a good job doing that. I am really proud of Frank”.

Yu said at the post race interview, “Luckily Stefan built quite a good gap before passing the car to me and as soon as I got into the car, I was given the instruction to drive to the gap between me and the car behind me. Like Stefan said, I was just nursing the car back and watching the gap. It wasn’t easy and I overshot, I think on the second last lap into turn 1 and almost went into the gravel. That was a big moment, but I held it together and we will see about tomorrow”.

As for tomorrow, Yu is starting in second, beside the McLaren of Mok. “I’ll try to follow the McLaren, Weng is starting the car and he is a very good driver and just try not to lose the gap too much. I want to give good tyres and brakes to Stefan so that he will have to do the pushing” ended Yu with a laugh.

Coming in second was the pairing of Hiroshi Hamaguchi and Mok Weng Sun in Team Clearwater Racing’s McLaren 12C GT3. Both were happy with the result and despite being paired for the first time, managed to get used to one another for a podium finish.

“First of all I am glad to be back here and I am proud to be on this team with Weng. I haven’t raced since last summer so its been a while, I couldn’t really get that feeling of racing back. Once the race started, Stefan was gone, so I just tried to follow the Audi’s and the Lamborghini.

“I struggled a little with tyres after the fifth lap, but I managed to follow those guys before handing the car to Weng” said Hamaguchi.

When asked who is his toughest competition, Hamaguchi replied “Weng is always my target and my competition but this time we are racing together and we have a lot of fun”.

“Hiroshi gave me too much work, I told him to pass everybody so that I don’t have to focus on overtaking but he left me quite a lot to do” said Mok with a laugh. “Seriously Hiroshi did a great job, he was running in the pack with all the top drivers. When I took the car we put on new tyres. We knew that the Aston was going to get a big gap and my job was to use the new tyres to try and close the gap to Frank. We had a little traffic issue but the gap was too big so by the time I cleared traffic and try to close in, the car was long gone.

“It was a tough afternoon, heat caused a little bit of a greasier condition than we hoped for and it wasn’t that easy to drive, I was struggling a bit with oversteer. Anyway, it’s great to be back racing and its my first time sharing a car, with my good friend so it was great” ended Mok. The Singaporean will start the race from pole tomorrow and is hoping for a wet race to be given a better chance at gaining ground on the Aston pair, but with the weather forecast being far from wet, this is more like wishful thinking.

Third place went to the Audi R8 LMS Ultra pairing of Alex Yoong and Francis Hideki Onda. The Audis benefitted from a modification to the Balance Of Performance and were able to fight among the frontrunners.

“The first lap was what I was worried about, unfortunately with the way the BOP is right now, we are very slow down the straight. I knew in the first lap I was very open to attacks from the others and I couldn’t quite get Charlz in turn one in the Lamborghini. Coming down in the first lap the McLaren went by me, so I knew I had to outbrake him into the hairpin and I managed to do that to keep third place.

“Then after that the Audi was very, very consistent. Our laptimes were not brilliant, but it was consistent and I could see that Charlz couldn’t do quite the same laptimes all the time so I was putting the pressure on him and I had one go down the inside, to look at overtaking but it was too risky, because we would have had contact and would have lost more time. So, at that point, I thought just follow Charlz home and give the car to Francis.

“In the end Francis did a great job and it’s our first podium, its good” ended Yoong with a smile.

Onda continued “Obviously Alex brought the car back in third position and its always been my policy to maintain what I am given, by sheer luck when the Lamborghini was penalised. I dropped down to fourth at one time I believe” said Onda before Yoong interjected positively saying, “It was not sheer luck, you would have had the Lambo”.

“Well actually, I was gaining on the Lambo and that gave me a lot of encouragement because I thought I must be doing the right thing. The racing today was probably the easiest drive I have had, the practice was more difficult as I was getting things wrong, so I really enjoyed it. But of course I was given a golden spoon by Alex, but I had to maintain its brilliance and I am happy to say that I was able to do that” continued Onda.

Li Zhi Cong finished the race in fourth after fighting his way up the grid from seventh. The Asia Racing Team driver was still getting used to his new 2013 Porsche 997 GT3 R and was still trying to find the most suitable set-up for the track, whilst getting used to the slightly different handling.

The second Audi pairing of Marchy Lee and Jeffrey Lee finished the race in fifth, the duo were struggling to keep a consistent race pace as the handling of the car deteriorated after pushing the McLaren at the start. Marchy said after the race “We were quicker than the McLaren at some corners but its such a small track that it’s difficult to pass. Because of the heat from the McLaren, it may have damaged our alignment set-up, so when Jeffrey was driving, it was really difficult to do a good job. Even for me, we were struggling to keep a consistent race pace because the car was just ‘nervous’ in the back and the braking was really bad. But we finished fifth and I have to congratulate my teammates, Alex and Francis for a good job”.

Behind them was Team Clearwater Racing’s Lamborghini LP560 driven by Ro Charlz and Tunku Hammam Sulong, who were forced to perform a drive through penalty as a result of speeding in the pit lane during their compulsory stop, dropping them down a place and allowing them to finish ahead of the third Audi driven by Franky Cheng Cong Fu and Philip Ma.

The GTM class was won by the Ferrari 458 Challenge duo of Tohjiro Azuma and Naoryu. The Age Age Racing pair were happy to repeat their Motegi win and kept their pace steady despite the pressure from their competitors.

“Although we had 8 seconds handicap for the pit-stop, everything went well, so we were able to win again. Thank you to Age Age Racing and the mechanics for a good car” said Azuma.

Naoryu then continued “Thanks to Tohjiro, we gained a great margin so I managed to concentrate on keeping the pace. I am very happy with the result and hope to win again tomorrow”.

Newcomer to the Series, Michael Green, driving in Direction Racing’s Porsche 997 GT3 Cup, was second, finishing ahead of Wayne Shen in the Porsche 997 Cup 3.8.

Green was happy with the race and saw a few points to improve upon for the next race. “It was a great race, I really enjoyed it, I like the longer distance but the pit-stop, I think we could have done a little bit better, so hopefully tomorrow we will make a better job of that. We lost quite a bit of time with that today.

“It’s great to be on the podium, but to be able to finish on the top step, I think we really need to pull something out of the hat”.

For W.Shen he was surprised to finish on the podium after struggling with the car throughout the weekend. “It was a very enjoyable race. I didn’t think I was going to be on the podium as I was having car trouble all weekend, during practice, setting the car up and some mechanical issues. So I am happy that I got the podium.

“Hopefully tomorrow we will be able to solve the issues and we will be at 100% and I’ll give it a good push and see if we can repeat today’s success”.

Keith Vong was on his way to claim his first podium upon his return to the Series when he was given a Stop-Go penalty for being under the stipulated time for the pit-stop. He cited his disappointment but saw that he had the pace to try for a podium at the next race tomorrow.

Hitotsuyama Racing pair, Asai Akihiro and Billy Fung, started the race on the GTM pole but Akihiro had an early incident on turn 5, and then on the third lap he spun causing him to drop to the end of the grid. Akihiro rejoined the race but only managed to gain a few places before having to hand over the car to Fung.

Fung said “after the race we took the car back to see why we spun a couple of times. We changed the set-up a little prior to the race and we also found that the tyre pressure was a little too high, which affected the grip of the car. We both found the car hard to control, especially with the warmer temperatures today”.

IMSS driver, Shim Ching drove consistently throughout the race in his Porsche 997 Cup 3.8, finishing ahead of Japanese driver Takeomi Mima of Ninne Racing.

When POP musicians Arianna and Pitbull came together to advertise Fiat, you knew the video was going to be sexy […]