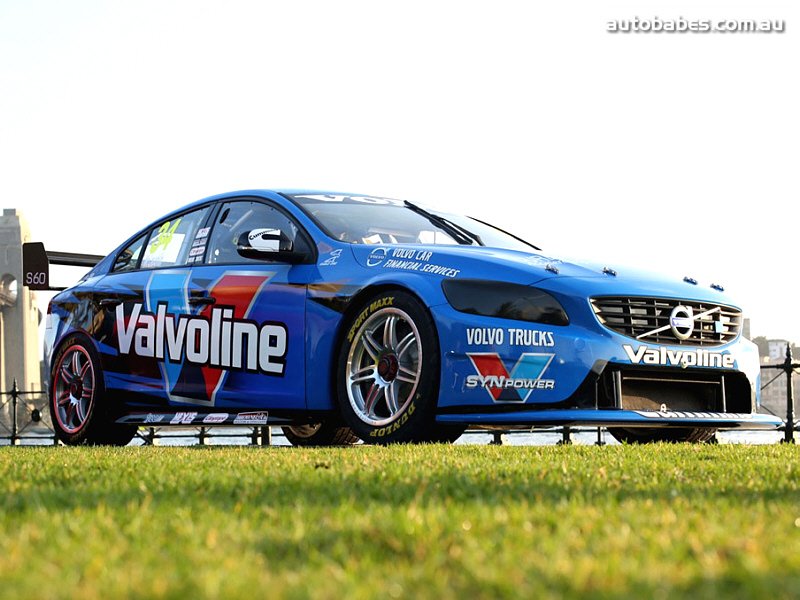 Volvo Car Group (Volvo Cars) announces it will have an official Volvo Polestar Racing team on the grid in the V8 Supercars Championship in 2014 and race the Volvo S60.

“I’m delighted to announce Volvos return to motorsport in Australia. Volvo has a rich motorsport heritage in this country, including winning Australia’s most famous race, the Bathurst 1000, 15 years ago this coming October. As the first luxury car brand to enter an official factory team in the V8 Supercars Championship, we’re determined to add to this heritage, while strengthening the presence of the S60 model line and the Volvo brand here in Australia,” said Matt Braid, Volvo Car Australia Managing Director.

The announcement is made a week after Volvo’s Swedish Volvo Polestar Racing outfit celebrated a championship record 1-2-3-4 win in the Scandinavian Touring Car Championship, where the team has been a long-term presence and has won many titles.

“We are extremely happy to expand our motorsport activities and offer a Volvo Polestar Racing team to fans in Australia and all over the world. The V8 Supercars championship is one of the – if not the – most competitive touring car championships in the world with fans across the globe. With the new Car of the Future regulations, it offers a perfect platform for our Volvo S60,” said Derek Crabb, Executive Motorsport Director of Volvo Car Group.

“We are very proud and excited to take on this new challenge and we will do our absolute best to utilize our 17 years of experience racing with Volvo, and add engineering and development strengths to the already competent team at Garry Rogers Motorsport,” said Polestar owner Christian Dahl.

V8 Supercars team Garry Rogers Motorsport – which this year celebrates its 50th consecutive racing season at the top level – will take on the responsibility to produce and race two V8 Supercars Volvo S60’s from 2014.

“The opportunity to align ourselves with Volvo and Polestar is first class. Most heartening of all, I am dealing with people who understand racing from an engineering perspective and the personal, day-to-day matters you need to have experienced to achieve success,” said Garry Rogers, founder and owner of Garry Rogers Motorsport.

Volvo has a rich heritage of motorsport in Australia, having won the 1986 Australian Touring Car Championship in 1986 with Robbie Francevic in a Volvo 240T. This year marks the 15th anniversary of Volvo winning Australia’s most famous race, the Bathurst 1000 in 1998 with Jim Richards and Rickard Rydell in a Volvo S40. Volvo is now set to start a new chapter in its racing history in Australia with the Volvo S60.

Volvo has unveiled the engine that will power its two Volvo Polestar Racing S60s in the 2014 V8 Supercars Championship.

“As the first luxury car manufacturer to field a factory team in the V8 Supercar Championship, we’re delighted to share this milestone moment with you and reveal our race engine for the 2014 V8 Supercar season,” said Matt Braid, Managing Director of Volvo Cars Australia.

“The race team at Polestar have worked hand-in-hand with the engineering team at Volvo Cars to design, build and develop a race engine in Gothenburg, Sweden, to compete in Australia’s premier motor racing category.”

The global resources of the Volvo Car Group and Polestar, Volvo’s performance and motorsport partner since 1996, are being fully utilised to facilitate the development of the Volvo Polestar Racing V8 Supercars in readiness for the 2014 season.

The Volvo B8444S 4.4-litre production V8 has been modified and built specifically for racing in the V8 Supercar Championship by Polestar – supported by the same people in Volvo Car Group who are behind the innovative four-cylinder Drive-E road car engines, which debut in Australia next year.

Thanks to its compact size and narrow 60 degree vee configuration, the B8444S is a truly unique engine on today’s racing grid. With this in mind, motorsport fans can expect to instantly recognise the Volvo Polestar Racing S60s in 2014 thanks to the engine’s distinctive soundtrack.

Christian Dahl, Managing Director of Polestar, said of the race engine: “We have completed a number of high-rev simulations and long-distance runs and we’re very happy with the figures and outcomes we’ve achieved. The next step is to fit the engine to the race car and continue the pre-season development timetable.”

Development of the race engine began back in May 2013. The first block was completed in late October and had its first run on the dyno in mid-November.

“So far, everything is absolutely on track with the race engine,” said Volvo Car Group Motorsport Technical Director Martin Persson.

“On paper, this race engine and the new Drive-E engines are quite different. But from an engineering perspective it is a very similar process, and that is to push your imagination and creativity to the limit within a specific set of targets.

“For instance, whether you are aiming for leading efficiency or the most powerful race engine ever to be heard in the Australian V8 Supercars Championship, you will strive to reduce weight, friction, heat and to maximise power.”

The Pepsi MAX Crew V8 Supercars Team go Back To the Future !

You’ve likely seen the posts all over social media proclaiming today as `Back To The Future Day!’ Well, this is […]

As the annual battle for the mountain approaches, which is the pinnacle race for the V8 Supercar series at Mount Panorama […]