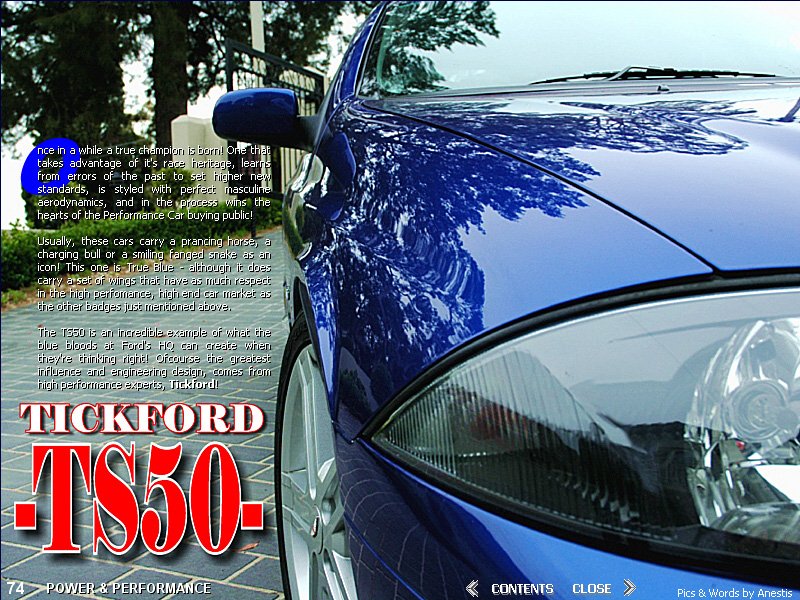 Republished from the original as featured in Edition 8, March 2006.

Once in a while a true champion is born! One that takes advantage of it’s race heritage, learns from errors of the past to set higher new standards, is styled with perfect masculine aerodynamics, and in the process wins the hearts of the Performance Car buying public!

Usually, these cars carry a prancing horse, a charging bull or perhaps a smiling fanged snake as an icon!

This one is True Blue – although it does carry a set of wings that have as much respect in the high performance, high end car market as the other badges just mentioned above.

The TS50 is an incredible example of what the blue bloods at Ford’s HQ can create when they’re thinking right! Ofcourse the greatest influence, workmanship and engineering design, comes from their in house high performance experts, Tickford!

Tickford’s heritage goes back to the late 1880’s when they were a coach building company. Their true claim to fame was that they were the engineering masters behind the Aston Martin series of sports cars a century or so later! The wings on the logo, remained as a reminder of that heritage.

Now, forming part of Ford’s FPV team (Ford Performance Vehicles), the company no longer exists as a seperate entity, and neither does the TS50.

Many view the TS50 Series III as the perfect evolution from the Falcon XY GT’s that dominated the Bathurst race track over 3 decades ago. The Windsor engine, which in many Falcons and is therefore respected by race fans, appears for the last time in a Falcon or a Ford for that matter. The Tremec 5 speed gearbox matched with the independent rear and the Koni shock absorbers are also perfect race gear.

Meaning no disrespect to the current range of GT’s, the TS50 is closer an evolution of the race champions for these reasons. Like the XY Falcons that dominated Bathurst, the TS50 is an example of brute force punching it’s way down a race track. However, the masculine yet effective body kit and styling offer perfect aerodynamics without being ‘wussy’ – and the huge rear wing actually WORKS! It produces the right amount of downforce in the right way!

There was a period after the GT’s that Ford failed in the performance stakes and this allowed Holden to take much of the market with a superior product.

To turn the tide, Ford fired up it’s Tickford engineers in the late 90’s to rectify the problem! By series 3, they’d certainly delivered that!

With sales increasing, it’s difficult to imagine why Ford would want to end it’s production, except to say that the bigger picture saw Tickford absorbed into what would become Ford Performance Vehicles (FPV). It’s understandable that if Tickford owned Fords performance range, then the GT, which always carried the blue oval badge would have to be sold out! A merger was inevitable! The TS50 Series 3 was the first Ford in a long time to challenge the Holden HSV’s. The TS50 is a better Grand Tourer (GT), has a superior chassis, is faster and is a more involving drive adding reassurance!

It looks and sounds great – even without a GT Badge!

The newest American Supercar, the Falcon F7 made its debut at the 2012 Detroit auto show. Since then, the start-up Supercar company has […]

Massive Smash at Winton for the Touring Car Masters