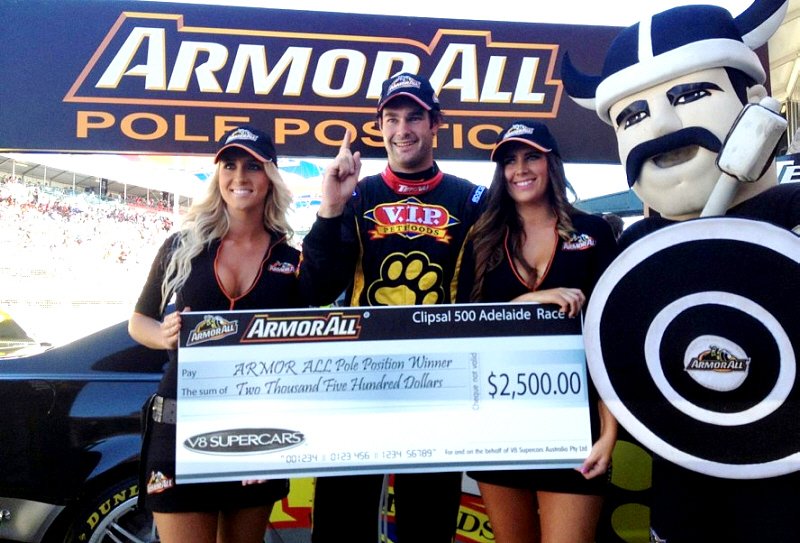 The season start to the `New Era’ of the V8 Supercars, has started in fine form for the series and in winning form for Team Red Bull Craig Lowndes and Team Tekno Autosports Shane Van Gisbergen !

Craig Lowndes had a great start to the season as he stands on top of the Championship series and of course Shane Van Gisbergen won the Clipsal 500 2013 opening round at Adelaide on Sunday.

Craig Lowndes also brought home a win on Saturday  for the first of the two Holden victories at the Adelaide Street Circuit.

Will Davison held up the Ford banner with a second place win on Saturday and a 6th place finish on the Sunday. A 20 second gap between him and Lowndes gave Lowndes that win and 12 seconds behind them was Jamie Whincup in 3rd on Saturday’s podium.

But the winner of the event, Van Gisbergen wasn’t without controversy. He had resigned suddenly from the Stone Brothers/Erebus Racing team at the end of 2012 and was a surprise entry with the Tekno Autosports Commodore.

His win was more certain though having led 51 of the 78 Sunday laps, and marks the first non-FPR or Triple Eight victory since November 2011.

As expected, the opening round highlighted some teething problems for the new entries of Nissan and Mercedes.

In the Nissan camp, Todd Kelly was black flagged on Saturday after an oil surge produced a thick smokescreen from his Altima, while teammate Michael Caruso also lost time with power steering issues.

Other issues in general with all cars included the new control transaxle, extreme footwell temperatures and wheel nuts that became stuck following even minor wall contact.

At this stage, the Nissan and Mercedes entries could not match the pace of the more seasoned Ford and Holden teams. Ofcourse that is expected to improve as the cars evolve more.

Supercars.com today unveiled images of Ford’s new Mustang Supercar. The new V8 Supercar was broken in on the Queensland track […]

– Company Press Release Holden has gone back to the future, restoring its very first concept car – the 1969 […]