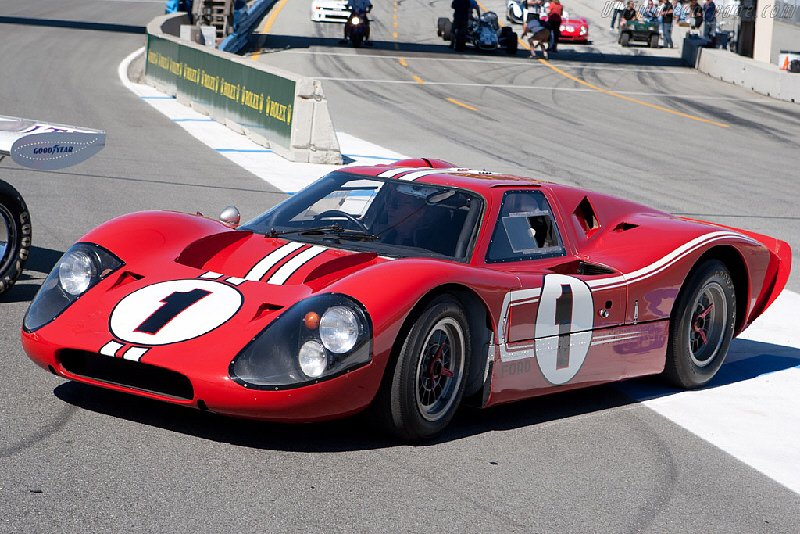 Not convinced that the British built Ford GT(40) with its steel monocoque and small-block V8 was a potential Le Mans winner, Ford USA took a more active role in the project early in 1965. The first step was that Carroll Shelby was put in charge of campaigning and further developing the existing car. He fitted a larger version of the small block engine, new cast alloy wheels and better brakes. There was instant success as the improved GT40 won the Daytona 2000 km and its class at the Sebring 12 Hours. For Le Mans Shelby went a step further and equipped two cars with the Ford Galaxy derived big block V8. These GT40 Mark IIs were quick, but fragile and Le Mans proved to be a disaster once more for Ford.

While Shelby continued to develop the big block engined GT40 Mk II, Ford had even bigger plans. They had realised that Eric Broadley was partly right at the start of the GT40 project when he objected to using steel for the car’s monocoque. Being much friendlier to use than lighter materials like aluminium, it allowed for the GT40 to be easily turned into a production car. The additional weight did hamper the cars to the extent that they had to resort to engines almost twice the size of the biggest competitor, Ferrari. Needless to say the additional power and weight also stressed all the running gear further, causing many retirements for the Mk II in its maiden season. The only logical solution was to build a heavily revised version of the chassis.

In the fall of 1965, Ford set out to build that new chassis. The obvious choice would be to replace the steel with aluminium for a considerably lighter monocoque. It was feared, however, that the lightweight metal would not be strong enough to cope with the 500 bhp engine and the strains of racing around Le Mans for 24 Hours. The engineers decided to use a honeycomb structure sandwiched between the sheets of aluminium, resulting in an exceptionally strong material. These honeycombs were already commonly used in aircraft design, but it was a ground-breaking construction method in motor racing. The production of the tubs was out-sourced to Brunswick Aerospace.

By using a similar design for the chassis, many of the Mk II mechanicals could be carried over to the new car. These included the suspension parts, brakes and the big block, seven litre V8 engine. New was the Kar Kraft constructed 2-speed automatic gearbox, replacing the more common four speed manual box. Assembled by Ford in Dearborn, the GT40 evolution was clothed in a tightly wrapped fiberglass body with a high rear deck and an aggressively cut-off ‘Kamm’ tail. Considered an experimental car, the new racer was simply known as the ‘J-car’, referring to the Appendix J of the regulations to which the car was constructed. Weighing in at 940 kg, or 200 kg lighter than the Mk II, the first J-car was ready in time for the Le Mans Trials in the spring of 1966.

Before being shipped to France, the highly advanced racing car was shaken down at Riverside. At the annual Le Mans test day, the driving duties were handed to Bruce McLaren and Chris Amon. Within a few laps, Amon was on the pace and just shy of Phil Hill’s 1965 pole time. At the end of the day, the J-car had clocked the quickest time of the trial. It was nevertheless not entered in the race as Ford could not afford a new car debacle for the third year in a row. Coincidentally McLaren and Amon scored that elusive Le Mans win that year in the now well sorted GT40 Mk II, followed by two other Mk IIs. Despite the success of the Mk II, Ford continued the J-car development and a second car was constructed in the summer for further testing.

After the Le Mans trial the first J-car was returned to the United States and served mainly as a mule for testing different body configurations, mainly to improve high speed stability. The second J was completed in August and prepared to race in the new Can-Am Challenge, which would start in September. During a test at Riverside, Ken Miles was killed in a freak accident, the cause of which is still not clear. Immediately after the accident, the construction of a third car was suspended and the first one was destroyed in a crash-test to help determine the cause of the fatal accident. Late in October the third car was finally assembled with a conventional gearbox replacing the automatic.

Ferrari’s announcement of the 330 P4 had gotten the Ford people worried and to make sure the J-car was ready, Shelby was asked to help develop the car. In January of 1967 ‘J-3’ was extensively tested and as many as twenty-five body configurations in five days were tried. Finally a design was found that best combined low-drag with high-speed stability. A fourth car was built, equipped with the new body and sent to Sebring for the J-car’s belated competition debut. Referring to its GT40 lineage, the J-car became the Ford GT Mk IV, or just Mk IV. In the hands of Bruce McLaren and Mario Andretti, the bright yellow livered Mk IV set pole position with a 2.6 second margin and was driven a debut victory.

A week later, McLaren was at Le Mans to test J-3 in the official Trials. Fitted with all sorts of testing equipment, it failed to record a quick time, but was clocked at 330 km/h down the Mulsanne straight. To leave nothing to chance, four completely new chassis were constructed for Le Mans. Two (J-5 and J-6) were handed to Shelby American for McLaren/Donohue and Gurney/Foyt, and two (J-7 and J-8) were entered by Holman & Moody for Andretti/Bianchi and Ruby/Hulme. The four Mk IVs were backed up by another three factory/Shelby prepared GT40 Mk IIs. They faced seven state of the art Ferraris and fellow Americans Chaparral, who brought two Chevrolet engined 2Fs with their advanced movable wing.

The qualification sessions were dominated by the Americans with McLaren clinching pole position ahead of the Chaparral of Mike Spence and Phill Hill. The fastest Ferrari was seventh and over four seconds slower than the Mk IV. In the race Ferrari’s rock-solid reliability saw them gradually rise up the leader board as one by one the Fords and Chaparrals lost time in the pits or were forced to retire. Hulme had set numerous fastest laps, but his Mk IV was sidelined after Ruby damaged the sump during an off-track excursion. Andretti crashed out in the middle of the night and the McLaren/Donohue car lost time in the pit after the rear body had blown off down the Mulsanne and could do no better than fourth. Fortunately the Gurney/Foyt car had a trouble free race, finishing five laps ahead of the best Ferrari to secure the first Le Mans for an all American car.

One day after Ford’s second Le Mans win, new regulations for 1968 were announced, which rendered the Mk IV obsolete. Ford brought the Mk IVs back to Holman & Moody and had all four rebuilt to resemble the winning chassis, which according to the ACO was J-6. The cars were painted red and received a ‘Gurney-bubble’ in the roof to be an exact replica of the winner. For a while these ‘winners’ were shown at various motorshows. At the end of the year, J-6 was handed to Foyt for his fine debut and winning Le Mans drive. Two additional honeycomb chassis were constructed and used with little success in Can-Am under the G7A moniker, bringing the total of ‘J-cars’ constructed to ten.

Ford also sold J-7 and J-8, but held onto J-5, which at the time did not have a chassis plate and missed many of the original components like the engine. In 1991 American collector James Glickenhaus bought J-6 and soon after he started to have his doubts about whether his car really was the Le Mans winner. He visited the Ford Museum to inspect J-5 and discovered that it had a lowered floor under the driver’s seat. Together with the bubble in roof this was done to accommodate the very tall Dan Gurney. There was also a crack on J-5’s nose where a fan with a bottle of champagne had sat down after the race. Furthermore, Glickenhaus found some damage on his car that was caused when the tail blew off. For almost thirty years the ACO and Ford’s marketing department had all the historians fooled. To date Glickenhaus is the only person to prove that his Le Mans winning machine, really wasn’t.

At first glance the Mk IV could easily be mistaken for being ‘just’ the fourth evolution of the original Ford GT40. Closer inspection and contrary to the popular opinion about American cars reveals that it is in fact a highly advanced racing car. Particularly with the chassis construction, Ford broke new ground and they were quickly followed by all other racing car manufacturers and to this date the honeycomb construction is still used to create strong, lightweight components. It is unfortunate that the regulations cut the life of the Mk IV short, although many believed that Ford would have left racing to privateers at the end of the season anyways. To this day, the Ford Mk IV remains as the only completely American car to have won the great endurance racing classic.

– Skynews.com.au Google is joining with car makers General Motors, Audi, Honda and Hyundai in a new US partnership to […]