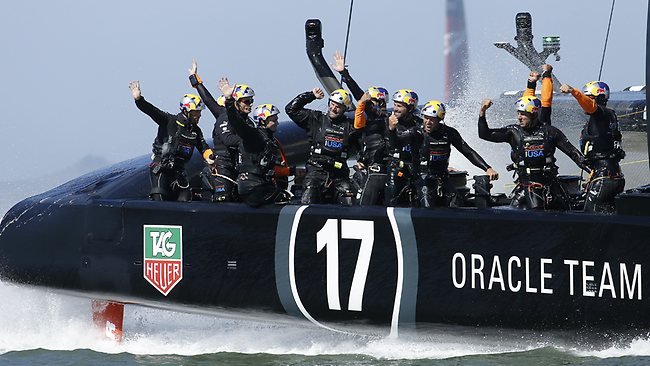 The US syndicate won race 19 by 44 seconds to beat challengers Team New Zealand 9-8, capping a remarkable final series which they trailed 8-1 a week ago.

Oracle’s crew celebrated wildly as they crossed the line and they were joined soon afterwards by team owner Larry Ellison, the software billionaire who bankrolled their campaign.

Improved crew work and substantial upgrades to their AC72 catamaran were the key to a monumental turnaround after they were outclassed in the first week of the final.

The Team NZ sailors were a picture of dejection, with their boat again unable to match the speed of the winners.

Team NZ were leading at the first mark after coming off the favoured end of the start line.

They were still narrowly ahead after the second leg downwind but it was the third leg, upwind, which again proved decisive.

Oracle’s superior speed simply carried them past the Kiwi boat in the early part of the leg and the Kiwis could do nothing from that point, finding themselves further behind every time they crossed.

The fourth and fifth legs were a procession for Oracle, who defend the Auld Mug for the first time since winning it from Swiss syndicate Alinghi in 2010.

‘To come from behind, the guys just showed so much heart,’ Spithill said.

‘It really is about the team. On your own, you’re nothing but, when you’ve got a team like this around you, they can make you look great.’

Spithill says it is appropriate Oracle came from behind to win the decider, saying it summed up the fighting attitude of the team.

‘We wouldn’t have had it any other way.

‘To be facing the barrel of the gun at 8-1, what did these guys do? They didn’t even flinch.’

The result is a cruel one for Team NZ, whose campaign was supported by $NZ36 million ($A32 million) of public money.

They had the Cup in their grasp when they were less than four minutes from the finish line in race 13 on Saturday. However, the race was abandoned when the maximum race time limit of 40min was reached, leaving the score at 8-2.

It is the second unsuccessful challenge for Team NZ since they lost the cup to Alinghi in 2003.

They challenged the Swiss for the prize unsuccessfully at Valencia in 2007, losing 5-2

– Press Release   Kimi Räikkönen: “Spa is the greatest racing circuit in the world” After a strong second position […]

– Skynews.com.au Google is joining with car makers General Motors, Audi, Honda and Hyundai in a new US partnership to […]