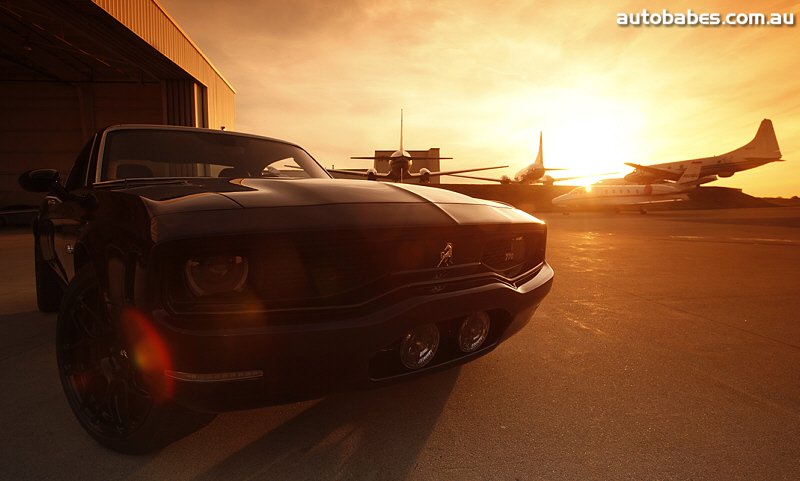 The official Equus website reads, in big bold print ; BORN IN THE USA!

And then goes on to trumpet ;

Most websites on the internet who report the new release of this car seem to be abuzz with excitement.

Yes, we love big powerful muscle cars, and there’s no denying that the American’s do it best – a granted no brainer since Detroit is where the muscle car movement first originated.

And Yes, there is no disputing the muscle car credentials of the mid to late 60’s Ford Mustang and the powerhouse drive train of the current Chev Corvette, with that big huge 6.2L motor !!

But I’m sorry, I don’t find myself getting excited over this vehicle! And as much as I try to find inspiration in the power and glory of the union of two of the best muscle cars in the USA, I can’t get excited over something that claims to be the `New Frontier’ when all it is in reality, is simply a derivative of the same 1968 Mustang and the Chev Corvette in what must be seen by many as a reluctant marriage !!

Although a very common powerhouse drivetrain in the USA and especially in Australia, is a Chev motor up front, a Ford 9″ diff at the back and in the old days a Ford Top Loader gear box in the middle, and even though my own 1974 Corvette custom has the top end of it’s 350ci engine rebuilt to the same roller rocker spec found in my 2002 Tickford TS50, the truth is that enough integrity still exists in these and most customs to still wear a Ford, Chev of other badge! And to proudly be called, a custom!

What we see here, is an aluminium copy of the ’68 Mustang body placed on top of a current 2014 C7 Corvette rolling chassis – including the 6.2L engine and drive-train!

Is that really the new frontier !? Where’s the innovation and engineering breakthrough!?

Sounds a lot like the current frontier to me !!

And no where on the Equus site does it mention where the inspiration comes from or what the donor body and chassis actually is. Do they really expect that we won’t recognize the Mustang because the stallion badge has been replaced with a horse looking over it’s shoulder ?

The day when someone can purchase a body from a spare parts distributor, then place it on top of an existing performance chassis, change badges, slightly re-tune the engine and call it a new car and a new frontier, is the day the automotive industry has lost it’s credibility! And further, any automotive website, magazine or enthusiast who embraces a car like this as a new frontier, has lost more than just credibility.

How would you feel if a musician mixed an existing lead melody with an existing rhythm and called that the new frontier of music ?

The car is simply a Mustang, and the word Equus is Latin for horse. We’re not sure about the reference to BASS which is a fish (unless they misspelled BOSS from the 302 Mustang), and the numbers 770 seem to have no relevance either. So is it a `Horse Fish’ or as my 16 yr old daughter suggested, a `Sea Horse’ ?

Worst of all, the asking price for this car is USD$250,000 !! Why would anyone with even average intelligence spend that money on this car, when the same or less will get you one of the best 2014 Mustang SuperSnake’s in that category! Or just over a quarter of that price will get you the latest 2014 Chevrolet Corvette C7 !!

Now those are NEW cars!

As was the Mustang in ’68 and in most of it’s forms through the years, this car looks incredible – of course – with the same sleek lines, fast back and coupe body style as that original Mustang. We’ll ignore the ill designed front grill which doesn’t allow air flow for cooling the radiator at high speeds.

So what I really see in the gallery below, is the timeless shape of the Ford Mustang, and what I read in the specs, is the incredible power potential of the modern Corvette 6.2L engine.

Oh, and just in case the car itself wasn’t nonsensical enough, the promo video is even more so.

– Source: http://harleyinsider.com   From our friends at HarleyInsider.com comes this video of Sports Illustrated’s Swimsuit Model Marisa Miller in a […]

– Press Release The Corvette C7.R is the closest link in modern times between Corvettes built for racing and those […]

Flashback Pic of the Day; Sandra Lee for Edition 37 – The Swimsuit Style Edition