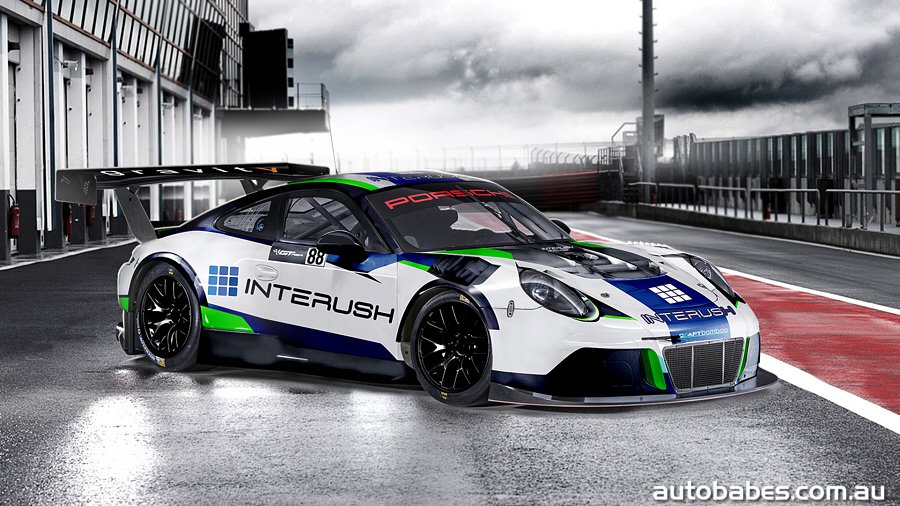 Craft-Bamboo Racing is set to take on Asia’s best GT teams and drivers once again in the 2016 GT Asia series. The team is proud to announce that GT-ace, Richard Lyons, will retain his seat alongside seasoned GT Asia driver, Frank Yu, where they will pilot the brand new #88 Porsche 911 GT3 R. This will be one of two Porsche’s entered by the team and will debut a stunning new livery courtesy of long term partner and title sponsor, INTERUSH.

Richard Lyons is no stranger to the GT Asia competition, having driven with Craft-Bamboo Racing in 2014, before completing a full GT Asia season with, Frank Yu, in 2015. Lyons was quick to demonstrate his incredible pace on the circuit last year and managed to score two pole positions throughout the competition. It is Lyons pace and championship winning ability that he brings with him to Craft-Bamboo Racing and he will be combining this and his experience with Frank to extract the greatest performance from the #88 INTERUSH Porsche 911 GT3 R.

Hong Kong’s, Frank Yu, has been a constant force in the GT Asia series and helped the #88 entry to two podiums in 2015. While their pace was undeniable last season, the pair suffered numerous setbacks. This has only motivated the pair to launch an aggressive championship assault to rewrite the last season and take the #88 Porsche to the top step of the podium. Frank’s vast amount of experience behind the wheel and great knowledge of each of the Asian circuits helps to give the INTERUSH Porsche the edge over the GT Asia competition.

The #88 911 GT3 R will also debut a new livery that aims to create a strong impact with a modern and aesthetic design. Featuring sharp angles of INTERUSH colour, overlaid on a white backdrop, the new livery is the perfect way to represent the partnership between Craft-Bamboo Racing and Porsche Motorsport. Evoking a clean style, the angular design will be unmissable on the race track, promoting INTERUSH to fans and viewers around the world.

Lyons and Yu have a history of success that includes multiple podiums and pole positions, which they will be looking to build upon in 2016. With their experience together in the past and the support of INTERUSH and Craft-Bamboo Racing, the #88 entry will be a formidable contender for this year’s championship title.

The 2016 season will mark the beginning of a new chapter in the partnership between Craft-Bamboo Racing and INTERUSH, who have been linked since 2012. They have supported the team’s World Touring Car, World Endurance Championship and GT Asia campaigns to great success and their continued partnership signals strong confidence in Craft-Bamboo Racing’s ability to attain the success necessary to win championships.

“I’m delighted to once again join forces with the superb Craft-Bamboo Racing team and to have INTERUSH supporting us again. This year will be even more exciting with the team changing cars to the new Porsche 911 GT3 R. We have a lot to learn but I know Frank Yu and I will be more than up for this challenge. INTERUSH’s support over the last season was fantastic and we hope to bring them many more podiums in this season’s campaign. Now the first race can’t come soon enough as the winter season always feels too long.”

“I am really looking forward to partnering up with, Richard Lyons, for another year in a bid to challenge for the championship title. It is going to be a big change with the new Porsche but I am confident that we will be able to get back on the podium very quickly with our combined GT Asia experience and the new car’s abilities. I really can’t wait to get back out there and finally put ourselves and the new car up against the competition. I am also really proud to be backed by INTERUSH again this year and our aim is to go out there and reward all their support with some victories.”

“The new 911 GT3 R is the most amazing-looking Porsche I have ever seen. However it is all the technological advancements for 2016 which will make this such a great competitor and bring positive media and consumer attention to the Interush brand throughout Asia.”

“It is fantastic to have, Richard Lyons, with us for another season; his incredible pace and experience is just what the team needs to be able to fight for the championship title. His pairing alongside, Frank Yu, is yet another positive as they have proved how successful they are as teammates in the past. Frank brings with him incredible knowledge and experience as a long time GT Asia competitor and together they will be fighting to claim the drivers’ title this year. Having INTERUSH back on board as title sponsor is a huge benefit as their support is integral to helping achieve the best results on the race track. I am looking forward to seeing Richard and Frank up on the podium and celebrating victory for the #88 INTERUSH Porsche 911 GT3 R when the season gets underway in May.”

Craft-Bamboo Racing is proud to announce a new, long-term partnership with legendary German marque, Mercedes-AMG from 2019. The Hong Kong […]