Scott McLaughlin has put the 2020 Supercars Championship title beyond doubt with a second-place finish behind Cameron Waters in the OTR SuperSprint finale.

The Shell V-Power Racing driver started from pole and, with a 299-point lead, only needed to finish ahead of rival Jamie Whincup to secure the crown with a round remaining.

Fellow front-row starter Waters beat McLaughlin to Turn 1, sweeping around the outside while Whincup held third.

The trio ran nose-to-tail during the opening laps, before Whincup pitted on lap eight. Waters and McLaughlin stopped a lap later, filing back on track ahead of the Red Bull Holden.

That’s the way they remained for the duration – Waters taking the flag 3.3586s clear of McLaughlin, who now heads to Bathurst without the pressure of a title fight.

Only a complete disaster at Bathurst – including a points penalty – could possibly deny McLaughlin the crown.

“It’s awesome, credit to everyone at Shell V-Power Racing. It feels weird not being able to celebrate with the fans like normal,” McLaughlin said.

“I got the main one now, we can fully focus on Bathurst and have a massive crack at it.

“It’s been an awesome battle with Jamie throughout the whole year and for Cam to get his first win of the year, congrats to him.

“At the start I was trying to be safe but wanted to get the lead. He did a great job and I’m stoked.”

For Waters, the result marked his first win in a single-driver Supercars race, following victory in the 2017 Sandown 500 alongside co-driver Richie Stanaway.

“The car was awesome, we made it a little better between the two races, got a good start and I was away,” Waters said.

“The boys did a mega job in the pitstop and to reward all the hard work they’ve put in is just awesome.

“I’m absolutely pumped and just excited to blow the rears off it. I was nursing them for the whole race, I just wanted to get rid of them!”

“A big congrats to Scotty and his team for an amazing year,” he said.

“I’m pretty proud of what everyone’s done this year, I’m looking forward to just going to Bathurst now, all gloves off, just trying to see who can get to the finish line first.”

Shane van Gisbergen was the big mover having turned 22nd on the grid into fifth – the Kiwi taking six of those places on the first lap alone.

The last came on the final lap thanks to a mistake from Chaz Mostert at Turn 6.

Mostert had lost places to Fabian Coulthard and Percat early, before running long and fighting back on a fresher tyre in the second half.

The Boost Mobile Mustang had run on the tail of Whincup, but lost time with an apparent airbox fire on pit exit and a later off-track excursion while trying to pass Coulthard at Turn 5.

The 2020 Virgin Australia Supercars Championship will conclude with the Supercheap Auto Bathurst 1000 on October 15-18. 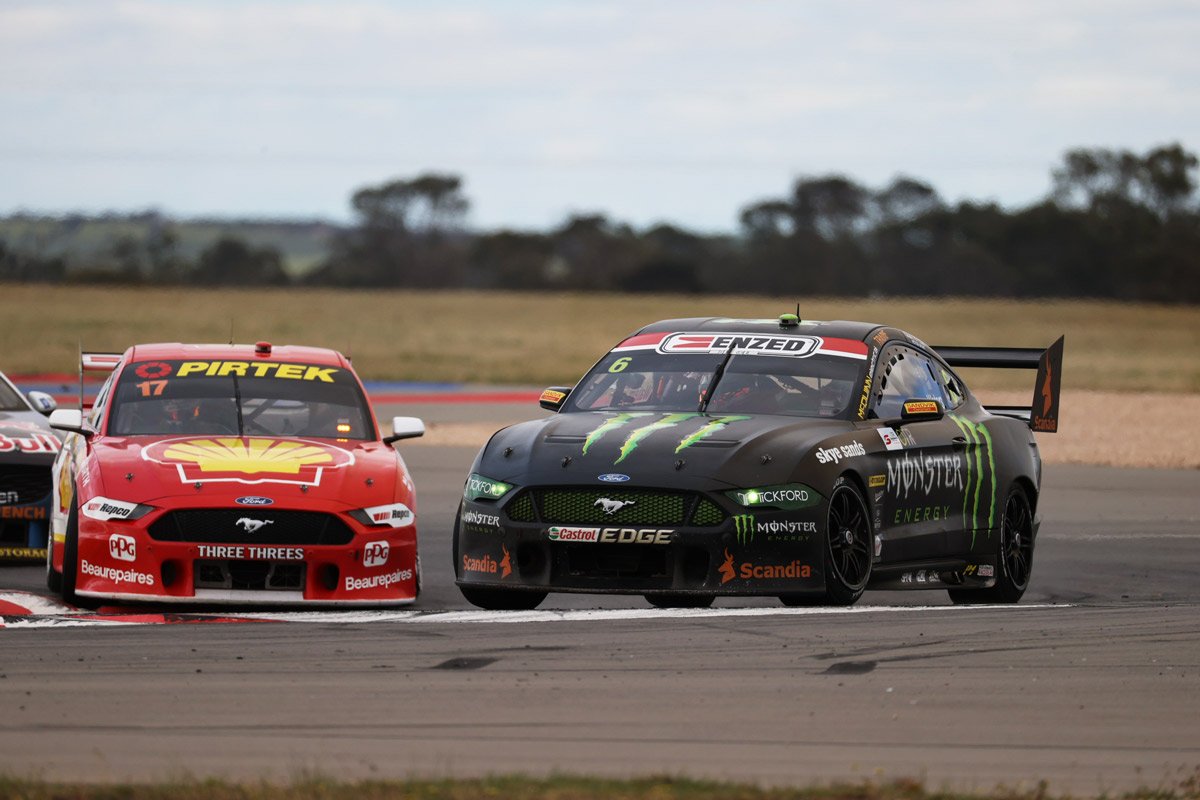 Mark Winterbottom has claimed his first V8 Supercars championship at the season-ending Sydney 500 for the Ford Pepsi Max team. […]

She made history by being the first female driver to enter the V8 Supercars series fulltime. And it’s probably true […]