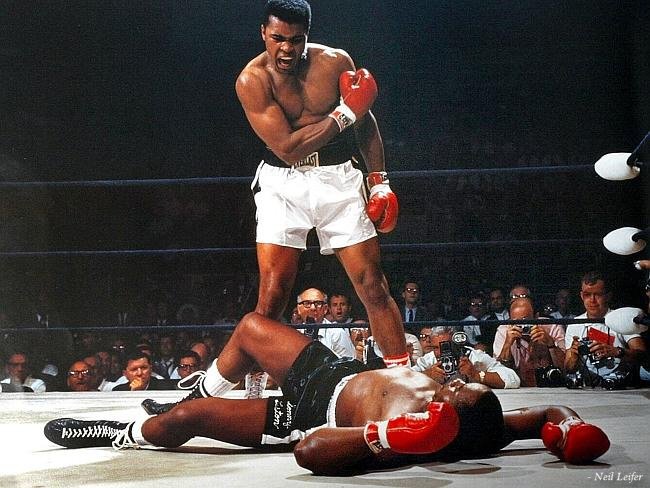 Muhammad Ali may have passed away, however the legend remains; of a magnificent world heavyweight champion, with dancing feat, fast fists, and a faster personality that could not be suppressed!

The indeed magnificent Muhammad Ali, the `greatest boxer that ever lived’, transcended the sport of boxing and conquered the world to influence areas of entertainment, politics and the human rights movements of the United States and the world.

In the ring, the legend was un-disputed! The photo above, taken by Neil Leifer at the 1965 re-match of Cassius Clay (Muhammad had not yet changed his name) and Sonny Liston shows a young Cassius validating his claim as the Greatest Boxer of All Time that he was to become. The photo also went on to become the greatest photo in sports history and the fight itself named by Sports Illustrated Magazine as the fourth greatest sports moment in the 20th Century ! The fight on 25th May, 1965 was a rematch to the 1964 prequel that saw Liston give up in the seventh round after being dominated in the first six. In the re-match, Muhammad proved he deserved the win by knocking out Liston in the first minute of the first round.

It should be noted by the way, that Sonny Liston was a dominating boxer with an intimidating personality, a criminal record and ties to the mob! So he was no slouch in the ring either making Ali’s win all the more credible to claims of being the Greatest and catapulting him onto the world stage in order to prove it!

Diagnosed with Parkinson’s Disease in the mid 80’s, just a few years after entering retirement, Muhammad’s presence and personality remained as strong as ever in characteristic defiance of the visible physical struggle.

In fact, despite suffering from Parkinson’s Disease, Ali surprised the world by carrying and lighting the flame at the Opening Ceremony of the 1996 Olympics. This remains a widely remembered and very poignant highlight of that opening and testament to the courage and strength of Ali.

Through the early years, Ali was perhaps seen as a fast talking, brash boxer who had `it coming’ ! As the years went on though, and the more he proved himself in the ring, the more he carried the same moral beliefs and integrity to his life outside the ring, the more he became loved and accepted. To the entire world, Muhammad Ali stood as a hero, to the Muslim world of that time, Ali was both hero and messenger, and to the young of the United States, regardless of color, Ali stood as a man of great moral principle who was willing to go to prison for his beliefs.

Being no stranger to controversy, Ali refused to participate in the Vietnam War when he was called to do so and rebelled against his conscription. He was by no means a `draft dodger’ though because he was willing to go through the legal system and face prison time that would potentially end his boxing career.

The legal system found him guilty, and sentenced Ali to prison, but under appeal to the federal court of appeals in the state of New York, the case was thrown out although it wasn’t until 3 years later that the Supreme court intervened and fully overturned the decision. During this time, Ali did lose three years of Big-Money-Bouts although he didn’t run away from the country or the situation by moving to another country to continue his fights. He chose to stay in the USA where he was always willing to stand by his principles.

This principle was held stead-fast through Ali’s life in many examples of his human rights activism, especially in partnership with Malcolm X. It’s been said in fact, that along with associations with Martin Luther King as well as Malcolm X, Muhammad Ali paved the way for equal rights in America that directly attributed to Barrack Obama becoming president.

Many years later in life though, during the illness years, the best example of this stead-fast staying mind power and belief in principle was demonstrated again.

As Dick Ebersol (American TV executive and senior adviser for NBC Universal Sports & Olympics) told Sports Business Journal in 2015, there was a technical problem with the rocket that Ali was meant to light at the 1996 Olympics.

“It had been overloaded, leaving no room for oxygen, so no combustion can take place”, said Ebersol

“Ali may have known this intuitively,” he continues. “But he didn’t know it intellectually. He keeps holding the thing there, hoping that it will get lit. You can see flames licking back against his forearms. He didn’t exhibit any pain, but I kept waiting for him to drop his torch because it just looked like it was impossible with the flames licking back the way they were.”

In the end, enough propellant burned off to get the rocket going.

“When Ali appeared, it was the greatest collective gasp any of us had ever heard,” Ebersol said. “I never told the announcers Bob Costas and Dick Enberg that it was going to be Ali. What came out of them was sheer awe.”

Now to the present, adding to the fight against Parkinson’s, Ali also struggled with a Urinary illness and Pneumonia. When he was admitted to hospital a few days ago with respiratory problems, and although the world news reported that he was in `fair condition’, the Ali family knew it would be a short stay. Muhammad Ali passed away Friday night 3rd June, USA time.

Ali’s daughter Hana Ali, told reporters that his heart kept beating for a further 30 minutes after his organs had failed which she said was a “true testament to his strength of spirit and will!”

It was a final demonstration of that staying-power and belief in principles that we note here.

Below is a poem Ali wrote for an interview with Playboy in 1974;

The legend of Muhammad Ali is already written,
’cause I wrote it–and you better listen to it:

This is the legend of Muhammad Ali,
the greatest fighter that ever will be.

He talks a great deal and brags, indeed,
of a powerful punch and blinding speed.

The fistic world was dull and weary;
With a champ like Foreman, things had to be dreary.

This brash fighter was something to see
And the heavyweight championship was his destiny.

Ali fights great, he’s got speed and endurance;
If you sign to fight him, increase your insurance.

Ali’s got a left, Ali’s got a right;
If he hits you once, you’re asleep for the night.

As you lie on the floor while the ref counts ten,
You better hope and pray you don’t meet me again.

For I am the man this poem is about;
Now I’m the true champ of the world, there ins’t a doubt.

Once I predicted and I knew the score,
I told the chumps I’d be the champ of the world in ’64.

When I say three, man, they go in the third.
Don’t bet against me, I’m a man of my word.

Do you remember when I predicted Sonny Liston’s dismemberment?
I hit him so hard he forgot where October and November went.

Ali’s funeral will be held in his hometown of Louisville, Kentucky on Wednesday 8th June.

Horn vs Tszyu: Is this Boxing’s State of Origin ?

It’s certainly being billed as one of Australia’s premium bouts! And rightly so; in one corner is Jeff Horn who […]

It was a night of incredible fights, that started with the `Fight of the Decade’ between first undercard of Foley […]

Anthony Mundine vs Michael Zerafa: Mundine KnockedOut in the First Round!

Underwhelming! That’s the word that comes to mind to describe the farce that has become the Mundine media machine over […]