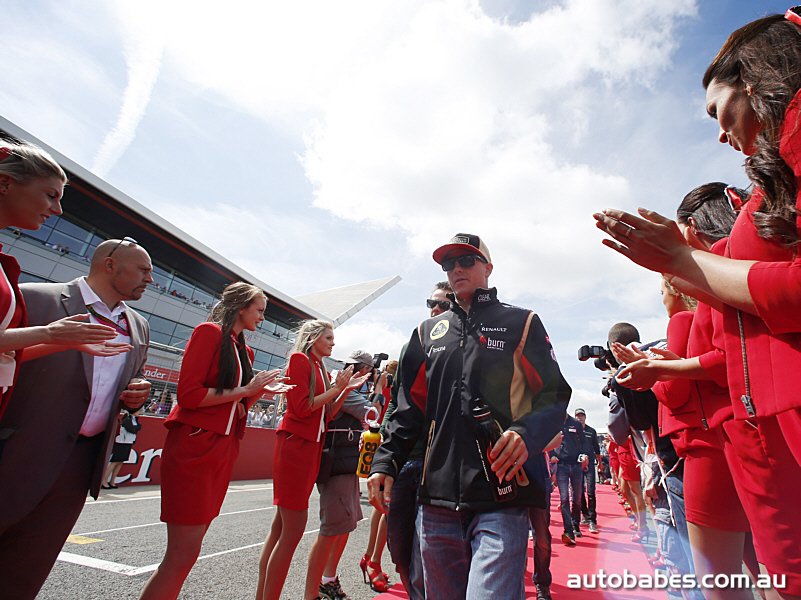 Kimi Räikkönen set a new record for consecutive Grand Prix points placings [25] by taking fifth position in an eventful British Grand Prix at Silverstone today. The Finn ran as high as second place in a race punctuated by safety car periods and characterised by an unusual amount of tyre failures.

Romain Grosjean had a more difficult race, from which he retired at the end due to a front wing failure. Kimi leaves Silverstone third in the Drivers’ Championship while the team remains fourth in the Constructors’ Championship.

“We had good pace and looked set for a pretty easy P2, but this is racing sometimes”

“I tried to hold on at the end of the race, but with tyres that were maybe twenty laps older than the others’ it was impossible to keep them behind. It’s a shame as the race went pretty well until then; we had good pace and looked set for a pretty easy P2, but this is racing sometimes. It’s three races now where we haven’t had the result we maybe expect, but hopefully if we can have a bit more luck and also get rid of some of the mistakes we’ll be able to get back to the front.”

“It’s a race I’d rather forget. Let’s go to Germany and have a better weekend”

“Towards the end of the race we lost quite a big part of the front wing meaning it became really difficult to drive, so in the end it was best to retire because of safety considerations. We don’t know if it was caused by some debris or something to do with the fact that it was a new part; we will be working to find out the root of the problem. Before that my race wasn’t going quite to plan and we were suffering with tyre performance. This was related to the front wing issue which started earlier in the race. The safety cars didn’t really go our way either so it’s a race I’d rather forget. Let’s go to Germany and have a better weekend.”

“The outcome of the race isn’t rewarding with the amount of work that has been done by the team recently. Most of the upgrades we brought here seem to be working which is a positive sign, although we did struggle a bit in qualifying to generate good grip from the tyres. Our strategy was great today until the last safety car when we should have called Kimi in to save at least one position and make the podium. Unfortunately, we made the wrong call for which we apologise to Kimi and to the team. This sometimes happens and it isn’t easy to manage when you have so many safety car periods. We will be in Germany in a few days’ time where we’re confident we will be competitive and aiming to make amends.”

“In hindsight, we should have pitted Kimi at the final safety car”

“We have mixed feelings today. We made some good places up during the race but in hindsight, we should have pitted Kimi at the final safety car. It wasn’t obvious at the time, but the benefit of hindsight is always enlightening. Romain had a front wing failure near the end of the race, the cause of which we don’t know yet. We weren’t affected by the tyres issues that we have seen today but warned our drivers to stay clear of the kerb at Turn 4 as there was a suspicion it might be the cause. Despite not being as good as it could have been, it was a better weekend for us than the last two. Further upgrades we have coming for Germany mean we fight on.”

Ricardo Penteado, Renault Sport F1 Team Support Leader
“A positive Grand Prix on our side and we got the most we could from the engine performance. We decided not to run with new units to retain some flexibility for later in the season; this year it’s very unpredictable so we need to keep as many aces up our sleeves as we can. Obviously we would have liked to end up on the podium, particularly after Kimi’s performance, but a top five finish is important with our rivals scoring big this weekend. We’ll try and redress the balance next weekend.”

The successor to the long running Lamborghini Gallardo, named the Gabrera, has been spotted on the usual testing grounds in […]

– Press Release Hiroshi Hamaguchi has announced his participation in the GT Asia Series. The sensational Japanese driver will be […]