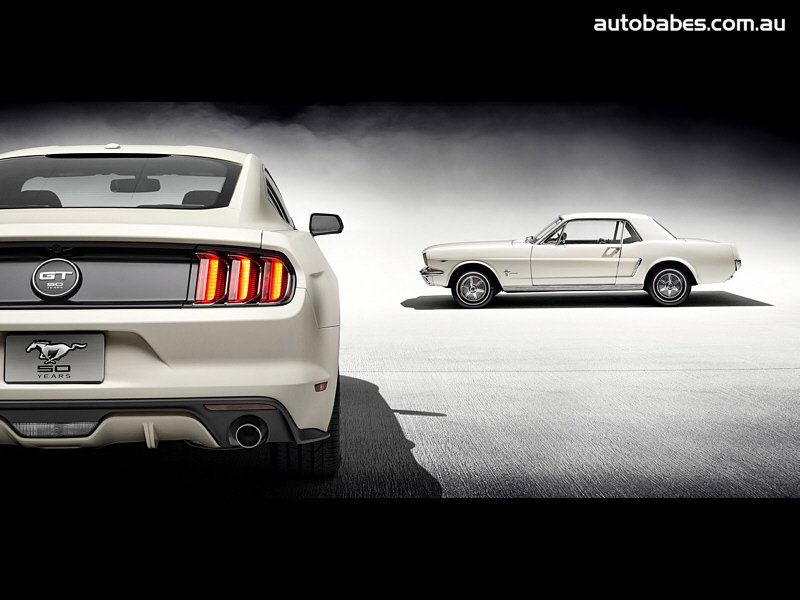 In 1964, Ford unveiled what was then their brand new sports car, the Ford Mustang at the World’s Fair in New York City.

In celebration of the 50th anniversary, ie 50 years later, Ford officially released the limited edition 2015 Mustang at the appropriate location of the New York Auto Show!

The 50th Anniversary Mustang will be limited to a run of a symbolic number of 1,964 rear-wheel drive coupes only. There is not yet a reference to a convertible model, but we do know that the coupes will be based on the all-new 2015 Mustang GT fastback, with the factory performance pack included.

Initially, the only choice of color for the buyer will be either Wimbledon White (as shown here), or Kona Blue. A six-speed manual or a six-speed automatic gearbox is also on the options list for the buyer.

As an anniversary model, of course there are appointments that will be exclusive to this model. These include the very discreet chrome highlights and louvered rear quarter windows, a faux gas cap badge on the rear fascia, cashmere-stitched, leather-wrapped steering wheel, with the same styling carried over to the instrument panel, gear shifter boot, center console cover, door inserts and the seats. The front bucket seats are upholstered in two-tone cashmere and black leather, with the 50th anniversary logo on the seat backs.Of course the engine is Ford’s 5.0-liter V8, which produces 420 horsepower and 390 pound-feet of torque. As part of the Performance Package inclusion adopted from the Mustang GT models, are six-piston Brembo front brakes, 19-inch alloys and high-performance, street legal tires.

– Special-edition Mustang comes standard with nearly every available option; the only choice customers have to make is color, and manual or automatic transmission

– 2015 Mustang 50 Year Limited Edition will be available in fall 2014; only 1,964 examples will ever be builtNEW YORK, April 16, 2014 – Fifty years after debuting one of the world’s most popular cars, Ford is marking the milestone by revealing a Mustang 50 Year Limited Edition. Created to honor five decades of Mustang heritage, only 1,964 examples of the 50 Year Limited Edition will ever be built when it goes on sale this fall.“When Mustang was approved for development more than 50 years ago, I don’t think anyone imagined it would spawn such a dedicated base of fans around the world and still be in production today,” said Bill Ford, executive chairman, Ford Motor Company. “We are thrilled to be here in New York – where Mustang was first shown to the public at the 1964 World’s Fair – to re-create that historic event for today’s Mustang enthusiasts.”Based on the all-new 2015 Mustang GT fastback with performance pack, the 50 Year Limited Edition is designed to provide customers with outstanding performance and a unique appearance that will be instantly recognizable on the road. The only options for the 50 Year Limited Edition are the choice of two exclusive colors and a six-speed manual or automatic transmission.50 years of inspiration“The new Mustang blends a muscular, contemporary shape with design cues that define it as quintessentially Mustang,” said Moray Callum, Ford vice president of design. “The 50 Year Limited Edition adds details that set it apart from other Mustangs, while hearkening back to the 1965 original.”The only two available colors are Wimbledon White, like Mustang serial No. 0001 that was first sold to Capt. Stanley Tucker in April 1964, or Kona Blue. Both are exclusive to this limited- edition car.“Chrome trim was much more prevalent on cars in the 1960s than it is today, so we added some discreet highlights for the grille, side glass and tri-bar taillamps,” said Callum. “The darker Kona Blue provides a particularly striking contrast against the chrome.” Chrome bezels surrounding the base of each of the three taillamp blades take inspiration from the original 1962 design proposal by Gale Halderman that became the basis for the production model that debuted in 1964. The three individual lamps on each side of that design were combined into a single tri-bar lamp cluster for production, but the original concept has returned five decades on. The Mustang 50 Year Limited Edition will be the only 2015 model with the large faux gas cap badge on the rear fascia, with 50 Years added to the GT designation.Another visual element that won’t be found on any other Mustang is the louvered rear quarter- windows. Unlike the external louvers on the quarter-windows of the 1965 fastback, the new windows are comprised of layered sheets of glass built with a construction technique uniquely developed for this car.Unique cockpit experienceFrom behind the wheel, drivers will know they are driving a very special car. The aluminum trim panel that spans the double-brow instrument panel gets an axel spin finish different from other 2015 Mustangs, plus a special serialized 50 Year Limited Edition badge on the passenger side. Each badge will be individually etched at Flat Rock Assembly Plant where Mustang is built.The limited-edition is the only 2015 Mustang with a cashmere-stitched, leather-wrapped steering wheel. The stitching is also used on the instrument panel, shifter boot, center armrest, door inserts and seats. The seats feature exclusive two-tone cashmere and black leather upholstery, and the Mustang 50 Year logo on the seat backs.Limited-edition cars will be equipped with loop-carpet floor mats with cashmere stitching and suede binding not available on other Mustangs.A showpiece meant to be driven“Mustang fans love to drive their cars, even the rarer examples of the breed, so we built this limited-edition from the best-performing 2015 Mustang available – the GT fastback with the performance pack,” said Dave Pericak, Mustang chief engineer. “While some collectors will undoubtedly stash this car away in a museum, those who choose to hit the open road will get a world-class sports car that can run with the best.”Powered by the upgraded 5.0-liter V8 engine delivering more than 420 horsepower and 390 lb.- ft. of torque, every 50 Year Limited Edition will be equipped with the Mustang GT performance pack that includes massive six-piston Brembo front brakes and 19-inch alloy wheels with high- performance Y-speed-rated Pirelli P-Zero summer tires.The 19-inch alloy wheels feature a unique Y-spoke design inspired by the chromed steel wheels that were offered on the original Mustang 50 years ago. The front wheels are 9.0 inches wide with 255/40R tires, while the staggered rear wheels are 9.5 inches wide with 275/40R tires.The 50 Year Limited Edition is the only 2015 Mustang that will be available with a combination of an automatic transmission and the performance pack. When equipped with the six-speed automatic transmission, the Mustang 50 Year Limited Edition will get a limited-slip rear differential with a 3.55:1 final-drive. Customers who opt for the six-speed manual will get a Torsen differential with a 3.73:1 final-drive ratio.The 50 Year Limited Edition car will be among the first 2015 Mustangs built when production begins later this year. Each of the 1,964 50 Year Limited Edition Mustangs will get a unique owner’s guide in a leather portfolio with the 50 Year badge on the outside. “We wanted to provide our most dedicated fans with the emotion of the original Mustang in a 21st century car,” said Ford. “With this 50 Year Limited Edition, I believe we have accomplished our goal.”

Pic of the Day; Samantha Lee for Edition 52 – The Sexy Beach Girl Edition

It seems the virtual world continues to delight us with experiences not yet available in the real world. Beginning January […]