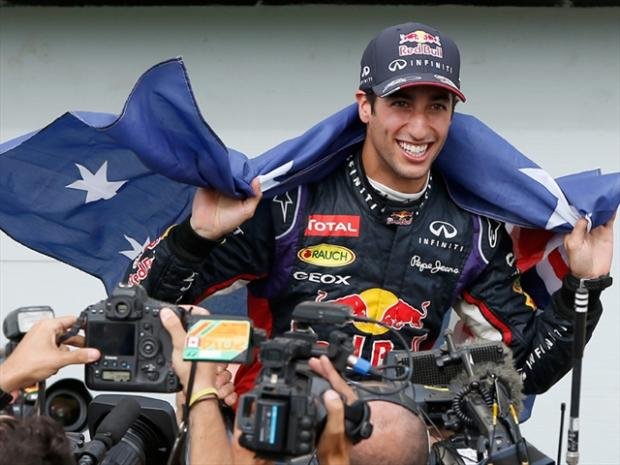 The Australian was beaming with pride after clinching his maiden victory in dramatic fashion in Montreal on Sunday, ending Mercedes’ early-season domination.

Ricciardo capitalised on power and electrical problems that hit both championship leader Nico Rosberg and Lewis Hamilton to take the lead with just two laps to go.

“It’s still a little bit surreal. It’s not like we were leading the whole race, so it’s not like I had time to understand that I was going to win.”

Briton Hamilton was forced to retire with brake issues but German Rosberg managed to nurse his car home in second, ahead of Ricciardo’s teammate and defending four-time champion Sebastian Vettel.

“We had a problem at the pit stop and that’s why I dropped behind,” said Rosberg.

“Then I lost a lot of power in the straights, but it did not quite work out. I couldn’t hold off Daniel Ricciardo.”

Rosberg’s second place allowed him to open up a 22-point lead on Hamilton in the championship standings. Ricciardo has moved up to third, 71 points off the lead.

The final lap was run behind a safety car after a horrifying high-speed collision between Force India’s Sergio Perez and Williams driver Felipe Massa sent both into the barriers.

Perez and Massa, whose impacts were measured at 27G, escaped serious injury but were both taken to the circuit medical centre for precautionary examinations.

Ricciardo’s win, Red Bull and Renault’s first of the season, meant he has now beaten Vettel in the last five races.

“It’s his day. We had a big help from Mercedes, unlike other weekends, but we were there to capitalise. It’s been a positive day.

“Daniel’s first win and a first win for Renault in the new era of engines. They have had a good comeback although there is still plenty of work ahead of us because Mercedes are quicker down the straight, but all in all it’s been a good day.”

The win will no doubt provide a shot in the arm for Red Bull, who next head to Austria for their home race on June 22.

“If we could repeat this result in Spielberg, I think Austria would explode with happiness!” said Ricciardo.

“I have heard that the race is fully sold out, and I am sure with today’s result there are no tickets left whatsoever.”

The German Grand Prix has been dropped from the Formula 1 calendar for 2015, due to disagreement on hosting fees. F1GP […]

The successor to the long running Lamborghini Gallardo, named the Gabrera, has been spotted on the usual testing grounds in […]