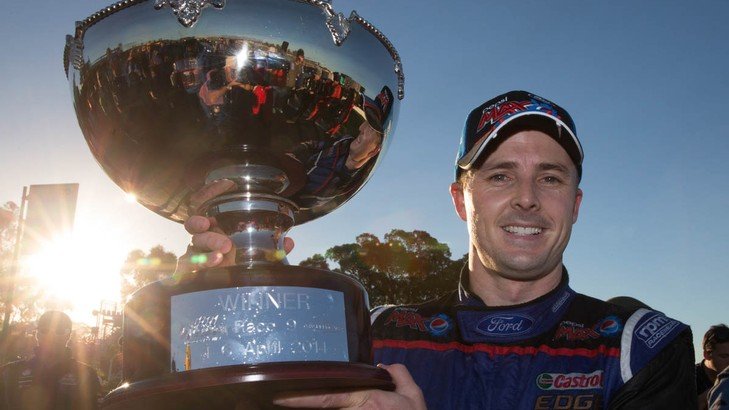 Sunday 6 April 2014 17:27 – Mark Winterbottom has won a race at Winton Motor Raceway for the second consecutive year, becoming the sixth different driver to win this year and scoring the first victory for Ford in 2014.

It was an emphatic 9.49 second victory over James Courtney, and has catapulted the Ford Pepsi Max Crew driver to second in the Championship points, behind Craig Lowndes.

“That’s awesome, to obviously have a pretty good weekend and cap it off with that,” Frosty – who drove incredibly from 23rd to third yesterday, said.

“I have to thank the team, they’ve done a pretty good job. Tyre life was not as strong as yesterday… (It’s been a) bit of a hard start, but hopefully it’s the start of many (wins).”

He promised to continue hunting down Lowndes and was pleased with the weekend’s strong points haul.

“This is fantastic – the guys did a good job to turn the car around and good clean stops and car strategies,” he said.

Walkinshaw Racing stablemate Tim Slade followed home in third, despite his team losing a wheel during a pit stop. They were penalised 300 team points and fined, Slade and his Supercheap Auto Racing Commodore left out on-track to complete the race.

Meanwhile a number of penalties punctuated the race with two top contenders – and three others – pinged for pit lane speeding.

Scott McLaughlin and Fabian Coulthard, as well as the second Volvo of Robert Dahlgren, Rick Kelly and Russell Ingall all completed pit lane drive through penalties despite their protests over the radio.

This afternoon’s run shakes up the Championship, with Winterbottom just 28 points shy of Lowndes, Coulthard dropping to third, Courtney back into fourth and Whincup completing the top five.

– Press Release A new era is beginning for Automobili Lamborghini and the luxury super sports car segment: with the […]

– Press Release The Jaguar F-TYPE Coupé – the most dynamically capable, performance-focused, production Jaguar ever – will make its […]

Talks about a Led Zeppelin Reunion Tour Dismissed but New Albums Due Soon.

Robert Plant, the Led Zeppelin vocalist, has assertively dismissed all talk of a group reunion, whilst taking a swipe at other ageing rockers who […]