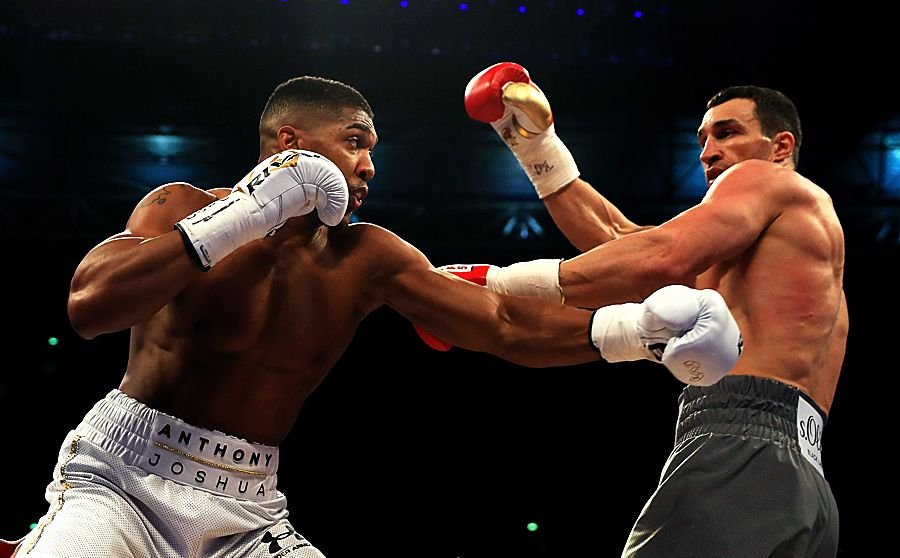 Pre-empting the result, and keeping in line with his usual style, British Heavyweight champion Anthony Joshua thought he’d won the fight in the 5th round when challenging fighter Wladimir Klitschko went down hard !

At least not yet!

However in the 11th round, four rounds longer than his previous fights, the Champ delivered a devastating powerhouse uppercut to the jaw of the 6’6″ Russian that sent him down twice to seal the title officially with a TKO ruling.

The win was in front of a record crowd of 90,000 at Wembley Stadium and confirmed 27 year old Joshua as the new Heavyweight Boxing superstar with the title from IBF, WBA Super World and IBO !

“When you go to the trenches, that’s when you find out who you really are,” Joshua said. “In this small little ring here, there’s nowhere to hide.”

Klitschko did show courage in his fight back after he was knocked down in the fifth round, and by end of that round, he had served an aggressive attack on a dazed looking Joshua.

In fact in the sixth round, Joshua wasn’t feeling any better and the 2012 Olympic Gold Medallist who was fighting his 19th professional fight did go down ..

“If you don’t take part, you’re going to fail,” Joshua said. “Just give it a go and you never know the outcome.”

A more experienced Klitschko was in his 29th world title fight and did seem to be taking control and dominating the rounds since he was knocked down, but the uppercut was devastating to his form and did have him spinning badly.

“It was really sad I didn’t make it tonight,” Klitschko said. “I was planning to do it. It didn’t work. But all respect to Anthony.”

The fight was seen as a battle of the giant heavyweights, as both fighters stand 6’6″ with Joshua weighing in a little heavier at 250.1 pounds against Klitschko’s 240.5.

Klitschko’s career began in 1996 following an Olympic Gold in Atlanta, but in the end, in what he says may be his last fight at the age of 41, history will record that he was beaten he was beaten by the Olympic champion from the 2012 Olympics in London.

Muhammad Ali may have passed away, however the legend remains; of a magnificent world heavyweight champion, with dancing feat, fast fists, […]

As hinted in the prelude article to this event, London boxer and fight favorite Anthony Joshua has risen victorious against […]