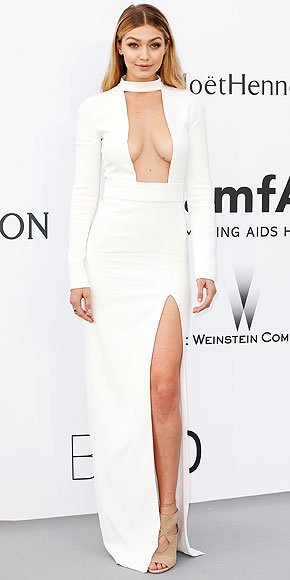 Gigi Hadid, the 2014 Rookie of the Year for Sports Illustrated’s Swimsuit Edition has drawn attention on the Red Carpet of recent Cannes Gala in France.

The young model made even the most plunging neckline seem outdated when she stepped out in a white full frontal cut-out designed by Tom Ford.

Besides the Sports Illustrated title, Gigi is also known for her work with Victoria Secrets appearing on their Pink Collection. She also has credit for a series of Vogue Fashion shoots and representing make-up brand Maybelline.

“I try and do work I’m proud of everyday”, says the young model, ” I think my Vogue covers have been very defining moments for me, as is the signing of my Maybelline contract.”

Recently, Gigi appeared at the Formula 1 in Monaco in support of Lewis Hamilton’s Mercedes team.

In Australia, Gigi is known for her relationship with Aussie singer/songwriter Cody Simpson. Gigi and Cody have recently separated to pursue their careers.

Australian Daniel Ricciardo has finished third in the British Grand Prix, as Lewis Hamilton revived his world championship bid with […]