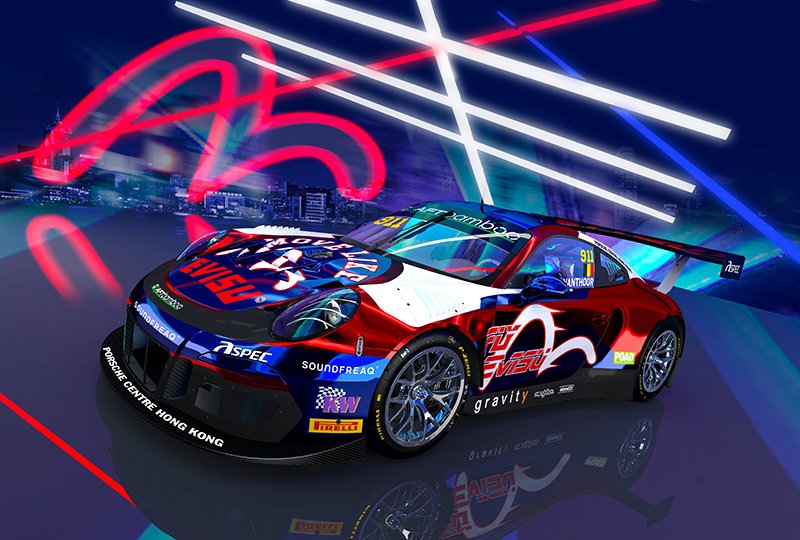 Vanthoor’s #911 Porsche GT3 R debuts a stunning chrome livery that reflects the iconic design trademarks that EVISU has become known for since launching as an exclusive Japanese denim brand in 1991. The now infamous hand-painted seagull logos that adorned the back pockets of EVISU’s Japanese selvedge denim, boldly takes its place on each flank of the car and is supported by EVISU’s motorsport tagline, ‘Fly EVISU’. Dominating the front of the #911 Porsche and Vanthoors’ race suit is the ‘Move Like EVISU’ slogan, which has been extended from their most recent collaboration campaign.

The EVISU and Craft-Bamboo Racing linkage is natural, as the team’s latest 991 generation of 911 Porsche race cars matches EVISU’s founding year of 1991, which helps to commemorate the launch of one of Japan’s most successful international lifestyle brands. Tying together this automotive fashion statement is the shimmering chrome colour scheme that pairs hues of red and blue, which should make the EVISU Porsche a commanding standout on the grid come race day.

In celebration of Craft-Bamboo Racing and EVISU’s partnership, Vanthoor will make an instore appearance at the EVISU store in the Elements shopping centre in Hong Kong on the 14th of November, from 2-4pm. The champion GT driver will be conducting an autograph session, photoshoot with fans, and will even be honing his skills on a driving simulator while trying on some of EVISU’s latest range of clothing.

Fans will also be able to purchase EVISU t-shirts and scale model replicas of the #911 Porsche, which will be exclusively available at the Macau FIA GT World Cup. Eager fans of the collection must stay tuned for the launch at EVISU stores after the premier GT race of the year.

The FIA GT World Cup is the annual showdown for the world’s top GT drivers and teams and has become the new reference event contested on the grueling 6.2km Macau Guia street circuit. Laurens Vanthoor in the #911 Porsche GT3 R will join fellow Craft-Bamboo Racing driver, Darryl O’Young, in the #991 VLT Porsche 911 GT3 R and will both be challenging for a world championship victory from the 16th to 19th of November.

“Craft-Bamboo Racing are really excited to work with a global brand like EVISU. They have a very loyal fanbase, so to create a fresh campaign that connects them to motorsport is an exciting challenge for our marketing team. We look forward to a strong race weekend with Laurens and hope to deliver EVISU a strong result on and off the track.”

“We are ecstatic to be partnering with motorsport powerhouse Craft-Bamboo Racing and Porsche GT factory driver Laurens Vanthoor to take on the Macau FIA GT World Cup. This and other new collaborations will exemplify how the brand is broadening customers’ understanding of EVISU’s values in its products and lifestyle. I can’t wait to see EVISU shake things up at the infamous Macau Guia street circuit!”

Craft-Bamboo Racing gears up for a 4-car assault in the Blancpain GT World Challenge Asia!

After a successful pre-season test, Craft-Bamboo Racing are looking to begin the 2019 Blancpain GT World Challenge Asia season at […]