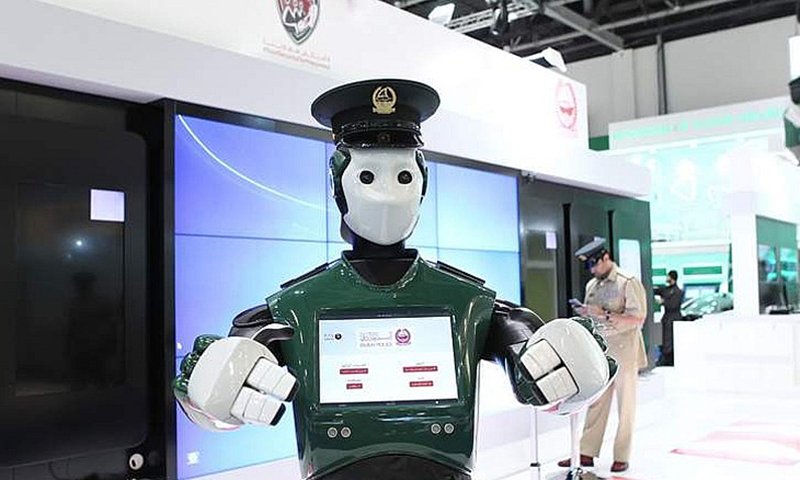 The Dubai Police Department has unveiled the world’s first, fully operational and field based Police Robot at the Gulf Information Security Expo and Conference!

The Police Robot is named after the popular movie of the same name starring Sylvester Stallone.

Robocop was on display at the Expo where guests were able to meet and interact with the 5’5″, 100kg police recruit. With the ability to read facial expressions, and a vocabulary that spans 6 languages, there were no commuiincation barriers.

Robocop also features a built in tablet to allow people to pay fines and report crimes straight directly. Robocop is obviously internet connected and can send and receive messages from police headquarters for on the go instructions and inquiries fro the public.

The Director-General of Smart Services with the Dubai Police, Brigadier-General Khalid Nasser Al Razzouqi, said in a statement:

“The launch of the world’s first operational Robocop is a significant milestone for the Emirate and a step towards realising Dubai’s vision to be a global leader in smart cities technology adoption.”

“With an aim to assist and help people in the malls or on the streets, the Robocop is the latest smart addition to the force and has been designed to help us fight crime, keep the city safe and improve happiness levels. He can chat and interact, respond to public queries, shake hands and offer a military salute.”

After being unveiled at the Expo on Sunday, Robocop is expected to tackle real life issues when it is released into the real world after the event ends later this week.

Of course it may be a few years before Robocop develops the intelligence and agility of his namesake from the Stallone film;

Kia’s Stinger GT is set to be Highway Patrol Car

Kia’s new Stinger GT is high on the Australian Police Force radar as a candidate for Highway Patrol Car! Kia […]

NSW Cops get a Porsche !