Having claimed second position outright in the GT4 category in his maiden season of the CAMS Australian GT Championship, David Crampton is looking to take the striking bright orange Vantage Freight KTM X-Bow one better this year, the Sydney-sider admitting that 2018 was a real baptism of fire..

“It was one hell of an experience to say the least,” the affable GT-rookie admitted. “It started with a ‘bang’ at Bathurst [12-Hour] which was a lesson in itself, but thanks to M-Motorsport and my team-mates, they soon had me re-focussed and ready to compete with the Australian GT regulars.

“The biggest issue was getting up to speed more quickly, and focussing on the job at hand. There’s a big straight line speed differential between the GT3 and GT4 cars, but I just had to concentrate on being quicker as soon as I jumped in the car, and to hold my lines. That took a bit of getting used to, but it turned out well – with the exception of Sydney – the leading GT guys know that they’ve got to get around you, and their biggest issue is making sure they can predict where you’ll be. It wasn’t quite so simple with some of the European drivers at Bathurst, but I’d essentially only done one test session at Phillip Island in the leadup, so that was a different story!”

Damage as a result of Crampton’s contact at Forrest’s Elbow in the early morning light of the Bathurst 12-Hour saw the #50 KTM sidelined for the AGT season opener at the Grand Prix, but by mid-April Crampton and new team-mate Trent Harrison were right in the mix in the opening endurance round at the new Bend Motorsport Park in South Australia. The pair finished third on their Australian GT debut, claiming a 1-3 for the M-Motorsport KTM operation with team-boss Justin McMillan and Glen Wood claiming the GT4 category win.

“That gave me my confidence back and I was able to put that to good use, but I made another rookie error at Sandown in qualifying, fighting for track position with Jeremy Gray in the Aston, that contact put us out with gearbox failure – in an incident I should never have been involved in. That could well have cost us the title..!

“I have to give full credit to Justin, Trent and the team, they stuck with me and we came up with a plan on how to best achieve my goal of being competitive and they’ve worked with me to ensure that everything fell into place, and now we’re starting to see the light at the end of the tunnel.

“To be honest, four seasons of driving the Radical SR3 might have given me a few bad habits and my brain was attuned to how to hustle one of them around. The SR3 is a brilliant car, lightweight, nimble, good aero, and I kept telling myself the KTM was similar – it’s not, but it’s also a nimble car with pretty good aero, it just required a different approach.”

Next time out at Phillip Island Crampton and Harrison were in the box seat for victory in the red-flag plagued endurance race, but again experience cost the duo whilst leading, a slow pit stop allowing the Jorgensen/Strom BMW through to the lead and despite the best efforts of Harrison to close to within two tenths of a second, the KTM duo were forced to settle for second place.

Then came Sydney Motorsport Park where the #50 Vantage Freight entry was in with a mathematical chance of title victory and in dire need of a clean run at the front. Qualifying started strongly with Harrison setting the pace, the KTM going on to their first race win of the year – it was looking good – but by race two things looked a bit different..

“We were running strongly again and leading the class, but whilst sitting pretty with just a couple of laps to go, I got cleaned up in the incident between Nick Kelly and Andrew Miedecke coming out of turn three and turfed pretty hard into the barriers.

“It was a pretty big hit again, but like Bathurst the tub was okay and importantly, so was I, but the damage was done to our championship assault so that was basically game over.

“It had been one hell of a season and I’d learnt a lot. The team were outstanding and I knew then I wanted to put that experience to good use this season, so from there it was just a matter of turning more miles in the car in testing. We went to Challenge Bathurst in November and I made a big step forward with my performance, and we’ll do some more testing again ahead of the Grand Prix to ensure that we come out fighting for the title this year.”

Harrison will again join Crampton for the endurance rounds, whilst Justin McMillan is a likely starter in the #48 M-Motorsport KTM, the two Audi-powered X-Bows [pron. cross-bow] likely to be strong contenders for the 2019 GT4 title.

“I love the GT4 concept and I hope it attracts plenty of entries this year,” Crampton admitted. “Mileage wise they are fantastic value for money, running costs are down and bang-for-buck they’re brilliant – they’re also fantastic to drive, especially on the twisty stuff, they just monster the GT3 cars and that’s a lot of fun!

“There’s a good program on offer for Australian GT this year, a good mix of circuits I know and a couple that will be new, whilst the two street races will be a good test and will keep us in the fight a little more than the power circuits like Phillip Island and Sandown.”

The opening round of the 2019 CAMS Australian GT Championship will begin at the Australian Grand Prix in Melbourne between the 14th and 17th of March. 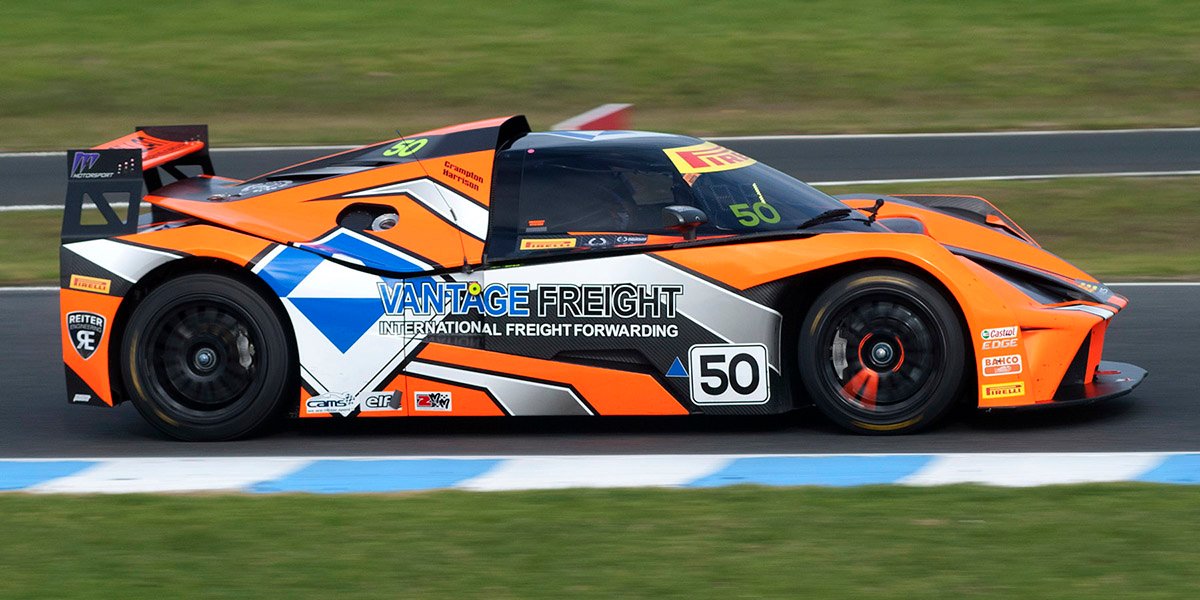