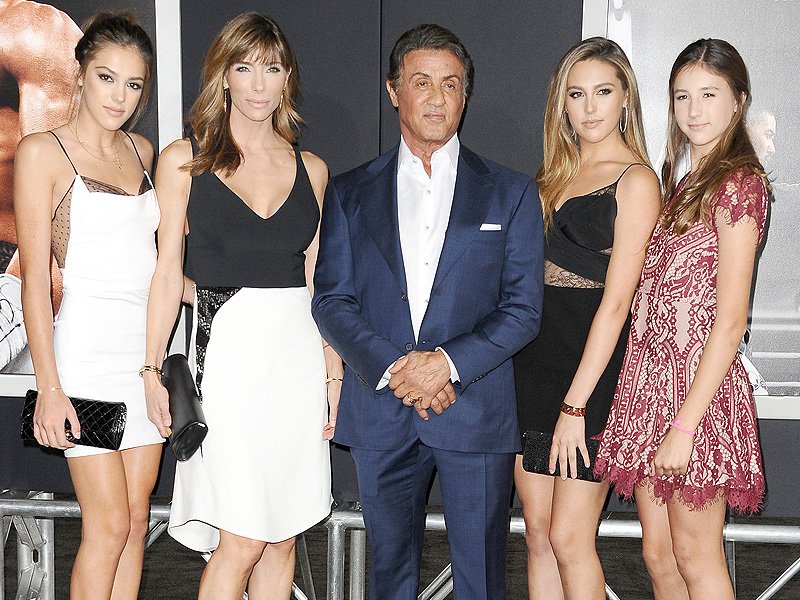 Sylvester Stallone attended the premiere of the latest installment of the Rocky series flanked by gorgeousness of knockout proportions! The Hollywood superstar brought his gorgeous wife and daughters along and the whole family had a glow that stunned everyone!

Stallone’s family is made up of wife, Jennifer Flavin, in a flowing black & white dress with black shoes, oldest daughter, 19-year-old Sophia and 17-year-old Sistine each in a black and white mini-dress respectively, while 13 year old Scarlet, wore a printed red dress with low-heeled shoes.

At the age of 69 years young, Stallone himself was not too shabby in a Bond style navy suit with white shirt.

Of course the reason they were there, was the premiere of Stallone’s film “Creed” which continues where the Rocky films left off.

In this film, we see an emotional side as the now aging Rocky is asked by the son of Apollo Creed (Rocky’s opponent from the original Rocky and sequel film), to train him to follow in his father’s footsteps.

Rocky himself has hung up the gloves and does not return to the ring in Creed, but appears to have left some of his style in his protege Adonis Creed, who is played by Michael B. Jordan.