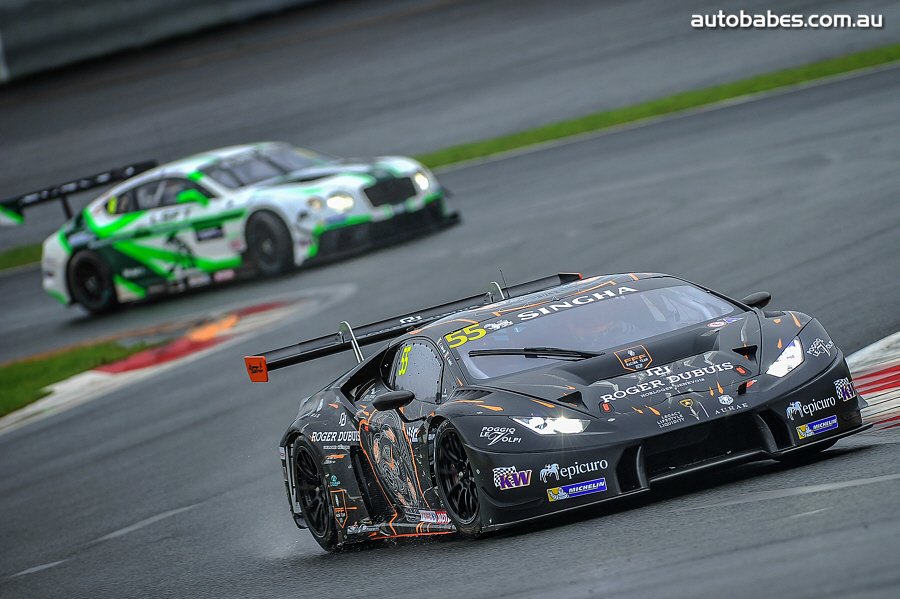 Unpredictable and outstanding racing right through the field have been hallmarks of the 2016 GT Asia Series season to date, and round eight at Fuji International Speedway proved to be no different, delivering the sixth different winning combination of the year, after Italians Andrea Amici and Edoardo Liberati took the FFF Racing Team by ACM Lamborghini Huracan GT3 to its maiden victory in Asia.

Behind them an intense battle played out for the remaining podium positions, with Bentley’s South Korean stars Keita Sawa and Jonathan Venter forging their way through on team-mates Vutthikorn Inthrapuvasak and Duncan Tappy in the closing stages for second, whilst the fastest man at Fuji – Craft-Bamboo Racing’s Richard Lyons – turned in an epic drive to work his way back onto the podium for the second time in two days.

The big news for the fans ahead of the start of Sunday’s second race though was the return of the BBT Ferrari which had suffered a technical failure in race one, the Chinese team provided a life-line by rivals Clearwater Racing who completed their 2016 season one race early, making a selfless move by electing to donate the engine from the #3 car to the #37 team so they could continue their battle for the title.

The BBT Ferrari duo may not have made the podium after starting rear of field, but their eighth placed finish has kept them right in the title chase heading ‘home’ to Shanghai next round (19-21 August), the result also putting team-leader Anthony Liu back on top of the hotly contested Pro-Am Cup standings.

Race#2 (Round#8)
Andrea Amici in the FFF Racing Team by ACM Lamborghini led the field into turn one off the rolling start, but it was 2015 Fuji winner Keita Sawa who made the greatest impression to charge up the inside of Ash Walsh in the Aston on the run to turn one, the Australian having inherited a front row start with the BBT Ferrari forced to start rear of field after their overnight engine change.  Sadly for Walsh, who was expected to challenge the leaders, a spin at turn three as he went for a move on Sawa dropped him back to rear of field, his charge back through to the top four ahead of the compulsory pit stops [CPS] one of the highlights of the opening leg of the race. For Marchy Lee the spin also cost the two-time 2016 race winner, the gold Bathing Aape Audi forced to take avoiding action as the big Aston inverted itself.

Up front though Sawa locked onto the tail of the #55 Lamborghini and the pair started to pull away from the pack, but just as quickly Sawa’s pace began to drop, the Japanese driver aware that all was not right at the front of the car, soon discovering from the crew in pit lane, that the car was suffering from a broken splitter. Within a couple of laps the hometown hero had found a way around the issue and began to find some more pace in the #8 Bentley, but by then Amici was gone.

Behind the leaders Marchy Lee was on a charge, working his way quickly through the pack and onto the tail of Naiyanobh ‘Toy’ Bhirombhakdi, putting an aggressive move on the VLT Porsche driver through the turn 10-11-12 complex ahead of an even bigger move under brakes on the #12 Ferrari of Piti Bhirombhakdi at turn 14.

Looking to make up places early, Lee fired in deep under brakes – so deep that Bhirombhakdi turned into the apex of the corner not expecting it to be filled by an Audi braking hard for the corner. Contact ensued and Lee paid the price, forced down pit lane the following lap for a drive through penalty.  Behind the leading trio a great battle was evolving between Vutthikorn in the #9 Bentley, Anthony Liu and Walsh in the Aston Martin, with both Liu and Walsh keen to make up for their opening lap issues. Liu tried everything on the Bentley driver, but Vutthikorn was using the bulk of the British-built supercar to great effect, the Ferrari at times with all four wheels on the grass looking for a way past.

Sawa was one of the first down pit lane once the CPS window had opened, handing the car across to team-mate Jonathon Venter who fired out pit lane as the leader with a fresh set of Michelin slicks, but no sooner had he braked for turn one, than he locked a right front tyre and ran deep into the corner, losing the top spot to the #55 Lamborghini, then very quickly team-mate Duncan Tappy.

Venter though soon regrouped whilst reporting an intermittent ABS (braking) issue back to the garage, the Australian though adapting his driving style to counter the issue and lock back onto the tail of the #9 Bentley.

Behind him the Craft-Bamboo Racing team had pulled Frank Yu into the pits from P7, the team quickly inserting Richard Lyons into the #88 Interush Porsche and sending him out with a fresh set of Michelins for what would be one of the most impressive stints ever seen in GT Asia, the Ulsterman on lap record pace lap after lap to work his way through from eighth to third at the flag..
Up front though there was no question about the winner, Edoardo Liberati bringing the gorgeous black Roger Dubuis liveried Huracan across the line 10-seconds clear of Venter with Lyons incredibly third in what he described as one of the toughest stints of his life, whilst Liberati admitted he too had his work cut out for him in the closing laps [nerves] citing a personally tough start to the season.

Fourth was Vutthikorn who earned more valuable championship points, from George Miedecke in the Aston Martin Vantage with Alex Yoong again showing a great turn of pace to be sixth. Race one winner Carlo Van Dam was seventh in the Singha Motorsport Ferrari 458 ahead of former points leader Davide Rizzo. The Italian Ferrari driver was forced to settle for a position further back than he would have liked, having gained the best from his tyres early in the stint before being unable to fend off Lyons, Yoong and Van Dam.

Despite the setback for the weekend with the opening race engine failure, Liu’s result handed him back the points lead in the Pro-Am Cup standings leading into Shanghai, an event the team have enjoyed great success at in during past seasons, so don’t rule them out of the title fight for a second, they’re still right in it heading into the final four races.

Whilst the leaders battled at the front of the GT3 field, further back an incredible battle was underway in the GTC class with Kantasak Kusiri and Toshihito Funai battling nose-to-tail for much of the final 30-minutes of the race, Kusiri ultimately emerging victorious for Singha Plan-B Motorsport, whilst Ken Seto limped the Team Rosso Scuderia 458 Challenge car home in third after suffering a late race technical issue.

The Series now moves from Japan to China for the final two rounds of the season, Shanghai (19-21 August) and the debut event for the new Zhejiang Circuit in southern China (21-23 October).

What the drivers had to say;

1. Andrea Amici (#55 FFF Racing Team by ACM Lamborghini Huracan GT3)
“This is a really great result for all the guys in the team, it’s a result that comes because of the help we get from Lamborghini who assist us with everything we need. We were not so fast on the straight, but we had the best handling car in the technical parts of the circuit. Sawa stayed with me for the first few laps, then I just pushed and tried to stay consistent to get the car to Edo to complete the race.”

1. Edoardo Liberati (#55 FFF Racing Team by ACM Lamborghini Huracan GT3)
“It was really intense, especially when you have such fast cars coming behind you, you have to keep the focus and concentration not to make any mistakes. I was also focusing on not using a lot of the tyre to make sure we could get through to the finish and have some in reserve just in case. We’re very happy with the result, Andrea and I don’t know many of these Asian circuits, so we don’t have previous experience, but coming into this race, both of us had only done three laps here in the dry, so thanks to YouTube which gave us some information from onboards to use and to the laps we could do on the simulator.”

2. Keita Sawa (#8 Bentley Team Absolute Bentley Continental GT3)
“It’s nice to be back on the podium again, the first since our two wins in South Korea. It wasn’t all easy, I had a problem right from the start with the splitter on the front, which I had to deal with all through my stint, so I didn’t push too hard until I knew it wasn’t a problem. Finishing second, especially as Fuji is my home circuit, is enough to make me very happy.”

2. Jonathan Venter (#8 Bentley Team Absolute Bentley Continental GT3)
“It was a really difficult race actually. I knew before I got in the car that the splitter was broken, so I knew that would affect the time a little bit. My out lap was a bit strange, I had a big lockup into turn one, which is strange in a GT3 when you have ABS, but the issue continued throughout the stint. As a result Duncan [Tappy] got past, but once I got into a rhythm I caught him again and wanted to get past as quickly as I could to try and catch the Lamborghini, but it was pretty clear they had great outright pace and consistency. Overall I’m pretty happy with second after the previous bad luck with the four rounds. This is good for the championship and good for the morale of the team.”

3. Frank Yu (#88 Craft Bamboo Racing Porsche GT3-R)
“I started from the left and knew immediately I was going to get pushed off, so I lost a couple of positions there, then the rest of the race was quite fun between me and my team-mate Toy Bhirombhakdi and Andrew Kim in the Bentley, so the three of us had a pretty good battle. Today we ran a revised setup, the car felt really good, I think we have found something in the car that will give us some consistency and speed across the rest of the season. We’re not there yet, but we’re not far away. Today though this race belonged to Richard [Lyons] he drove brilliantly.”

3. Richard Lyons (#88 Craft Bamboo Racing Porsche GT3-R)
“It wasn’t easy, so to do a 35-minute qualifying run was tough going, but nevertheless I enjoyed it. Frank set this up for us, because the move he put on the VLT car [Toy Bhirombhakdi] was absolutely amazing – what it meant was that we didn’t have to do an extra lap, because we didn’t want to stop the two cars in the pits together, and when that happened, I thought, yes, the race is on now! The car was fantastic, even on cold tyres, so I kept chipping away at the cars in front of me over the next few laps, and I could see more cars ahead, so wondered how many I needed to overtake to get to the podium. I asked my engineer not to say much today, but two laps from home he said the next car ahead of me was for the podium, so I gave it a good go.”

The 13th season of the RA Cup now open to all Radicals!

Like much of the global motorsport community, the promoters of the RA Cup found themselves with plenty of time to […]