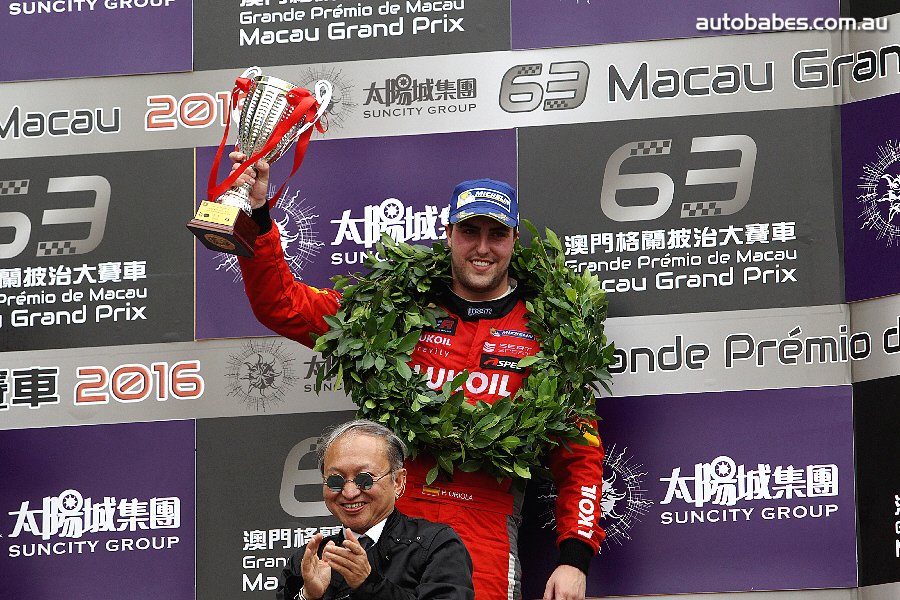 Team Craft-Bamboo Lukoil secured a hard fought third place podium from a P5 start during the final Macau Guia race this afternoon, but unfortunately lost the drivers’ championship by only 3.5 points after a series of misfortunes prevented the team from being able to truly challenge for the title. In archetypal Macau fashion, red flags, safety cars and race stoppages ultimately worked against James Nash’s championship, but Pepe Oriola was able to produce a brilliant performance in race two that saw him secure a spot on the podium. Sergey Afanasyev faced engine trouble from the start of race one and despite the team’s best efforts they were unable to get the Russian driver back out on track for either session.

James Nash began his race one charge from P7 and made a supreme start to move into P4 within the first half of the lap, while his teammate Oriola also began to move up the order, taking three spots to claim P7 before the race was suspended after a safety car period. The race was restarted under the safety car with only seven minutes remaining and Nash became boxed in by Dusan Borkovic and Mat’O Homola into Lisboa. Homola tried to go around the outside, hit the wall and made contact with Nash’s left rear wheel, forcing him to return to the pits with damage. This suspended the race once again and was restarted with only one lap remaining. Nash remained in the pit while the team worked to repair the car, while Oriola was able to push on after the restart and take P5 to set himself up for a strong race two challenge from fifth on the starting grid.

The Team Craft-Bamboo Lukoil crew quickly repaired Nash’s car and got him onto the grid in P18 and back into the fight, albeit in the face of surmounting odds. There was never a hint of Nash conceding and he exhibited incredible pace and overtaking skill on the tight Macau streets over the opening few laps to pass nine competitors before another safety car period and race suspension at the end of lap three. Oriola had maintained his P5 start position and was following closely on the tail of his rivals when the race was red flagged. The final race of the season once again began under the safety car, but by then it was already too late as only two laps remained. Nash still managed a pass and moved into his final finishing position of P8. Oriola engaged full attack mode at the race restart and with only two laps left he proceeded to close in on Stefano Comini and snatch away third place at the final moment to claim a third-place spot on the Guia podium. Nash had done his all but couldn’t overcome the 3.5-point difference needed to secure the drivers’ championship for himself.

“Typical Macau event really, interrupted by safety cars, red flags and lots of damage for everybody. In race one we didn’t get many flying laps but I got myself up into a good position at the start. After the race restart, I had a moment in turn one, which allowed Dusan Borkovic to get near me and same with Mat’o Homola; he stuck around the outside where there was no room and caused some damage. Thankfully, Craft-Bamboo are amazing and managed to fix the car for race two. I started P18 but got up to P9 within three or four laps. My aim was to get back into the points and if Comini didn’t finish we would have won the championship. Losing it by 3.5 points isn’t much but its Macau.”

“I am really happy with my podium, because starting from P10 in Macau and getting P3 is fantastic. Every chance I had to overtake I took, and it is great that we could get the podium for the team. It was a sad day because James lost the championship and I came fourth overall which is not what I wanted. I won the most races this year and it really shows the potential, we just have to work hard to make sure what happened this year doesn’t happen again.”

“It was my second time in Macau but also my second zero points record here, which is really disappointing because the guys did a fantastic job. They were pushing hard, they were preparing the car, they were analyzing everything and they were doing whatever it took. Finishing like this is not what I wanted for them, I wanted to get onto the podium or even win. We were unlucky with the engine but what can we do, its racing, its gambling, its Macau.”

“Clearly it is disappointing to lose the championship by three and a half points. We fought very hard all year and I couldn’t be more proud of our drivers and team and I must give special thanks to all our partners. I think we may have lost out to the event itself this year rather than the competition. Difficult to articulate the disappointment but I am hugely proud of everything we have done.”

Disney-Pixar’s ‘Cars’ franchise will partner with Craft-Bamboo Racing for the first two rounds of the brand new FRD LMP3 Series. […]