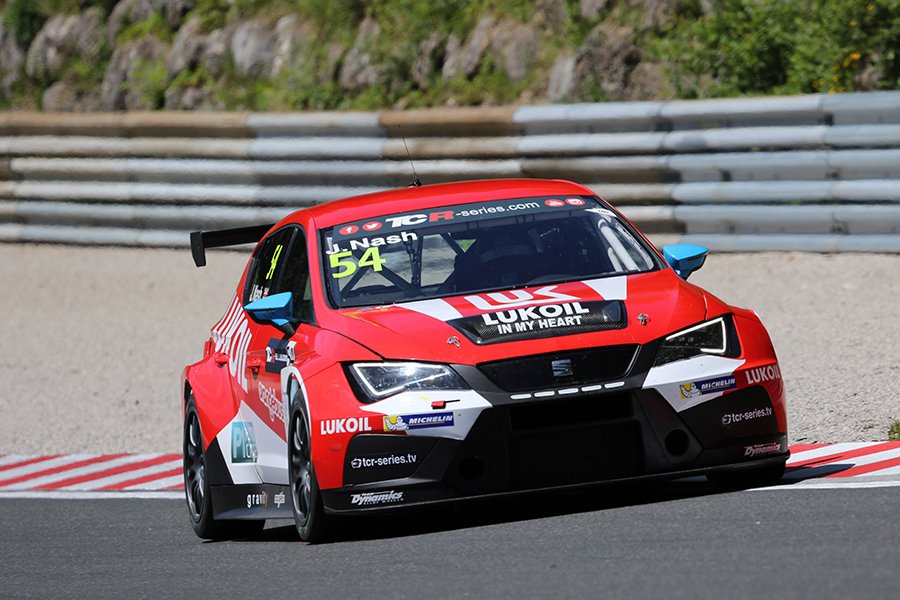 Lukoil Craft-Bamboo Racing overcame a difficult weekend at the Salzburgring after grappling with a lack of straight line speed at the 4.2km power circuit. The team did everything they could to mitigate the speed differential to the Alfa Romeo and Opel models but couldn’t close the gap. The team lodged a formal protest against the Alfa Romeos and Opels, requesting checks of their turbochargers. Following the report from the Technical Delegate, the stewards rejected the protest, but the team has decided to appeal. Therefore, the results of the Salzburgring event remain provisional. Despite this issue, all three Team Craft-Bamboo Lukoil SEATs were able to score points over the weekend. In race one Pepe Oriola scored P5, James Nash P6 and newcomer Daniel Lloyd P11 in his first ever TCR International Series race. Race two was also looking promising for Oriola, however a puncture sent him off the track and into retirement while he was in P5, which was an unfortunate way to end his weekend. Nash pulled off another solid performance to score P6 once again, followed by teammate Lloyd in P7, giving both a haul of points before the series heads to Hungary next weekend for round six.

Pepe Oriola made a strong start to hang on to his P3 starting position, while James Nash managed to gain a place as he dove into the first corner, snatching P4. Daniel Lloyd made his first ever TCR International Series start and got straight into the fight, trading places with several competitors before settling into P10. Oriola pushed his #74 SEAT Leon in pursuit of P2 over the coming laps but couldn’t get close enough to make a move stick. The Lukoil Craft-Bamboo Racing trio kept their positions until lap seven when Nash could no longer hold off a charging S.Comini and dropped to P5. Oriola would also come under attack from Comini, putting him in P4 just before a safety car period began on lap eight. When the race restarted on lap 12, Nash was soon overtaken by T.Jager, despite his best efforts to protect his position. Nash did not have the speed to defend on the straights and neither did his teammate Oriola, who was overtaken by Jager on the next lap. With Oriola in P5, Nash in P6 and Lloyd in P11, the three Lukoil Craft-Bamboo cars had a few laps left before crossing the line, but another safety car period saw the race red flagged on lap 16, leaving the trio in that order and with championship points to take home for Oriola and Nash.

Nash and Oriola got off to a clean start in race two, keeping their P4 and P6 start positions respectively. Lloyd also got away cleanly but found himself locked in an immediate battle that forced him down to P13. Soon after the start, Nash was on the defensive and fending off Comini, while Oriola tried to take advantage of the situation and capitalize on their fight. The Spaniard managed to do just this on the third lap, after Comini had found his way past a little earlier. Oriola got alongside Nash and after a clean fight was able to claim P5 from his teammate. Oriola continued his march up the order, soon taking P4 from G.Morbidelli on the fourth lap. Lloyd had been busy fighting his way up the field and was in P11 attempting to pass M.Homola when the pair made slight contact. Lloyd collected himself and got back up to speed without missing a beat and got on with chasing down the competition. On lap nine, Nash was passed by Jager but the British driver fought back and was soon able to make a comeback and take P6 on lap 11. Oriola had been busy hunting down Comini and was reeling him in when his front-left tyre blew out and sent him off the track and into the gravel. Oriola managed to keep the car out of the barrier but the incident caused a safety car period and his subsequent retirement, forcing him to miss out on valuable championship points. The race restarted on lap 15 and by now Lloyd had done an impeccable job of carving his way up the field and into P7, slotting in just behind his teammate, Nash. With only two laps left at the restart, the remaining two Lukoil Craft-Bamboo drivers did their all to claim any final positions but didn’t have the time or the straight-line speed to make any challenges stick, and both finished the race firmly in the points with Nash in P6 and Lloyd in P7.

“I had a decent start in race one considering it was my first time in the car and I was doing ok until the safety car came out. Obviously, the team was struggling with straight-line speed, so when the cars were bunched up I lost a few positions towards the end on the restart but was happy to bring the car home in once piece.”

“We made a few changes to the car in race two, which helped. I got another decent start but got mixed up with a few cars in the beginning but then raced well for the rest of it and even made up some positions due to the safety car. I came home in seventh, which was a good result given how much we were struggling. Thanks to the team, it was great to show them what I could do over Friday and Saturday and hopefully our pace will be even better next weekend.”

“It was a great event at the Salzburgring. The show was amazing. The team was fantastic all weekend and to get the results we did was a big team effort. We still have work to do but I hope the tracks from now on will be better for the SEAT marque.”

“I was happy with the performance in qualifying and I thought pole was possible without the traffic. Race one was good, I kept the car in third position and I was attacking Homola in Sector 1 and 3 but sector 2 was just a straight and it was impossible to follow him. I think our job was well done but the cars in front are just too fast on the straight. In race two I had a very unfortunate puncture, thankfully I managed to use the handbrake and not crash the car into the wall, so I am happy for that. I look forward to the next round where it is going to be more suited to the SEAT, the championship is still long and we will keep fighting to the end.”

“We are disappointed to be unable to compete again this weekend in Salzburg due to the BOP and fast circuits. Lap time wise was fine but losing 3.5 tenths on the straight made racing impossible. All the drivers did very well, we expect to do very well in Budapest next weekend on a circuit that will finally suit our car and the BOP we have.”

“LUKOIL Craft-Bamboo Racing made a protest of the Opel and Alfa Romeo cars in Salzburg as we do not accept the conformity of their turbocharger, the technical regulations are clear and no waiver documents are available. We have appealed the decision of the stewards who had to act on the report of the technical delegate. This decision was taken in full consultation of our partners LUKOIL and SEAT sport.”

Craft-Bamboo Racing Determined to Return to the Podium in Thailand

Craft-Bamboo Racing is determined to return to the podium this weekend at the Chang International Circuit in Thailand. After a […]