Having some competitors being caught out due to the typhoon, the smaller grid did not mean less competition. The team and drivers were put to task with a wet Qualifying which saw the trio of Luca Engstler, Diego Moran and Mitchell Cheah setting the second, third and fourth fastest times of the day respectively. Just as the team was feeling good about the results, the stewards made a decision to cancel the times set by Moran for being over the track limits. “It was not the best decision but what can we do now. Diego must start Round 7 from 11th which we are all disappointed with, it would have been a great start for him in third” said Kurt Treml, Sport Director of LIQUI MOLY Team Engstler.

As it was, the week started out with a literal typhoon looming in the distance and talks of race cancellation were heard, but according to Treml, “fortunately Series organisers, Motorsport Asia made necessary schedule alterations and took extra precautions to ensure a safe race experience for us all”, but the issues did not stop there for the team.

Round 7 was held on a cool Sunday morning with Engstler starting front row, Cheah in third and Moran on 11th. Trouble began as the race started when Engstler came into contact with the pole sitter at turn one of the opening lap causing a rear axle to break and by the end of the race, he was running on three brake discs as one was completely shattered. Cheah was running well throughout the race when he suddenly felt a loss of power caused by a faulty turbo which cost him a top three finish. As for Moran, he managed a great start and as he was catching up to the leaders he made contact with another car, breaking his front damper.

“It was one of those days in the office. We were definitely kept very busy at the pit. After that we had a very short period to get the cars perfect again for the next race, so it was hectic” said Treml.

The afternoon’s race started on a wet track after the rain passed. Visibility was poor with huge trye mist and with the reverse grid order, all three drivers started in mid pack with Cheah starting in 7th, Engstler in 8th and Moran in 10th. The trio performed exceptionally, making great strides catching up to the front right from the beginning. From there, they race practically unchallenged and only fought for positions with one another finishing the race in a perfect 1-2-3 amongst the Championship contenders, the team’s first for the 2018 season.

“It was a perfect job by the drivers and the crew. We got our perfect result from a less than perfect weekend and in the end, it is all for the Championship and we are all really happy. It was tough but it was all definitely worth it” ended Treml.
Engstler now leads the Championship with 143 points, ahead of Cheah with 132 and Moran in fourth with 94, as they prepare for the final two races in Shanghai in the first week of October.

“The weekend for me was perfect. 55 from 55 possible points so in the end I think we can be quite happy” said a very contented Engstler after the race.

“In the dry conditions of course we dominated everything with our team, our cars were better than the others and the team did a perfect job. In the wet conditions we still have to learn a bit because the SEAT was a little bit faster than us but in the end we managed to hold him behind us. As I said 55 points and that makes us really happy and really proud. I have to say thank you to the mechanics, the team and everyone, they did a perfect job.

“The next race for TCR Asia is Shanghai but for now I have to focus on Germany again. We have two races to go which are really important for me because we have the Championship there and we are on P3 at the moment. Different car, different Championship and I am focusing on that. After that directly focus back on Asia and we will try to do our best in Shanghai”.

There were plenty to learn from at the races in Korea for the Malaysian, Cheah. “This race weekend has been a new learning curve for me. Sepang and Alex have been supportive of me since the beginning of the year and giving me this opportunity. This is the first time that Alex is here with me so throughout the whole race weekend we have been working a lot together, trying to improve and get the best out of me in terms of racing so, I’ve been progressing since the first day we were here in Korea.

“The outcome of the weekend wasn’t such a great one. The first race was due to technical difficulty but in the second race it was much better in the rain so I am happy to finish P2 on the podium again.

“For the next race in Shanghai, of course it is the last round in TCR Asia so I expect the best and to finish on a high for this season and of course to win the Championship”.

Once again, the Ecuadorian had a very mixed weekend. Luck was not on his side at the beginning but he managed to pull through to collect vital points to finish the weekend closer to the top of the leaderboard. “I had the speed and I was confident with the track and the car but things went bad for me when I got the penalty in qualifying which made me drop so many places and I had to start 11th in the first race. I had to push to try to recover some positions and that’s when I tried to pass one car who didn’t see me and crashed into me. I had to stop in the pits for repairs losing three laps.

“But in the second race I did a good race. I was a little bit too conservative at the beginning and as I gained more confidence with the car and the tyres, I recovered positions and I reached 3rd. The last lap my teammate and I were fighting and I almost passed him on the last lap corner but it was not enough.

“I am looking forward now to Shanghai because it is a track that I know and I was fast there last year. I hope I can recover points because this weekend was very bad for me in terms of points. Still 55 points to go. Anything can happen, what happened to me today can happen to the rest also, so nothing is lost until the chequered flag is waved. I am looking forward to Shanghai”.

Alex Yoong was on hand with the team for the weekend as a coach for Cheah and continues to be impressed by the 20-year old.

“It was a good weekend. The team had two race wins which is always fantastic. I was coaching Mitch so I was really specialising in looking after him and although the results weren’t so good, he learnt a lot, especially in race 2 in the wet. This is all experience and he will learn from it and come back stronger”.

TCR Asia will head to China for the final two rounds of the 2018 season held at Shanghai International Circuit. The event is scheduled for 4th to 5th October 2018 and will see the Championship being crowned there.

LIQUI MOLY Team Engstler are at the sprawling city of Yeongnam for Rounds 7 & 8 of the 2018 TCR Asia Series at the 5.1615km Hermann Tilke designed circuit with three Volkswagen Golf GTi TCR. Car #8 will be driven by Luca Engstler of Germany, car #29 driven by Mitchell Cheah of Malaysia and car #32 driven by Diego Moran of Ecuador. The team is supported by Liqui Moly, Remus, VW Motorsport, Pagid Racing, Drexler drivetrain, Motec rims, Recaro and Eibach. 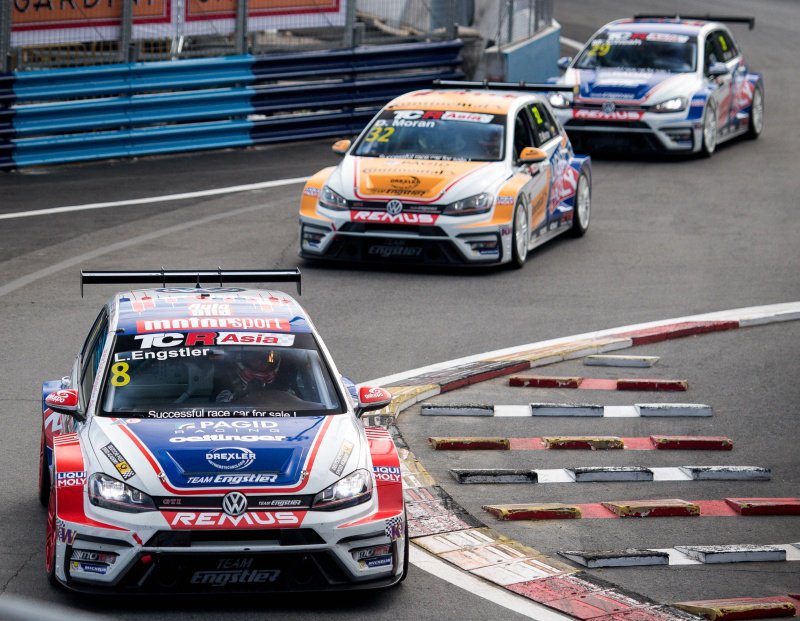 Craft-Bamboo Racing started the first race weekend of 2019 in style, with Alessio Picariello and Jeffrey Lee in the #88 […]