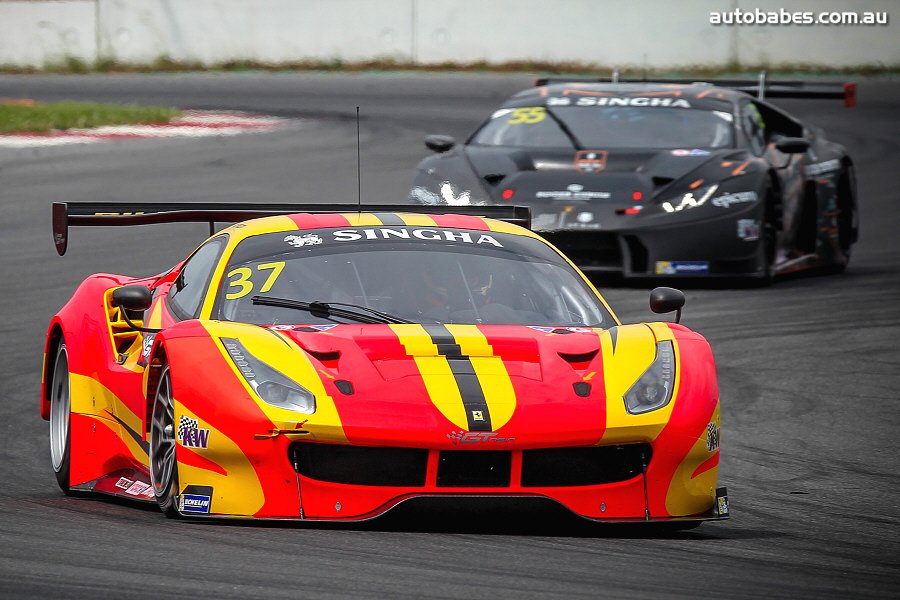 After a season that has seen some of the best GT racing anywhere in the world, the 2016 GT Asia Series will come to its dramatic conclusion later this week with the final two rounds of the championship contested over two 60-minute races at Shanghai International Circuit in China.

There’s just nine-points separating the top two teams with 36-points on offer across the two races, and whilst rising young Italian stars Edoardo Liberati and Andrea Amici lead the championship in their stunning black Roger Dubuis Lamborghini Huracan GT3, local heroes Anthony Liu and Davide Rizzo have every chance of turning the tables at their home circuit.

Across the 10-races that have so far made up the 2016 season, we’ve seen six different winning combinations, so should either of the top teams falter, there is no shortage of challengers who will take the fight into Thursday afternoon’s final race.

The Series coming down to the wire is not unusual for GT Asia, but in season 2016, the number of drivers capable of claiming the crown has dramatically increased – 11-drivers still in mathematical contention.

After a testing few weeks ahead of the conclusion to the 2016 Series, the final event has been forced to concede to a two-day, mid-week format, although nothing will change with the race length, the two final rounds contested across a 60-minute – compulsory pit stop – format, however unlike much of the current season, both races will be held on a single day, something which will have an impact on strategy with the title on the line.

“We’re really looking forward to the final event of the season – the ‘GT Asia Series Shang Peng Race of Shanghai’”, Motorsport Asia CEO David Sonenscher admitted. “The depth of competition in the Series this year is incredible – the best in our six-year history – effectively every car in the field is capable of the podium which makes the result completely unpredictable and that also means there’s no guarantee of who will claim the title this year.

“It’s great to have Shang Peng join the Series for the final too, and we look forward to providing them, their associates and our legions of fans live on network television and online around the world a race to remember – it will certainly be a fitting conclusion to the season.”

Teams will hit the Shanghai circuit for the first time on Wednesday morning (19 October) at 9:00am for the first of two 90-minute practice sessions, the second coming at 11:30am, before the two 15-minute qualifying sessions set the grid for the two races on Thursday, and whilst qualifying is important, in season 2016 the pole-sitter has won only three of the ten rounds contested, so it’s by no means a guarantee of a podium finish..

During the August event the pace-setters were Audi, with Phoenix Racing Asia’s Alex Yoong, Marchy Lee and Shaun Thong consistently at the top of the time sheets. Sadly for Lee and Thong a technical issue sidelined them early in opening qualifying forcing two rear of field starts, the duo though working their way from the back to positions inside the top five. Should they carry on that impressive form, they could well surprise the points leaders.

Bottom-line is that if you have the ability to watch this event unfold LIVE on FOX Sports Asia or Star TV, or LIVE online, make sure you do, these two races have the foundations to become the greatest GT Asia Series rounds ever contested..!

WHO TO WATCH OUT FOR;
If you can predict the race winners and ultimately the championship winners, you’d have to be in possession of a crystal ball because there is no guarantee that the two 60-minute races will provide a predictable result..

On points you could argue that the two FFF Racing Team by ACM Lamborghini drivers are in the box seat with their nine point championship lead, but that would be discounting some of the best teams in Asia.

The local BBT team are strong in Shanghai, and they’ll be ruing some difficult strategy decisions last time out that saw them leave Shanghai’s tenth round with a nine-point Series deficit – they’re a sharp operation though, and aided by the resources and knowledge of Ferrari’s AF Corse, they will be throwing everything they have at Liu and Rizzo to go after the crown.

That said, Marchy Lee and Shaun Thong and the three Bentley Team Absolute cars are all in contention for the crown, and all are having a strong finish to the season, so discount them at your peril..!

HOW TO FOLLOW SHANGHAI;
In fantastic news for the category, Fox Sports Asia will broadcast both races live to millions of viewers throughout the Asian region as the action unfolds and for those that miss it with mid-week commitments, they will replay both races in full on the Sunday immediately following the event (check http://tv.foxsportsasia.com/ for scheduled times). In China, Star Sports will also broadcast both races live, whilst China’s popular online network LeTv will also host both races live, the network one of 27-online platforms that saw the fifth event of the season at Shanghai broadcast to more than 6.3-million viewers across China.

Of course, both races will also be streamed live online through www.gtasiaseries.com

Hong Kong race driver Darryl O’Young will be making a return to the Porsche Carrera Cup Asia (PCCA), the first […]

CAMS Australian GT Championship 2 March, 2019 Melbourne’s Lee Partridge will make the debut of a lifetime at the Australian […]