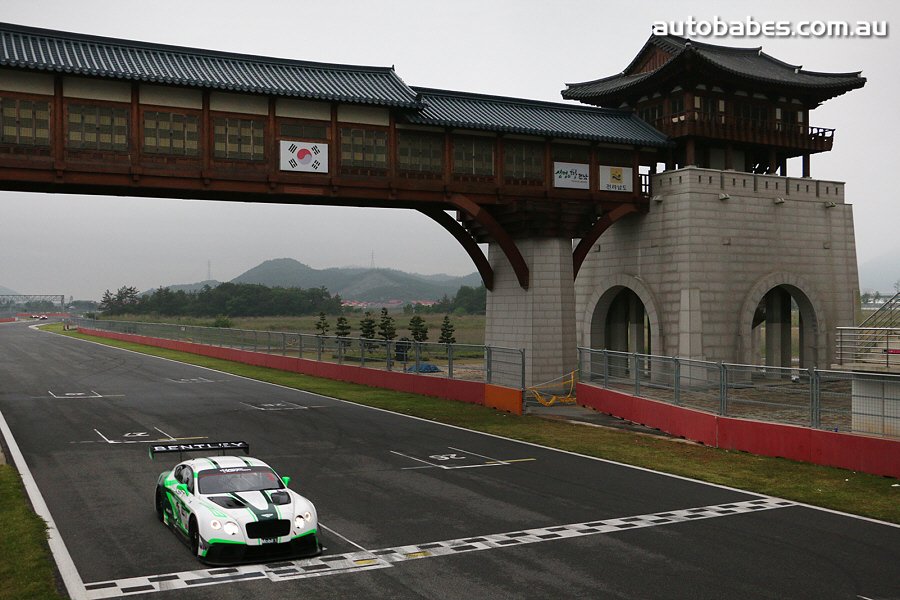 Day one of the official GT Asia Series pre-season test at Korea International Circuit saw teams presented with changeable conditions, ultimately robbing us of what could have been some impressive lap times. Sadly, day two dawned just as day one had finished, with persistent rain, although despite low light and cool temperatures, teams were able to collect some valuable data late in the day as a workable dry line started to appear.

As to what we really discovered about what the title protagonists were capable of, it’s difficult to say. Ultimately the three Absolute Team Bentley cars finished on top, with new recruit Jonathan Venter taking advantage of a new set of control Michelin slicks to top the timesheets a mere 27 one thousandths faster than team-mate Andrew Palmer, with Adderly Fong third.

The two-day program may have allowed teams to get some serious miles under their belts, however as it was an unofficial session with respect to the championship, teams were free to test and change things at their leisure, so some took the chance to run outside the limitations of the BoP [Balance of Performance], Franky Cheng’s opening day pace without the mandated restrictor a good indication of that (the part was caught in customs and wasn’t available on the opening day).

Naiyanobh ‘Toy’ Bhirombhakdi was a prime example, the Thai tin-top star having never driven a GT3 car prior to arriving at KIC, so he used the two days to good effect to acclimatise himself with the #91 VLT Porsche GT3-R he will share with reigning champion Darryl O’Young.

With weather predictions across the opening two races of the season suggesting one dry race and potentially one wet race, most teams ventured out at some point during the rain to record laps, the experienced Richard Lyons making the most of his maiden laps in the Craft-Bamboo Interush Porsche, ultimately topping the timesheets in the wet first session of day two, more than two seconds faster than the Venter/Sawa Bentley.

Third in the wet and fifth in the dry were Lamborghini Squadra Corse juniors Andrea Amici and Edo Liberati, the two Italians enjoying their experience behind the wheel of the FFF Racing Team by ACM Huracan, logging 118 laps across the two days.

The team that turned the most miles though was three-time champions Clearwater Racing who spent 122 laps getting the Series’ most successful ever driver – Mok Weng Sun – up to speed, whilst new team-mate Richie Wee also enjoyed his first laps in the new Ferrari 488 GT3.

“It’s different,” three-time champion Mok admitted. “It’s got a lot more grip than the 458 with much better aero, but we’re losing a lot of straight line speed at the moment, something the team will investigate before Friday, we’re down 13kph in a straight line on the 458, so we need to address that.”

Again the only GTC car to turn laps was Kantasak Kusiri who was mixing it with the GT3 cars during the wet sessions, the Singha Plan-B Motorsport Ferrari 458 Challenge car turning 72 laps across the two days to put the team in the box seat for top points for the opening round, rival Suttiluck Buncharoen not arriving at the circuit until Friday, whilst the GTM class Lamborghini of Dilantha Malagamuwa and Armaan Ebrahim also spent the two days in the garage.

For the 16-teams they now have two days to process the data they’ve recorded and work to make the most of that information ahead of the three official one hour practice sessions scheduled for the opening event of the season.

All the action from the 2016 GT Asia Series will play out ‘live’ on Fox Sports Asia, and online. Details of the streams and the broadcast times will be available on the GT Asia Series website – www.gtasiaseries.com – and through social media; www.facebook.com/GTAsiaSeries will also post news, video clips, images and updates, and you can also get involved in the conversation on www.twitter.com/GTAsiaSeries

The GT Asia Series is sanctioned by the FIA as an International Series and is clearly recognised as the Region’s leading GT Championship. It is solely managed and promoted by Motorsport Asia Ltd and is backed by Michelin, KW Automotive, Motul, Race Room, Panta, YOFC and Tunewear.

Wood and Major to front Interlloy Lamborghini at Phillip Island

Rnd#1 Australian GT Endurance Championship, Phillip Island, Victoria M-Motorsport (27-28 May, 2017) M-Motorsport heads into the opening round of the […]

Second for Hertner for Volkswagen Team Oettinger TCR Asia Round 5

Shanghai International Circuit was a good start for Roland Hertner, finishing second in Class at TCR Asia Round 5 but […]