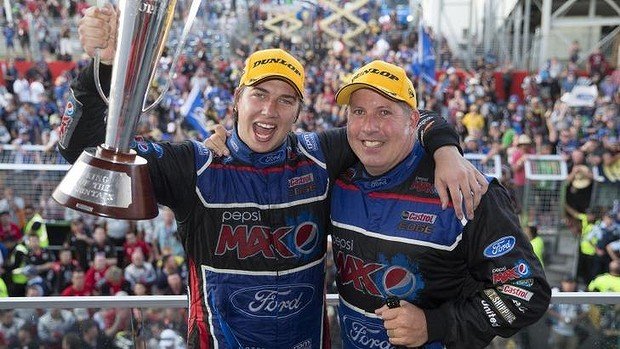 It was a fairy tale ending of Disney proportion, with the excitement and thrills of Spieldberg!

After starting from 25th position and leading only 1 lap, Chaz Mostert (and Paul Morris) have won an incredible Bathurst 1000 race at the Mount Panorama circuit for Ford Performance Racing !

In an unprecedented race that was suspended for road repairs for almost an hour and a half, FPR’s Mostert battled a duel in the final lap with then race leader Jamie Whincup’s Triple Eight Holden, taking lead when the miss-managed Holden ran out of fuel.

As expected, the race began with the Volvo of Scott McLaughlin taking lead from a third place start , exchanging places with Shane Van Gisbergen who dropped from first to third in the Tekno Autosports Holden. In second place was the Ford Performance Racing Falcon of Mark Winterbottom.

Controversy began early when the Triple Eight Holden of Jamie Whincup rocketed past several cars before the first corner. Under investigation it was deemed a legal start and that set the pace for Whincup who started from 23rd to end up at the other end of the lineup in the final laps – the front end!

The race was marred with several restarts when incidents called for the safety car. These included lap 26 with Luke Youlden in the Brad Jones Racing Holden missing the Chase to end up in gravel, lap 45 after a Kangaroo on track caused a safety hazard and an extension to the safety car period when Paul Morris crashed out whilst under the safety car, due to the track breaking up.

With most of the field moving into pits during the safety car periods, the Nissan took lead with the Ford of Dean Canto in second. It was at lap 62 that the officials decided to red flag the race due to the extensive deterioration of the track at both Griffins’ Bend and The Dipper. This of course was the cause of the race suspension lasting an hour and 20 minutes .

The race restarted just after 14:00 but the safety car returned when on lap 65 , Steven Johnson’s DJR Ford hit the wall whilst in lead.

The lead was then passed to another Ford team with Dean Canto in the Rod Nash Racing Ford ahead of Scott McLaughlin’s Volvo. Unfortunately, a further call was made for the safety car with further bad news for DJR when on lap 71, Scott Pye’s suspension failed causing him to crash out on Conrod Straight.

A series of lead changes ensued with further safety car restarts when LD Motorsport’s Russell Ingall seemed to lose track orientation and attempt a reckless inside overtake too close to the turn at Griffiths. Ingall had set himself on a certain collision path but it was unfortunate for Erebus’ Lee Holdsworth who was following his correct line and was on the brakes in the turn. When Ingall lost control of his Holden, he surged into the Mercedes spearing it into the wall and rolling it onto its roof. With the assistance of the marshals, Holdsworth was removed safely from the vehicle and taken to the medical center where he spent the rest of the afternoon.

With 12 laps to go, and the pit window closing, fuel efficiency was of the utmost importance. When Lucas Dumbrell crashed causing the 10th and final call to the safety car, the top 3 took the opportunity to pull into pits.

It was extremely heartbreaking to see Van Gisbergen do an extremely fast fuel up of 5litres only to stall his car on take off and then be unable to restart. For the driver who had worked so hard and who had pushed his car to the limit to hold position, it was extremely disappointing to have to deal with a faulty electrical system at that point. This gave Lowndes the opportunity to exit the pits ahead of Mostert who would now be in third place overall.

An exciting and fast paced next few laps saw the lead change a number of times when Whincup made an error in judgement at Hell Corner and allowed Winterbottom to take lead. In a controversial twist though, Winterbottom was spun around when he was pushed from behind by Craig Lowndes’ Holden at Murray’s corner, causing him to drop to 11th position. Lowndes was penalised with a pit drive through penalty and Winterbottom was able to courageously fight back to 6th position but the damage had been done and the lead prospect was no longer there for Winterbottom.

Whincup held the lead very strongly but fuel economy was a major concern for his pit management who had asked him to slow and conserve fuel. Their strategy was obviously an attempt to ensure a podium finish, however it seemed that Whincup may have been caught up in the adrenaline of a pole position finish and seemed to push the car harder. When he finally responded with the acknowledgement of `copy’, the car began to lose ground and the gap with Chaz Mostert in the FPR Falcon began to close.

Whincup, the five-times champion defended as best he could but the Ford of Mostert took the lead just before Conrod Straight to hold and claim a most sensational victory given that he started in the last position on the grid due to failing to qualify the day before.

It was at this time also that Mostert scored the race lap record of 2:07.49.

Meanwhile, Whincup fell back to fifth position to be passed by James Moffat and Taz Douglas’s Nissan for a second place, with Nick Percat and Oliver Gavin’s Holden in third.

Whincup’s official finish was 5th with championship rival Mark Winterbottom in one spot behind him in 6th.