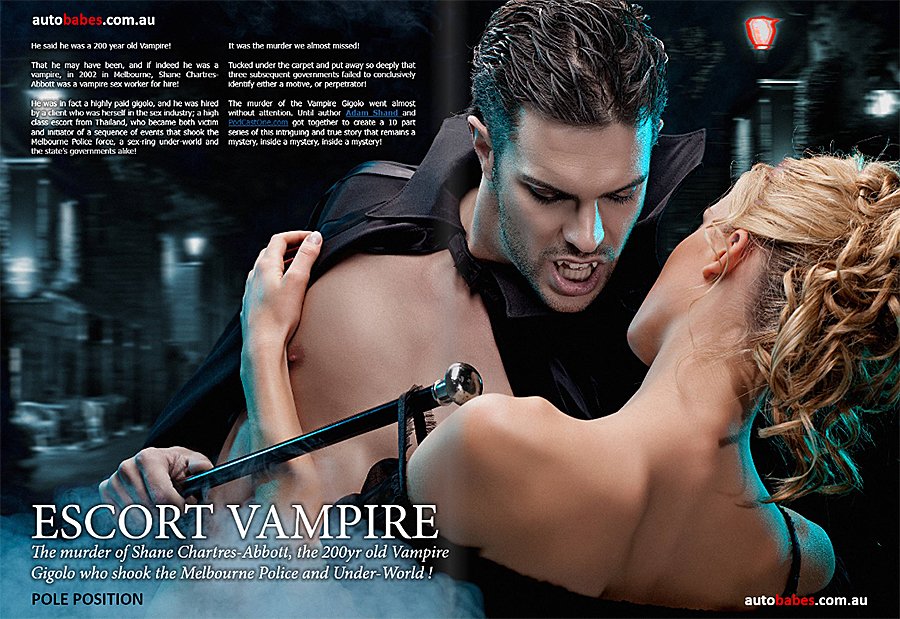 The Murder of Shane Chartres-Abbott, the 200yr old Vampire Gigolo who shook the Melbourne Police and Under-World

That he may have been, and if indeed he was a vampire, in 2002 in Melbourne, Shane Chartres-Abbott was a vampire sex worker for hire!

He was in fact a highly paid gigolo, and he was hired by a client who was herself in the sex industry; a high class escort from Thailand, who became both victim and initiator of a sequence of events that shook the Melbourne Police force, a sex-ring under-world and the state’s governments alike!
It was the murder we almost missed!

Tucked under the carpet and put away so deeply that three subsequent governments failed to conclusively identify either a motive, or perpetrator!

Grant Tothill, Head of Podcasting at SCA announced late in August, that all ten episodes of PodcastOne’s original True Crime series; “The Trials of the Vampire”, created with journalist and writer, Adam Shand, are available exclusively on PodcastOne.com.au and the PodcastOne app.

The Trials of The Vampire podcast delves into a complex and intriguing Melbourne case where a male prostitute is accused of raping and mutilating a client.

Few doubt his guilt and to complete the lurid picture, she says her attacker boasted that he was a 200 year old vampire !

However the gigolo himself, Shane Chartres-Abbott, said that he was framed and then set out to prove he was the fall guy for a high-level sex ring operating in the city.

Although not knowing that others were plotting his death, Shane did fear that he would be silenced before he could tell his story.

The interesting thing is that the victim herself, was hiding a complex and volatile past relationship from police.

On June 4 2003, Shane was murdered on the way to his own trial where was to give evidence in court.

Adding further to the already strange twist, three years later, a career criminal already incarcerated in jail, confessed to the crime saying he was the `slayer of the vampire’, and made a series of sensational allegations.

He tells the court that serving and past police were involved in the murder and beyond.

He says the police provided him with the victim’s address as well as an alibi for the shooting!

The case ceases to be a murder investigation and turns into a purge of links between Victoria Police and the underworld.

Operation Briars was commissioned by the Melbourne police, to investigate which officials were involved.

It would become the most expensive investigation in the state’s history and the blood of the vampire gigolo would wash through the halls of power for years to come.

The court had heard that Chartres-Abbot had been accused of violently raping his female client, biting off her tongue and leaving her unconscious in a hotel room.

It also heard that the victim reported he had told her he was a 200-year-old vampire who needed blood to survive.

Prior to testifying, Chartres-Abott had reported his innocence in a statement to police.

He went further to say that in fact he fled the room when the woman told him that there were men planning to film a pornographic movie that would end with his death – this type of film later became known as a `Snuff Film’ and the on film victim doesn’t always know they are being filmed and never that they will die at the end.

In 2012, The Daily Mail reported that the `Vampire Slayer’ had been dismissed and that a new suspect, 40-year-old Warren Thomas Shea, had been charged with the Chartres-Abbott murder.

Investigators said that Shea is an associate of Mark Adrian Perry, who police believe had ordered the killing.

Perry was thought to be close with the woman allegedly raped by Chartres-Abbott and in fact had a romantic relationship at the time. A viable motive was offered for the first time.

Perry disappeared in 2009 however, with police reporting that he went into hiding in Thailand.

In the end though, nothing was proven.

Perhaps with the exception that this was an extremely well masterminded killing by professionals that had a lot to hide from police and the public.

Today there remains a lingering sense of a justice denied.

More so infact, that a killer and their accomplices remain free and without punishment.

What we do know of Shane, is that he was born in Brisbane to mum Nancy and dad William, who was nearly 60 at the time.

William also is known to have had 10 children with 3 women. He ran an `introduction agency’ in Brisbane that some said was actually a brothel.

Announcing The Trials of The Vampire, Grant Tothill said,

“As we know from the success of American podcasts Serial  and S-Town and the high level of engagement with Australian True Crime podcasts released over the last 12 months, listeners have an appetite for true crime stories.

The long narrative form style of podcasting gives journalists and authors like Adam Shand the ability to really get into a style of story telling not found with print, TV or even books and allows them to take people on a journey in a compelling and exciting way.”

“The Trials of the Vampire was an opportunity to explore the extraordinary potential of the  podcast medium to bring crime stories to life with all their colour, intrigue and grit.”

“In making the series, PodcastOne gave me an open palette to combine storytelling elements from the different media I have worked in.”

“I could create a story in a manner that had no limitations,”