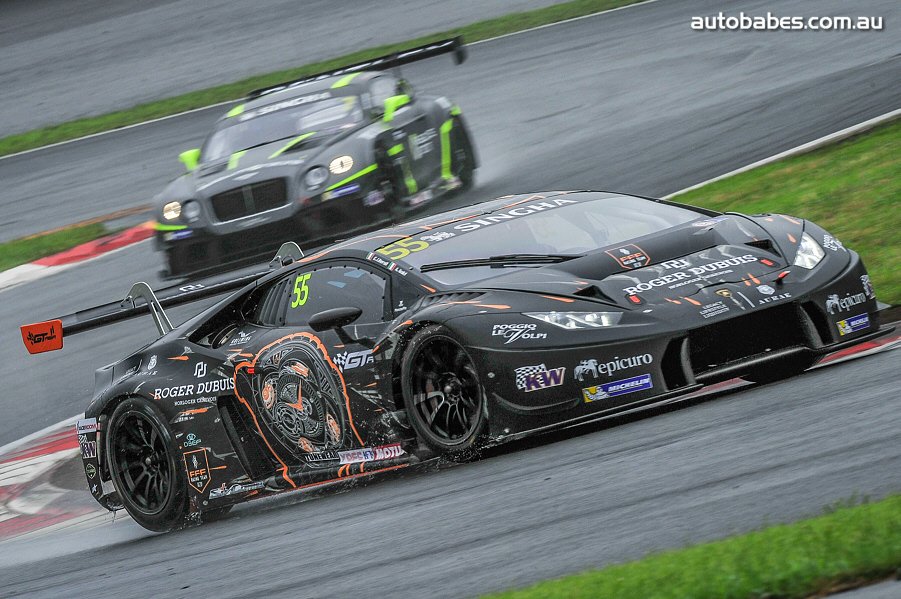 The GT Asia Series arrives at the Shanghai Formula One circuit in China for the penultimate event of the 2016 season, a season which has already delivered some incredible racing, but as always, Shanghai is preparing to step things up to a whole new level with a title fight on the line, and the addition of some seriously talented entries.

Just days ago Mercedes-AMG announced they would make an all-out assault on the Shanghai round, with the addition of two new Mercedes-AMG GT3s, whilst points leaders FFF Racing Team by ACM had an announcement of their own, adding a second Huracan GT3 for Lamborghini Squadra Corse drivers Jeroen Mul and Richard Antinucci

They aren’t the only ones either, 2014 podium place-getters Zhang Dasheng and Li Chao will make a welcome return, joining Tim Sugden and Jono Lester in the GruppeM Racing team in a second Porsche GT3 R, whilst Lin Yu and Jun San Chen will share a Lamborghini Super Trofeo in the GTM category, run under the same AAI banner as the two Merecedes-AMG GT3s.

The new teams will be looking to ‘shake things up’ because they’re not in championship contention, but don’t discount the title contenders, any and all points will contribute to the overall standings as they head towards the final event of the season, so they’re not going to just lay down and let the new teams dictate, it will be all out war!

Leading the charge for the established teams is FFF Racing duo Edoardo Liberati and Andrea Amici, the two Lamborghini junior drivers took their maiden win of the season last time out in Fuji to take the championship lead by just nine points from the BBT Ferrari pairing of Anthony Liu and Davide Rizzo – but now the Lamborghini drivers are in Anthony Liu’s back yard!

Two years ago – during their maiden season in GT Asia – Liu and Rizzo set pole position for both legs of the first ever Shanghai event for the successful Asian championship, out-qualifying all challengers to go on and win the opening race. During the second race of 2014, they came up against the debut of the mighty Bentley Continental GT3 – which since then has been one of the most successful marques in the Series – and lost out after contact battling into the final turn. That contact effectively cost them the championship, Liu going on to finish second in the driver’s championship, just five points behind Clearwater Racing’s Mok Weng Sun.

12-months ago the BBT duo were back in action at Shanghai, finishing second in race two, so they know the circuit and are looking to get back into the championship fight, although they may have to contend with the two Lamborghinis of another local – FFF team-boss Sean Fu – in order to do so.

The 2016 GT Asia Series has been such a tight affair this season, that any slip by the leaders could result in a vastly different point-score on Sunday evening. Team Bentley Absolute have won three of the eight races so far in season 2016, and they’ll be hoping that the Lamborghini and Ferrari battle will allow them to move through to claim the top spot, especially as Adderly Fong and Andrew Kim sit just 10-points back from Liu and Rizzo in the championship – but the Bentley duo have their own battle to contest.

Former Series regular Marchy Lee arrived at the opening round in South Korea with one of the most impressive operations anywhere in the world of GT3 racing, after agreeing terms with German powerhouse Phoenix Racing to form Phoenix Racing Asia, and in just their maiden season, Lee and team-mate Shaun Thong have gone on to claim two wins (Thailand and Okayama) to share third place in the points with Fong and Kim.

Both teams are expected to challenge at the front of the field, and Fong especially is race-ready, the Hong Kong-based driver having come off back-to-back podium finishes at Utah in the USA last weekend in his Bentley Continental GT3, so he is ready for a fight..

So too Keita Sawa and Jonathan Venter, the Bentley duo dominated the opening round of the season with back-to-back wins in South Korea, but since that point have suffered a string of DNFs which have dropped them well back in the points, their only chance to get back into the title fight comes by battling for the top points and they both well understand that. Last time out in Fuji they finished second to the Lamborghini so are mounting a recovery and have every chance of claiming the top step, especially considering Sawa is a former race winner at Shanghai (2014).

Three years ago AMG made a one-off appearance in that year’s GT Asia Series, campaigning two SLS AMG GT3s at Zhuhai, one of which was driven by three-time Formula One world champion Mika Hakkinen and a rising young teenage star from Hong Kong, Matt Solomon..

It’s in the history books now, but the duo claimed the win on their maiden attempt after a desperate last lap pass for the lead by then 17-year old Solomon who returns to the fold this weekend as one of four drivers for the AAI-supported AMG Customer Racing team.

Joining Solomon in the #66 car will be another rising young star, Germany’s Nico Bastian who has done a lot of miles in the new AMG GT3, whilst Solomon’s 2013 mentor Hakkinen will also make an appearance at Shanghai, although due to his elite driver ranking, and Solomon’s subsequent leap up the rankings in recent years, he’s unable to drive. Always popular with the Chinese fans, Hakkinen will be at Shanghai for AMG, and the organisers have tasked the Finn with waving the chequered flag for the two GT Asia Series races.

As for the second car, it too will have an impressive lineup with the new ‘King of Macau’ Maro Engel (2014-2015 winner on the Guia Circuit) joining emerging Chinese star Zhang Wenhe in the #68 entry. Engel is expected to push the new car to the limit, the former DTM star and factory AMG favourite is widely regarded as one of the best GT3 drivers in the world, whilst Solomon has already taken the new car to victory in Australia earlier in the year.

You could be forgiven for thinking these teams would provide more than enough ingredients for what will be the biggest and best race of the season, but that’s without taking into consideration the most experienced team in GT Asia – Craft-Bamboo Racing.. The 2015 driver’s champions made a marque change last year from Aston Martin to Porsche, and since the opening round have been on an aggressive development curve, and that curve delivered great results at Fuji with team-leader Frank Yu and experienced Asian GT3 star Richard Lyons claiming a pair of podium finishes.

12-months ago Shanghai was all about Craft-Bamboo with Series champion Darryl O’Young and English team-mate Daniel Lloyd claiming victory in both 50-minute races, whilst Lyons holds an unbeaten record at Shanghai for the category as the outright lap record holder for both qualifying (1:46.985) and the race (1:47.107). With the new Porsche GT3 R now sorted, you couldn’t discount Craft-Bamboo continuing that winning streak this weekend.

As for the second of the teams campaigning the new Type 991 Porsche GT3 R – GruppeM Racing, they’ve already been on the 2016 Series podium with Englishman Tim Sudgen and rapid New Zealander Jono Lester. Lester stood down at Okayama for team-leader Philip Ma, but he’s back in for this weekend and desperate to prove he is still one of the best GT3 drivers in the Pan-Asian region by taking the new team to another podium, and if the stars align, the first win of the year for Porsche could fall their way..

Throw in a couple more stars – former F1 driver Alex Yoong, and Chinese motorsport hero Franky Cheng – both in identical Audi R8 LMS GT3s, and opening race Fuji winners Carlo Van Dam and Piti Bhirombhakdi in their Singha Motorsport Ferrari 458 and you have the perfect recipe for an event which will keep you captivated across both 60-minute races..!

WHO TO WATCH OUT FOR;
Where do we start.. This year it has been a challenge to predict who will make a GT Asia podium, but the addition of some seriously talented drivers, some impressive new equipment and an A-list of current drivers who are right in the title battle suggests it would be easier to predict the lottery numbers..!

If this season has shown anything, it’s that any number of the teams entered have a chance to claim a podium finish, and with the title on the line ahead of the final round, this weekend could provide plenty of fireworks.. if you need a prediction you’re not going to get it, but if you need some sage advice.. don’t miss this one, it’s going to be memorable!

HOW TO FOLLOW SHANGHAI;
This season Fox Sports Asia and Star Sports in China will also broadcast every event of the GT Asia Series live (race two in full, with highlights from the opening race), whilst the series itself will also live-stream every round with experienced commentators Jonathan Green – the voice of GT Asia – joined by Steve Martin to call both live television and live streaming action as it unfolds.

GT ASIA AND SHANGHAI INTERNATIONAL CIRCUIT
2016 will see the third visit by the GT Asia Series to the Chinese Formula One venue. During the Series’ first visit, local stars Anthony Liu and Davide Rizzo claimed pole position for both races and the first ever victory at the 5.5-kilometre venue. For the second race the local Ferrari stars were in the mix again, but contact with the debuting Absolute Racing Bentley ended their run at the front, allowing Clearwater Racing’s Mok Weng Sun and Keita Sawa to claim a victory which would all but seal Mok’s third championship crown.

Last year Liu and Rizzo claimed second in race two at Shanghai, but again they were right in the mix, but it was Craft-Bamboo Racing’s Darryl O’Young and Daniel Lloyd who claimed back-to-back wins.. the interesting point being that the Shanghai winners on Sunday in both 2014 and last year have both gone on to claim the championship crown.. an ominous sign perhaps!!

There is one difference in 2016 however, for the first time the Series will use the full 5.453-kilometre Grand Prix circuit unlike the shorter version (which eliminates turns 5 and 6) used in 2014 and 2015

The GT Asia Series is sanctioned by the FIA as an International Series and is clearly recognised as the Region’s leading GT Championship. It is solely managed and promoted by Motorsport Asia Ltd and is backed by Singha, Michelin, KW Automotive, Motul, Race Room, Panta, YOFC and Tunewear.

After some outstanding racing across the 2019 season of Australian GT, the championship comes to its conclusion at Melbourne’s Sandown […]