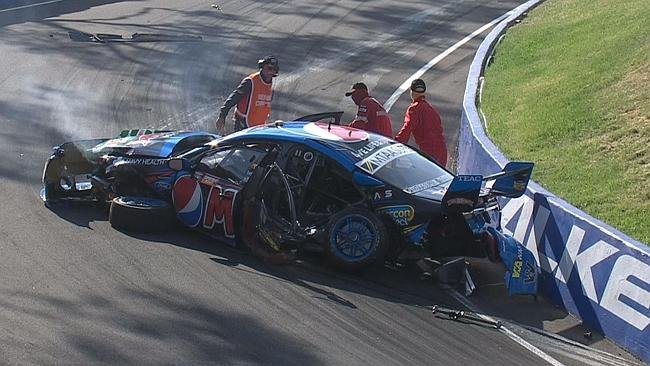 Reigning Bathurst champion Chaz Mostert has crashed out of practice during Bathurst 1000 qualifying with a fractured left femur.

The V8 Supercars champ bounced off the walls as he reached the Forrest’s Elbow section of Mount Panorama just minutes into practice for Sunday’s Great Race.

Unfortunately, four officials have also sustained minor injuries and a fifth has been been taken to hospital in a more serious, but stable condition.

‘Our number one priority is the safety of our drivers and officials. Our thoughts are with Chaz and his family and the marshals who do an incredible job,’ V8 Supercars CEO James Warburton said.

‘I’d like to thank the specialist emergency response teams and medical staff at the circuit.’

The 23-year old had been the bookies’ favorite to claim pole in his Bathurst title defense.

As a result, qualifying had been postponed until Saturday.

‘First of all, we hope Chaz is alright. He’s got to get back on the horse, but it’s a pretty powerful horse,’ two-time Bathurst champion Russell Ingall told the Seven Network.

Holden veteran and Bathurst crowd favorite Craig Lowndes has won his sixth Bathurst 1000 title at Mount Panorama this afternoon. In […]

As the annual battle for the mountain approaches, which is the pinnacle race for the V8 Supercar series at Mount Panorama […]