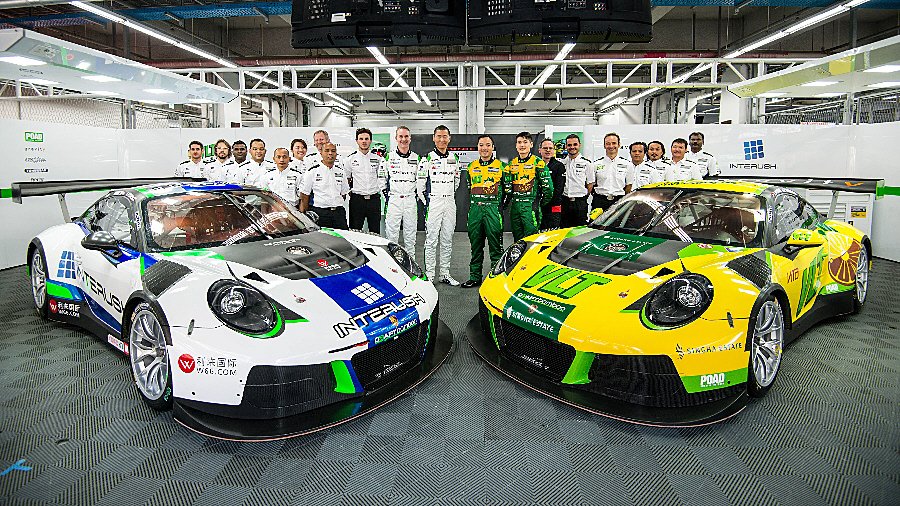 Craft-Bamboo Racing, Porsche’s Official Technical Partner Team in Asia, will contest the inaugural Blancpain GT Series Asia in 2017 with a three Porsche entry. For the first time, the team will compete in both the GT3 and GT4 classes simultaneously, fielding two Porsche 911 GT3 R’s in the GT3 class in addition to a single Porsche Cayman GT4 Clubsport MR. This exciting mix will offer Craft-Bamboo Racing the opportunity to claim both the drivers’ and teams’ championship titles in both categories.

After Craft-Bamboo Racing’s first season of competition in the Porsche 911 GT3 R, the team has gained tremendous experience with the car coupled with further development during the off-season. The Hong Kong team expects the Porsche to make significant strides in its performance and the crew has every confidence that they will arrive with a competitive package come the first race in Sepang. Craft-Bamboo Racing is one of the most experienced GT teams in Asia, taking victories and podiums at many of the circuits that will be contested this year. With their strong history of success in Asia and two fresh Porsche 911 GT3 Rs with brand new engines and chassis, the team is set to take the fight to the best GT3 teams and drivers, assured that they will deliver peak performance when the lights go out. Extensive development time has also been devoted to the switch to Pirelli tyres, with the crew focused on preparation to ensure that both their GT3 and GT4 class machines are primed for action on the 8th of April. The team is focusing on finalizing a high claibre driver lineup for their two GT3 Rs and is excited to announce them in the coming weeks alongside fresh livery designs for both cars.

Driving the #77 Porsche Cayman GT4 Clubsport MR for 2017 will be Hong Kong’s Frank Yu and Jean-Marc Merlin of France. Frank makes the move to the GT4 class in pursuit of the championship title, giving Craft-Bamboo Racing its first foray into the new category.

Frank Yu began his racing career in 2007 and has been continuously developing his race-craft over the past 10 years. Some of his greatest achievements include winning the Malaysian Super Series Championship title in 2012 and taking P3 overall at the Dubai 24 hours in 2013. Yu is best known for his GT Asia title challenges over the last few years in both Aston Martin and Porsche machinery and most recently took P3 once again at the Dubai 24 Hours in the Cayman GT4 Clubsport MR. His extensive knowledge of the Asian race circuits and vast experience in the GT3 class will make Frank Yu a tough competitor this season.

Jean-Marc Merlin is no stranger to Craft-Bamboo Racing, having raced with the team at the Bathurst 12 Hour in 2015. Merlin has a strong history with Porsche Motorsport as well, having competed in the Porsche Carrera Cup Asia and the 24 Hours of Le Mans in a Porsche 911 RSR. The Frenchman has also piloted numerous early 911s, including 2.0 litres, 3.0 litre RS’s, 935’s and 962’s in European historic events. Merlin has recently been competing in the prototype category in the World Endurance Championship and European Le Mans Series but a move to Asia sees the Blancpain GT Series Asia a perfect fit for the Singapore based driver.

With the combined track record of success between them and aided by the new Porsche Cayman GT4 Clubsport MR, Frank and Jean-Marc are shaping up to be one of the strongest pairings in the GT4 class for the 2017 season. The GT4 entry will be further supported by the team’s pair of Porsche 911 GT3 Rs, staking Craft-Bamboo Racing’s serious intent to challenge for both championships from the very start of the inaugural Blancpain GT Series Asia race in Malaysia.

“We are pleased to announce Craft-Bamboo Racing’s move to the Blancpain GT Series Asia as it gives us the opportunity to run cars in the GT3 and GT4 classes. Porsche Motorsport has worked hard on the development of both cars over the past year and we have high expectations for the coming season. With the cars fully prepared we will be announcing our high-calibre GT3 driver lineup over the coming weeks. Our lineup of Frank Yu and Jean-Marc Merlin in the Porsche Cayman GT4 Clubsport MR should prove to be very strong as the pair are hugely experienced with the manufacturer as well as with top level international racing. With our soon to be revealed GT3 driver lineups we will be aiming to take not only the GT3 title but also the GT4 championship this year as well.”

“We are happy to see Craft-Bamboo Racing choose Porsche vehicles for their entries in both the GT3 and GT4 Class in the Blancpain GT Series Asia. This once again shows the unique role Porsche Motorsport plays in helping to develop Asian Motorsport. Porsche Motorsport is also proud to support these three entries by providing engineering, technical and parts support.”

“I am very excited to join the Blancpain GT Series Asia this year in the GT4 class. I think the GT4 category will become a great success and it is a perfect platform for Bronze drivers. I have a lot of faith in this series and I believe we will put forth a very competitive package that should give us a shot at the championship. I really liked driving the Porsche Cayman GT4 Clubsport MR after taking a podium finish in the 24 Hours of Dubai earlier this year. I am glad to be back racing with Jean-Marc Merlin, with whom I have teamed up with a number of times in endurance events. We both have driven Porsches in the past and can’t wait to take on the rest of the GT4 field come early April.”

“I am really looking forward to racing once again with Craft-Bamboo Racing and Frank Yu. We will be taking the competition very seriously but we aim to have fun while doing so. I have wanted to compete in the Blancpain GT Series for a long time and I am happy to be participating in what is promising to be a very successful Asian series. I will be making the move back to Porsches again after having competed in the PCCA and 24 Hours of Le Mans as well as many historic races. The biggest challenge for me will be forgetting prototype race techniques after competing in WEC and ELMS in LMP2 and LMP3 Ligiers.”

This past weekend, the Formula Haier was displayed at the IFA Show in Berlin. The IFA show is the world’s […]

Lukoil Craft-Bamboo Racing endured a tough weekend in Buriram, Thailand, but put in a strong performance to score some championship […]