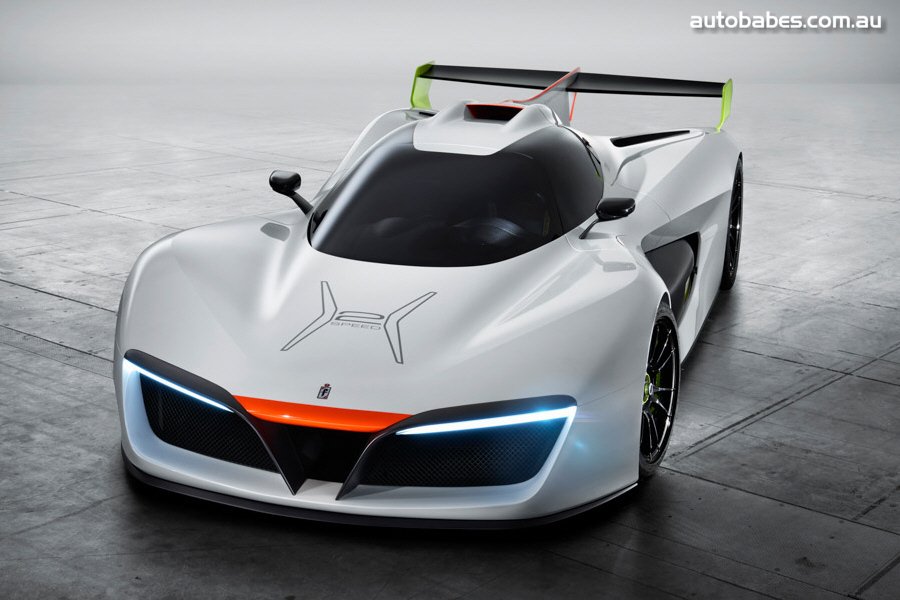 Extraordinary performance, sportiness and pure, environmentally responsible driving fun. Its name is H2 Speed and it is Pininfarina’s innovative vision of a high performance track car based on revolutionary hydrogen fuel cell technology already subjected to severe track testing by GreenGT, a Franco-Swiss company which has been designing, developing and producing clean, sustainable propulsion systems since 2008.

H2 Speed will appeal to passionate people who love speed, performance and innovation and, at the same time, are attracted by the exclusivity typical of a Pininfarina-designed vehicle produced in a limited series. Halfway between a racing prototype and a production supercar, the H2 Speed is the world’s first hydrogen, high performance car. It is not by coincidence that its name joins together H2, the formula for gaseous hydrogen, and the English word Speed, as if to say that it is the force and energy of Nature that generate the vehicle’s high performance, fostering the excitement that is typical of passion and sport.

Seduced by GreenGT technology, Pininfarina has applied its mastery to express a style that communicates uncompromising beauty and a unique allure, combined with extreme performance. A pure beautiful form, free of any stylistic affectation.

Sculpted by efficiency-boosting aerodynamics, the H2 Speed weds blistering performance to refined lines and shapes integrated in a form of strong emotional impact which embraces the driver and represents the best possible expression of Pininfarina DNA: purity, elegance, innovation expressed through the passion that has always pervaded the world of high performance cars.

Global styling benchmark for 86 years, Pininfarina has always invested in research and development programmes to propose concepts and innovative solutions to the new challenges that continue to arise in the car industry. One of the main areas was that related to performance and to aerodynamic and technological innovation for racing, as seen in the Lancia Aprilia Aerodinamica of 1937, the Fiat Abarth Monoposto Pininfarina Record of 1960, the Dino 206 Competizione of 1967, the Lancia Beta Montecarlo Turbo Gruppo 5 of 1978. In this context, however, the most striking example was the Sigma Grand Prix of 1969, which reinterpreted and renewed the Formula 1 concept by introducing major safety content geared to drastically reducing the risk component inherent in car racing.

Starting from these examples, in a scenario of great attention to the most sensitive aspects of sustainability and emissions reduction, Pininfarina today proposes a new interpretation of its passion for motor car performance in an innovative and totally ecological key.

For this new styling and research exercise, it has used the hydrogen fuel cell technology developed by its partner GreenGT.

The technology presented by GreenGT is the substantial outcome of a two-year development and testing programme that has embodied the form of the H2 Speed concept. GreenGT proposes ‘Full Hydrogen Power’ technology, a powerful electric-hydrogen fuel cell drive chain. The result is a zero emissions vehicle able to reach 300 km/h by releasing just water vapor into the atmosphere. With a maximum power of 503 horsepower, the engine accelerates from 0 to 100 km/h in 3.4 seconds. Also notable is the rapid refueling, unknown to traditional electric cars: a full tank of hydrogen can be done in only 3 minutes.

H2 Speed eliminates both air and noise pollution. The compressor gives the vehicle’s engine a very special tone, completely different to that of conventional electric cars. So even the noise made by the car is close to the emotion of silence, sounds and hisses that evokes science fiction.

Form and function merge together in the H2 Speed concept to create an external design that highlights the vehicle’s sportiness and performance in every detail. Lines and volumes outline a sculpture that is as powerful as it is intriguing. Although it is based on the traditional styling cues of sports cars (low, aggressive proportions, strong design and an emotional synergy between car and driver), the H2 Speed presents the designer with a two-fold challenge: to design a car on a carbon frame and on the mechanical layout of a high performance car of extreme proportions (length 4700, height 1087, width 2000, wheelbase 2900) and at the same time clothe the GreenGT Full Power Hydrogen system, an innovative technology that offers, in terms of vehicle architecture, the necessary originality to generate a unique, outstanding product.

The H2 Speed was born for high performance. Under the banner of essentiality and rationality, all parts of the layout have been designed for the correct distribution of weights to be able to transfer the power and enormous torque of the Full Power Hydrogen system to the ground.

The sinuously three-dimensional shape springs naturally from an original styling process where the most important constraint – the two large hydrogen tanks at the side – becomes an opportunity. To avoid weighing down the side of the vehicle, the hydrogen cylinders are faired instead of being incorporated into the body volume but they remain visible through a window in the rear part of the fairing where the fuel cap is easy to access.

Arising from the marked sidecut, the three-dimensionality can be seen clearly in the plan lines of the vehicle. The geometric composition of the design from above is particularly intriguing: the car seems to consist of two triangular bodies that intersect to generate the front and rear mudguards. And it is the compenetration of this two volumes that defines the features of the plan, side and perspective views, playing seemingly on a symmetrical drawing. The crests of the mudguards do not follow wing volume in a traditional way but enter and exit the body, giving sensuality and originality to the handling of the surfaces.

Modelling the side panel makes it possible to hollow out a generous air passage from front to side. The result is an efficient aerodynamic flow and, at the same time, the creation of three-dimensional hollowed out volumes that leave part of the carbon frame visible as well as mechanical parts like the suspension arms. At the entrance to these channels, the two big front radiators located laterally, cool the entire fuel cell block.

At the front, between the two radiators, a center duct permits the flow of fresh air which, channelled along the sides of the cabin, cools the engine compartment. The muzzle presents two upside-down L-shaped wings which direct the aerodynamic flows and also act as supports for the lighting system: the apparently suspended led strips give the front an attractively original, dynamic expression.

The volume of the cabin is a transparent, tapered, aerodynamic drop shape characterised by a body-coloured band extending over the windshield. Its two ribs integrate roll bar volumes and house an air intake that feeds the compressor intercoolers.

The cut-off rear volume is cleanly detached from the flows and is characterized by sloping mudguard volumes; playing with the sidecut in plan view, the mudguards confer its original shape on the tail volume, directly deriving from technical and aerodynamic needs.

At the centre of the transom a fine, horizontal lighting strip, elegant and basic, integrates lighting functions typical of high performance cars.

The choice of body colour is inspired by the Sigma Grand Prix and gives it a modern interpretation with a plain pearlescent shade of white. As in the Sigma, the addition of fluorescent touches in vermilion and acid yellow highlight the functional areas: the aerodynamic tip of the front, the aerodynamic scoop, the edge of the centre fin, the spoiler fins, the windows that leave the side hydrogen tanks visible, as well as the technical details on the wheel hubs and the brake calipers. Again inspired by the Sigma and racing cars in general, the safety controls and lights/transmitters and the hydrogen filler cap are highlighted in a purely functionalist way. The great functional and technical surfaces (front wings, tank bodies, spoiler, extractor and all the car’s aerodynamic features) are in anthracite grey.

The H2 Speed logo and graphics are a modern tribute to the styling of the Sigma Grand Prix and as in that iconic car of ’69, the presence on the sides of the Swiss flag, associated here with that of Italy, represents a symbolic celebration of the renewed alliance between a Swiss company (GreenGT) and Pininfarina.

Mahindra and Pininfarina may join to create Hybrid SuperCar

Mahindra Group chairman, Anand Mahindra, told MarketWatch today that there were talks underway for a potential joint venture on an Electric […]