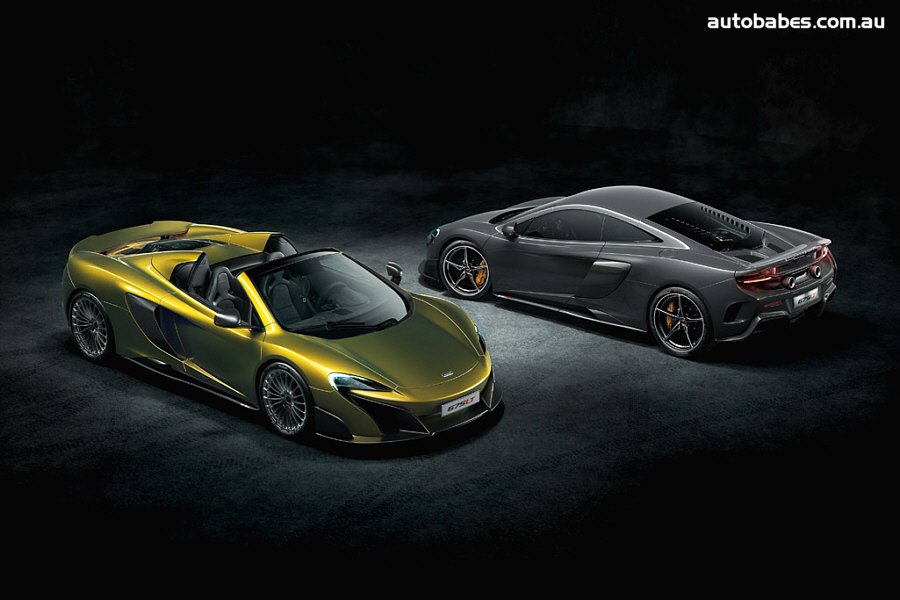 McLaren Automotive has revealed the latest chapter in the history of the iconic ‘Longtail’ name with confirmation of the 675LT Spider. Strictly limited to only 500 examples worldwide, it is only the second model to wear the LT badge. This latest model comes less than a year since the first model in nearly 20 years resurrected the name, and is in response to significant customer demand. The 675LT Coupé focused on light weight, enhanced aerodynamics, increased power and track-focused dynamics, and this limited-run model quickly sold out before the first deliveries commenced. Sharing these key characteristics, McLaren Automotive now presents the most focused, fastest and exhilarating open top model to ever wear a McLaren badge.

The 675LT Spider, priced at £285,450, is the fifth new model debuted by McLaren Automotive in 2015 in what has become a defining year for the British brand. This latest model joins the McLaren P1 GTR, 570S Coupé and 540C Coupé, and the fixed-head 675LT Coupé as new to the line-up, and further strengthens the Super Series range.

Under the skin of the 675LT Spider sits the heavily revised 3.8-litre twin turbo V8 powertrain from the coupé sibling, ensuring performance figures are worthy of the LT – or ‘Longtail’ – badge. The power output and torque figures remain unchanged, with 675PS (666bhp) delivered at 7,100rpm and 700Nm (516lb ft) available between 5,000-6,500rpm. The changes to the powertrain saw more than 50 percent of the components replaced to ensure optimised levels of power, torque and drivability. These include new, more efficient turbos, detail design changes to the cylinder heads and exhaust manifolds, new camshaft and lightweight connecting rods, and a faster-flowing fuel pump and delivery system.

Acceleration from 0-100kmh (0-62mph) takes just 2.9 seconds, and 200kmh (124mph) is achieved in 8.1 seconds – giving away only 0.2 seconds to the more aerodynamically optimised and lighter coupé. Controlled torque delivery in first gear manages torque to 600Nm (443lb ft) to ensure maximum acceleration, and minimising wheel slip. Top speed is 326km/h (203mph). Despite these blistering performance figures, the 675LT Spider returns 24.2mpg on the EU combined cycle, while CO2 emissions remain at 275g/km – the same as the coupé. A three-piece retractable folding hardtop can be opened at speeds up to 30km/h (19mph) to allow for a new level of open-air exhilaration.

Staying true to the ‘Longtail’ ethos, established by the McLaren F1 in the late 1990s, the 675LT Spider has been developed with a focus on light weight and optimised aerodynamic performance. The special nature of the model is supported by the extensive use of carbon fibre for the bodywork. As with the 675LT Coupé, the front bumper with larger splitter and end plates, front under body, side skirts, side intakes, lower side intakes, rear bodyside lower, rear fenders, rear deck, rear bumper, diffuser and ‘Longtail’ Airbrake are all carbon fibre. Lightweight components are also found throughout the powertrain and chassis, all contributing to a dry weight of just 1,270kg. This weight is a full 100kg lighter than the already lightweight 650S Spider, and gives a power-to-weight figure of 532PS per tonne. Due to the inherent strength of the carbon fibre MonoCell chassis, no further strengthening – and associated weight increase – has been added through the removal of the roof, and the 675LT Spider is only 40kg heavier than the Coupé, all due to the retractable roof system.

The dramatic styling and purposeful stance of the 675LT is retained with the Spider variant, with the extended front splitter flanked by front wing end plates, each working the airflow harder and increasing downforce. Sculpted carbon fibre door sills run along the lower edge of the bodywork, flowing in to a smaller air intake ahead of the rear wheels. This sits below the more pronounced side intake, with both feeding clean, cool air into the side radiators which are more prominent to offer increased cooling. The retractable hard top stows below a colour-coded tonneau cover, and the engine remains visible through a lightweight vented polycarbonate engine cover. At the rear, the lightweight titanium crossover twin exhausts exit below the active ‘Longtail’ Airbrake which is 50 percent larger than other Super Series models. This is integrated in to the design of the flowing rear wings and despite the larger size, carbon fibre construction ensures weight is actually reduced. Exposed bodywork across the rear deck and below the rear wing aids engine cooling, while louvres in the flared rear bumper optimise pressure levels.

The 675LT Spider shares the suspension set up and geometry of the Coupé, with the front end sitting on new lightweight springs and a wider track – increased by 20mm. Spring rates are the most track-focused of the Super Series models, with stiffness increased 27 percent at the front and 63 percent at the rear, providing a more rearward balance and allowing for a 40 percent increase in downforce over the 650S Spider.

As standard, the 675LT Spider is fitted with 10-spoke Ultra-Lightweight forged alloy wheels – 19-inch at the front, 20-inch at the rear – and P Zero Trofeo R tyres, developed for the 675LT models in collaboration with technical partner Pirelli. These are the lightest wheel and tyre set ever offered by McLaren. Two Super-Lightweight wheel options are optionally available; a new 20-spoke design, offered in liquid metal or diamond cut finishes, and the five-spoke Super-Lightweight design which debuted on the Coupé.

The lightweight theme continues throughout the interior with Alcantara and bare carbon fibre used extensively. A pair of lightweight carbon fibre-shelled racing seats, modelled on those fitted to the McLaren P1, save a combined 15kg, and feature ‘675LT’ embossed leather to provide enhanced levels of support and grip. As seen in the McLaren P1 and 675LT, heating and ventilation controls are located within the portrait-orientated, centrally-mounted touchscreen, which also operates the four-speaker Meridian audio system, while air conditioning has been removed. The 16kg system can be specified as a no-cost-option.

The ‘By McLaren’ interior themes were first introduced on the 675LT Coupé, and are again available for the Spider model. The range is extended for the 675LT Spider, with the addition of exclusive Xenon Yellow contrast stitch. Simialrly, the full exterior paint palette offered on the 675LT Coupé is available for the Spider model, which includes the new Silica White, Delta Red, Napier Green and Chicane Grey paint finishes. In addition, the newly developed deep golden colour, Solis – which derives its name from the Latin for sun – is a bespoke colour only available on the open-top 675LT Spider.

Further enhancements can be made through the Club Sport Professional Pack, which adds further visual carbon fibre and stealth detailing. Available in Titanium Silver, Storm Grey, Onyx Black and Chicane Grey, the Ultra-Lightweight wheels are stealth finished, while a satin carbon fibre finish is applied to the front wing end plates, lower side air intake and the centre of the rear bumper, along with the side intakes, wheelarches, wing mirrors and ‘Longtail’ Airbrake. McLaren Orange detailing is then applied both externally and internally, with brake callipers, embossed leather and stitching all in the heritage colour made famous by the Formula 1 and Can-Am racers of Bruce McLaren,

While retaining much of the track-focus and capability of the Coupé, the Club Sport Pack – comprising titanium rollhoop, four point harnesses and fire extinguisher – is not available as an option for the 675LT Spider.

Another key characteristic of any Longtail is exclusivity, and the 675LT Spider is no exception. As with the Coupé, production of the 675LT Spider will be strictly limited to only 500 examples, with first deliveries in summer 2016.

It’s show time in the gamblers’ paradise Las Vegas: For the first time ever, Frank M. Rinderknecht, boss of the […]