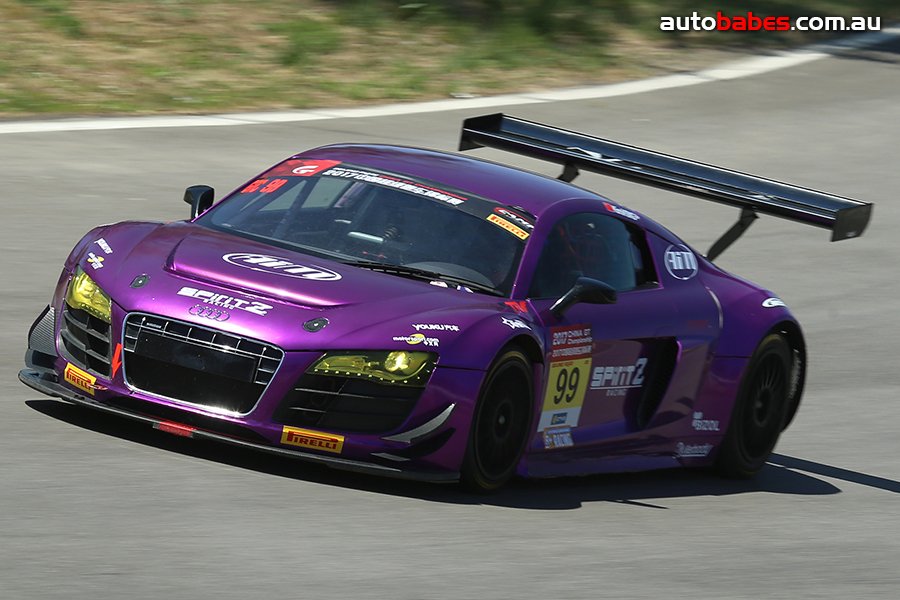 Ultimately victory in GTC was shared between D2 Motorsport’s Huang Xi Zhan and Spirit Z-Racing’s Kimi Qin, the latter having been on the path to two straight victories prior to a mechanical failure in his Audi R8 during the opening race, the team recovering strongly to provide the Chinese driver with a dominant win in race two.

In the GT4 category – which was making it’s China GT debut – the weekend was all McLaren, with the new 570S GT4 in the hands of Roelof Bruins, Dong Liang and David McIntyre taking back-to-back wins, although they were pushed every step of the way by the Xtreme Motorsports KTM X-Bow GT4 of Chen Yinian and Australian Glen Wood. Aston Martin too were well represented, Tian Xu and Yang Meng Jiao claiming two third placed finishes alongside their top qualifying effort for race two.

The big mover off the start was not the pole-sitter Andrew Tang nor the Extreme Motorsports Radical starting alongside, but Thai veteran Suttiluck ‘Bobby’ Buncharoen, the Lamborghini Huracan Super Trofeo driver making a brilliant start from the second row to dive into the lead deep under brakes into turn one – sadly though he couldn’t pull the car up to retain the position, exiting the corner in P3.

Unfortunately for the chasing pack, Buncharoen’s move had caught many by surprise forcing a bottleneck mid-pack which ultimately saw the #900 JRM Porsche make contact and spin into the path of the luckless #15 Top Speed team from Taiwan in their Audi R8. The contact saw both cars eliminated, the Porsche coming off second best after stalling across the race line in turn one prompting an immediate safety car intervention.

Up front Tang had gotten away cleanly with the lead, but he was soon under fire from Kimi Qin in the all-purple Audi R8 LMS, the Chinese driver very quickly through to the lead with an aggressive move on the young Singaporean driver but his pace advantage was very quickly discounted as the safety car hit the circuit.

On the restart Qin was again able to open up a small lead before running into trouble on the exit of turn eight, the left rear wheel bearing determined to be the culprit bringing Qin to a stop on the circuit, allowing Andrew Tang to retake the lead from Buncharoen, Hunag Xi Zhan and the recovering Radical RXC of Xu Wei and Leng Kang.

Further back in the pack the #10 Kings Lamborghini Super Trofeo was having a tough time settling in, spinning on the exit of turn one before recovering to be involved in an incident with the #303 JRM Audi of Bian Hao who ultimately lost a wheel as the result of the impact, forcing the Audi into immediate retirement, prompting a return for the McLaren safety car.

With Andrew Tang comfortably off into the distance on the restart, focus turned to the battle between the #22 Lamborghini and the #68 Radical as they fought over track position, that battle ultimately resolved just after the compulsory pit stop with the Radical crawling to a stop out of turn 11 with a broken driveshaft.

That left a battle between Huang, Pan Chao in the #777 Porsche and Buncharoen who started to close in on the leaders but it wasn’t to be, the #22 Lamborghini driver taking the win with Chao second and Buncharoen third.

The Helian Xingzhong and Zhou Fan JRM Lamborghini was next ahead of their team-mates Li Xuefeng and Tian Lijing in the #333 Porsche, then the Jiang Shiling/Li Huan in the #10 Kings Lamborghini.

Sadly JRM mainstays Xiao Min and Zhang Dasheng failed to complete the season opener, a gearbox technical issue sidelining them from the opening race and ultimately the event.

Having qualified on pole (1:05.033) during the second leg of qualifying on Friday afternoon, Kimi Qin looked every bit the winner in the brilliant purple Spirit Z-Racing Audi R8 on the grid before the start of the race, waving to his legion of purple fans in the grandstands, the Chinese driver looking to make amends for the frustration of failing to finish the opening race.

Pan Chao would start alongside in the #777 JRM Porsche, from Huang in the #22 D2 Lamborghini, Buncharoen in the Lamborghini and the #15 Top Speed Audi.

Off the line Qin held the field at bay to lead into turn one with the #22 Lamborghini close behind. Pan Chao held on to third place, with Buncharoen and the #15 Audi in close pursuit.

Behind the leaders the big mover was the #68 Radical which was forced to start rear-of-field after failing to record a qualifying time as a result of the driveline dramas they’d faced in the opening race, very quickly the beautiful black RXC was up onto the tail of the top five.

With Qin leading the focus turned to the battle for P2 between the #22 Lamborghini of Huang and Pan Chao in the orange JRM Porsche, the Lamborghini ultimately working it’s way into second as behind them, the hard charging #15 Audi from the Top Speed team came off at turn six, but was fortunately able to continue after avoiding the gravel trap, although they would ultimately be forced to withdraw on lap 30.

Pan Chao was amongst the first of the drivers in for the compulsory pit stop to hand over to Andrew Tang, the young Porsche star firing out of pit lane with a sequence of quick laps to put himself within reach of race leader Qin and the #22 Lamborghini, but just as he looked to make a move on the deficit to the leader, he came under fire from the charging Radical to make it a three-way battle at the front.

The big mover though was New Zealander Will Bamber – the younger brother of Porsche Le Mans star Earl Bamber – had taken over the wheel of the #303 Audi from team-mate Bian Hao and was comfortably the fastest driver on the circuit.

By the closing lap Bamber had closed onto the rear of the battle for second, with Huang still holding point at the front of that pack, but what seemed like an overly aggressive application of throttle on the exit of turn four spun the D2 Lamborghini, his rivals forced to take avoiding action in an effort to miss him.

That ultimately forced Tang – who had been poised to make the move for second – to take to the grass, whilst Bamber took advantage firing right instead of left like Tang to grab third as the Radical moved into P2, Bobby Buncharoen too took advantage to close back to fifth at the line, the hapless Huang ultimately unable to continue leaving him with a DNF to add to his opening round win.

Tang recorded a frustrated fourth, but the result was enough to elevate he and Pan Chao to the GTC points lead, whilst the top three – all of whom had failed to finish the opening round on Friday – celebrated their points haul and return to the championship battle.

Behind Buncharoen the #900 Porsche too made a great recovery after their opening corner demise in race one to claim sixth, with their JRM team-mates Li Xuefeng and Tian Liying seventh in an identical 991 Porsche Cup car, whilst the #998 JRM Lamborghini rounded out the GTC field.

Having qualified on pole position for the opening GT4 race of the season, it was perhaps no surprise that the pace-setter during the very first GT4 round of China GT was the new McLaren 570S GT4 of Roelof Bruins and David McIntyre, although for the team, they needed a substitute driver for the opening race with Chinese driver Dong Liang replacing the Englishman until his Saturday arrival.

That made little overall difference in the end, with Bruins setting a blistering pace during the opening leg of race one, to hand Liang a comfortable lead, although young Australian driver Glen Wood – a driver with a good pedigree when it comes to GT competition – charged through to lead the class in the Xtreme Motorsport KTM X-Bow GT4. That was before an errant GTC Lamborghini stalled his progress in the dying stages, allowing Liang to take the position back and cross the line by a mere 2.1-seconds for the first GT4 win of the new championship.

Wood and team-mate Chen Yinian were second, with the first of the Aston Martin Vantage GT4s – Tian Xu and Yang Meng Jiao – in position #3. Sadly for the two other pristine V8-powered Vantage GT4s, they failed to finish after running into the gravel traps around the circuit late in the race, but not before showing impressive pace to make it a three-way battle for third between the English built supercars.

After their opening race victory, the pressure was on David McIntyre to continue ‘The Winning Team’s’ performance in race two, but his job was made a lot easier thanks to an impressive display of driving by Bruins who opened up a lead of almost a lap by the time the compulsory pit stop window opened

Again their battle would be with the Xtreme Motorsport KTM, and as that team did in race one, it was Dong Liang who handed the car to Glen Wood to try and track down the McLaren, and he did just that, yet despite a number of safety car interventions. Ultimately the Australian driver fell just short for the second race, Bruins and McIntyre across the line for the win by just over four seconds.

Third once more was the Tian Xu/Yang Meng Jiao Aston Martin Vantage which had set the GT4 pole position time during Friday afternoon’s second qualifying session, whilst fourth were their team-mates, Yang Zhinyi and Sheng Yanwen in the #721 Aston Martin.

Team’s now enjoy a two month break until the second event of the 2017 China GT Championship at Ordos International Circuit on 8-9 July.

Keep up to date with the China GT discussion via Facebook (ChinaGTChampionship) and through Twitter (OfficialChinaGT) whilst further news and information can be reviewed on the China GT website; www.chinagt.net

China GT was launched in 2016 and is promoted by China GT Management Co. Ltd. Sanctioned by the Federation of Automobile and Motorcycle Sports of China (CAMF), the championship features the world’s best automotive brands competing in GT3, GTC and GT4 classes. China GT is based on the principles of being ‘Just, Fair and Open’ so to attract both Chinese and international drivers and teams.

Follow China GT via https://www.facebook.com/China-GT-Championship-152716748470684/ and get involved in the conversation on https://twitter.com/OfficialChinaGT

After a highly successful first weekend of the 2019 Blancpain GT World Challenge Asia at Sepang, which saw Craft-Bamboo Racing […]